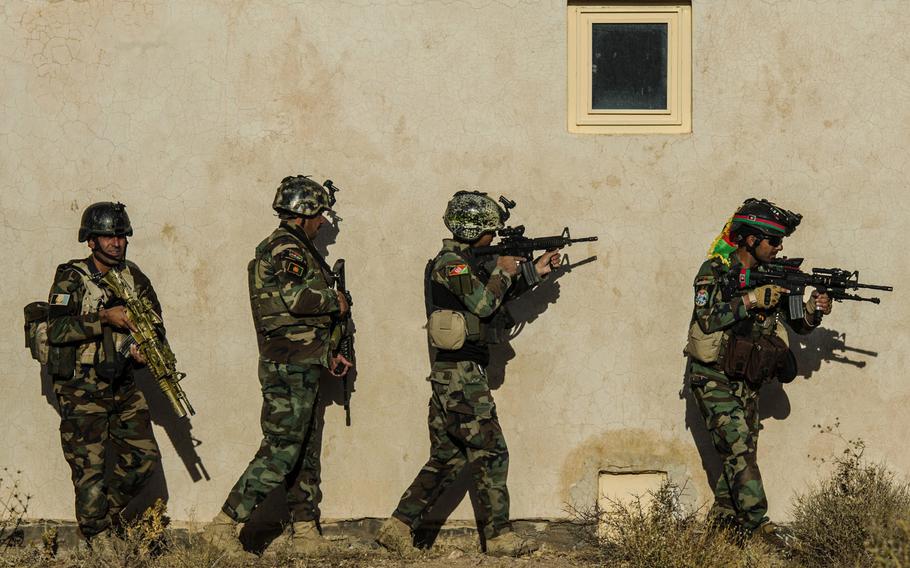 A team of Afghan Special Security soldiers close in on a compound during a close quarters combat exercise at Herat, Afghanistan, on Oct. 14, 2017. (Xavier Navarro/U.S. Air Force)

KABUL, Afghanistan — The U.S. military is keeping from the public important data on Afghanistan’s security forces as insurgents continue to make gains, the watchdog for U.S. spending in the country said in a new report.

The number of Afghans in the army and police force, their casualty and attrition rates and the condition of their equipment are some of the details being kept secret, the Special Inspector General for Afghanistan Reconstruction, or SIGAR, said.

SIGAR said that blocking release of the information would hinder its efforts to gauge progress in the 16-year war.

Most of the roughly $121 billion that the U.S. has given Afghanistan for reconstruction since 2002 has gone to develop the Afghan National Defense and Security Forces.

“The increased classification of ANDSF data will hinder SIGAR’s ability to publicly report on progress or failure in a key reconstruction sector,” the SIGAR report said.

Gen. Dawlat Waziri, spokesman for the Afghan Defense Ministry said Afghan officials should decide when to release their figures and that they would continue to do so on occasion.

“Since we don’t announce any data about the foreign forces, they shouldn’t publish things about us,” Waziri told Stars and Stripes.

This is the second time the U.S. military has sought to classify information on ANDSF capabilities. In 2015 — after international combat operations in Afghanistan ended and the Taliban gained ground across the country — NATO’s Resolute Support mission restricted the answers to more than 30 SIGAR questions. Those were eventually made public.

In its latest report, released on Monday, nine questions were redacted, SIGAR said.

“For the first time in eight years, USFOR-A restricted the public release of ANDSF assigned strength figures — the number of personnel actually serving in a force element at a given time — to approximate figures,” the report said.

It said USFOR-A also classified the number of personnel authorized by the Afghan government.

News of the restricted data came shortly after the United Nations conducted a review of its mission in Afghanistan and said a worsening security situation continued to weaken institution building and development. Its data showed a record level of armed clashes this year between Afghan forces and militants.

Afghan forces sustained 2,531 deaths and 4,238 injuries from the beginning of the year until May 8, SIGAR said in its July quarterly report. More than 6,700 deaths and 12,000 injuries were recorded among the forces in all of 2016. SIGAR described the current casualty rate, which could affect morale and lead to greater attrition, as “unsustainable.”

Elsewhere in its latest report, SIGAR warned that the Afghan government’s control over territory continues to wane.