Report: US failed to track $1B in weapons and vehicles sent to Iraq A Peshmerga soldier loads ammunition into his magazine in preparation for squad-based training near Erbil, Iraq, on Oct. 14, 2015. According to military officials, Combined Joint Task Force-Operation Inherent Resolve coalition partners had planned in 2015 to provide millions of rounds of ammunition, as well as small arms, machine guns, mortars, radios, vehicles, and other equipment over the next several months to Iraqi Security Forces. Some of this equipment has been purchased using the Iraq Train and Equip Fund. (Tristan Bolden/(U.S. Army )

A Peshmerga soldier loads ammunition into his magazine in preparation for squad-based training near Erbil, Iraq, on Oct. 14, 2015. According to military officials, Combined Joint Task Force-Operation Inherent Resolve coalition partners had planned in 2015 to provide millions of rounds of ammunition, as well as small arms, machine guns, mortars, radios, vehicles, and other equipment over the next several months to Iraqi Security Forces. Some of this equipment has been purchased using the Iraq Train and Equip Fund. (Tristan Bolden/(U.S. Army ) 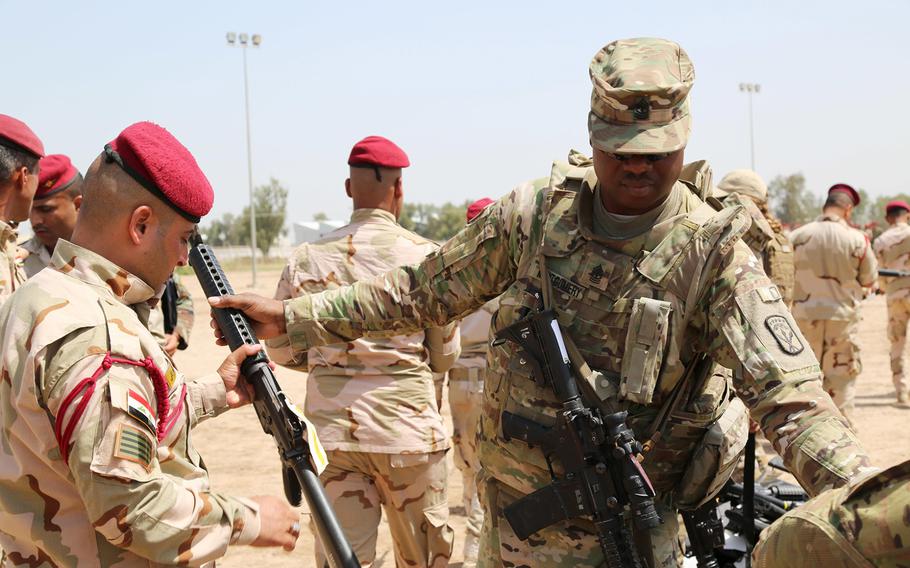 The U.S. Army failed to properly account for more than $1 billion in equipment, including vehicles, weapons and ammunition, before transferring it to the Iraqi government, according to a 2016 Pentagon audit obtained by Amnesty International and released Wednesday.

The equipment was purchased under the Iraq Train and Equip Fund, which was created in 2015 and initially funded by $1.6 billion under that year’s National Defense Authorization Act to pay for tens of thousands of rifles and body armor, as well as large quantities of trucks and other equipment. Appropriations in 2016 and 2017 together amount to about another $1.6 billion for the fund.

The program was created to supply Iraqi and Kurdish forces in the fight against the Islamic State. But Amnesty said accountability problems have long plagued U.S. efforts to supply Iraqi forces with arms and equipment, citing a Government Accountability Office report from July 2007 that found, among other things, a discrepancy of 190,000 weapons in government data that tracks arms transfers.

“After all this time and all these warnings, the same problems keep re-occurring,” Patrick Wilcken, Amnesty’s arms control and human rights researcher, said in a statement. “This should be an urgent wake-up call for the U.S., and all countries supplying arms to Iraq, to urgently shore up checks and controls.”

Operation Inherent Resolve, the U.S.-led anti-ISIS coalition, purchased $1.3 billion worth of equipment in fiscal 2015, including everything from body armor, navigation sets and magazine pouches to ambulances and cargo trucks, the audit found.

But the Army’s 1st Theater Sustainment Command, which is responsible for maintaining visibility and property accountability of the equipment before its transfer to the Iraqi government, lacked an effective way of tracking the equipment. It “could not provide the immediate quantity, dollar value, and location of equipment on hand in Kuwait and Iraq,” including vehicles and ammunition, the audit found.

The command, which includes subordinate units in Kuwait and Iraq, lacked a centralized tracking database and relied on multiple spreadsheets developed by the lower commands, as well as hand receipts for some equipment. Its records were not accurate or up-to-date and the use of manually populated spreadsheets increased the risk for human error in the data, auditors said.

In response to the audit, the sustainment command developed a short-term solution of using a centralized spreadsheet on a shared drive. Officials were working toward a long-term solution that would implement automated systems by late 2016, according to the audit.

But Amnesty urged the U.S. and Iraq to agree to stricter arms control measures and stressed the importance of the U.S. monitoring equipment even after it’s supplied to partner forces. The rights group cited concerns raised by a previous Pentagon audit that found the Iraqi army had poor oversight of its own stockpiles.

Earlier this year, Amnesty also released a report that found weapons from Iraqi military stockpiles, including tanks, artillery and small weapons supplied by the U.S. and more than a dozen other countries had made their way into the hands of militias involved in human rights abuses.

“Sending millions of dollars’ worth of arms into a black hole and hoping for the best is not a viable counterterrorism strategy — it is just reckless,” Wilcken said.