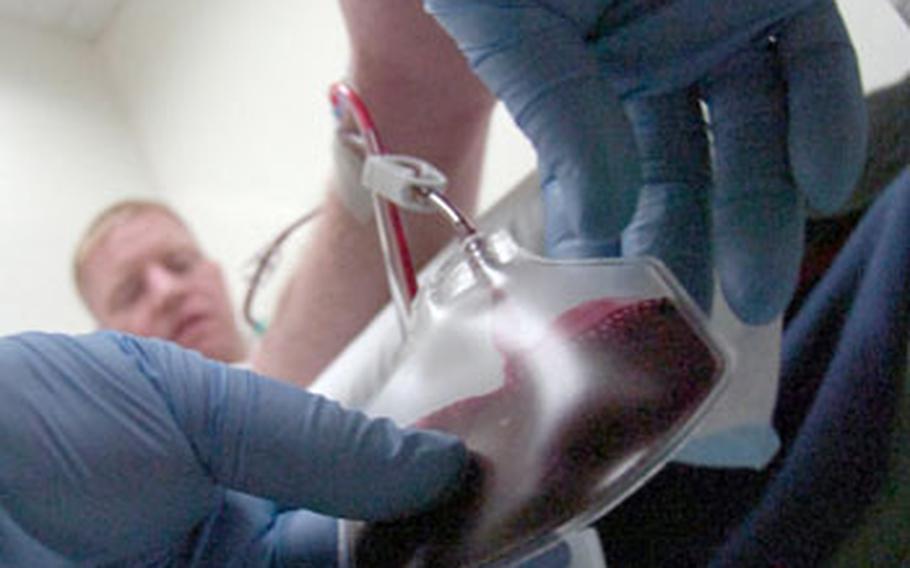 A labratory technician for the 440th Medical Detachment (Blood Support) ensures that all equipment is functioning properly as Sgt. Mark Poczobut, a laboratory NCO for the 440th BSD donates blood platelets. Blood platelets donated in Bagram Air Field provide much of Afghanistan with the highly perishable blood component. (Pfc. Derek L. Kuhn/Courtesy of the U.S. Army)

For years, the use of unscreened blood transfusions exposed severely wounded servicemembers and other trauma patients in Iraq and Afghanistan to the inherent risk of diseases such as HIV, hepatitis and malaria, according to medical experts who advise the secretary of defense.

Battlefield attacks that resulted in mass casualties or severe injuries often overtaxed the military&#8217;s blood supply system until 2007, meaning medics collected fresh blood from those on site for emergency treatment of the wounded, the Defense Health Board wrote in a June 2008 report.

The unscreened blood transfusions, however, did not meet federal safety standards required of all other military blood supplies.

It was used in a "significant" number of cases until the practice was curbed dramatically due to the board&#8217;s criticism and advances in the war zone blood supply about two years ago, according to the report and the military&#8217;s blood supplier, the Armed Services Blood Program.

Use of unscreened blood has dropped by about 80 percent since 2007, when facility upgrades and new high-tech storage facilities allowed the military to provide more federally regulated blood downrange, said Col. Francisco Rentas, director of the Armed Services Blood Program.

But the emergency transfusions meant "wounded servicemembers may survive the acute event only to suffer from potentially fatal or chronically debilitating transfusion-associated infectious diseases in the future," the Defense Health Board found.

Unscreened blood transfusions are still used in cases of severe trauma and mass casualties if no other option is available, officials said.

It is unclear exactly how many servicemembers, civilians and combatants have received the unscreened blood and how many subsequently contracted diseases.

Medical statistics paint an incomplete picture but indicate the transfusions occurred regularly in Iraq and Afghanistan and have resulted in at least a handful of recorded health issues.

The U.S. Army Institute of Surgical Research tested 2,831 units of unscreened blood transfused in Iraq and Afghanistan between May 2003 and February 2006. Testing showed three units were tainted with hepatitis C and two were positive for human T-cell lymphotropic virus, which can later develop into untreatable, fatal leukemia and other debilitating diseases, the institute reported in a 2007 study.

None of the samples tested positive for hepatitis B or human immunodeficiency virus, which causes AIDS, the report said.

"No more than seven U.S. casualties have been exposed to [emergency unscreened blood] which was subsequently found to be reactive for viral markers," the U.S. Army Medical Command said in a statement to Stars and Stripes last week.

One of those cases became a hepatitis C infection, the Army said.

The transfusions also were used on Iraqi patients, other foreign civilians and coalition servicemembers.

The practice has the approval of the Department of Defense when no federally screened blood is available, but has never been encouraged. No formal guidelines for the transfusions have ever been created, the Defense Health Board found.

The vast majority of the military&#8217;s blood supply is collected, tested and supplied by the Armed Services Blood Program under the same U.S. Food and Drug Administration blood safety standards adhered to by the Red Cross and other civilian blood banks.

The emergency unscreened transfusions on the battlefield are used only when ASBP blood is unavailable.

Blood donations have flowed into the ASBP from the United States since the wars in Iraq and Afghanistan began but the storage capacity can be limited downrange, said Maj. Toni Mattoch, deputy director of the ASBP from 2004 to 2007.

The military often overstocked blood, and it would often expire before it could be used, the Defense Health Board reported. Only 2 percent of the blood stocked in the first year of the Iraq war was used.

The report pointed out that sporadic large-scale attacks could quickly deplete locally stored blood supplies, driving up the need for the emergency transfusions.

Instant testing kits for HIV and hepatitis that are more than 90 percent accurate are now supplied in combat zones to provide safer emergency transfusions when necessary, Rentas said.

The Armed Services Blood Program has been pushing for years for FDA approval of freeze-dried plasma, a powdered form of the blood component used to treat trauma, according to Col. Francisco Rentas, director of the Armed Services Blood Program. The powdered plasma is lightweight, has a longer shelf life and can be reconstituted quickly on the battlefield, Rentas said.

"That is one of our biggest challenges now, to get plasma in theater, because it has to be kept cold," he said.

When could the freeze-dried plasma become available on the battlefield? After meetings last month with the FDA, Rentas said, the new plasma product could be in use in one to two years.