Report: Troops, vets to get checked for chemical exposure in Iraq 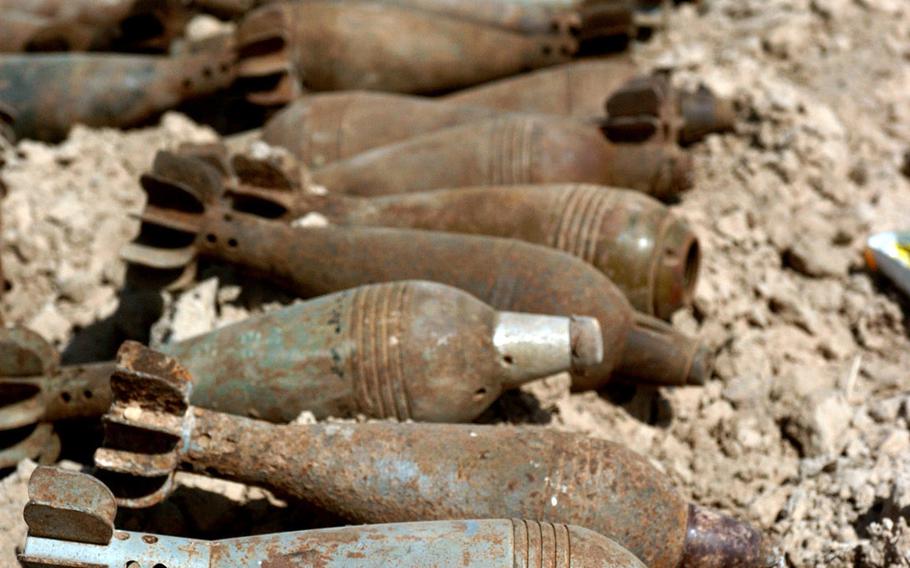 Mortar rounds are stacked and organized at a weapons cache northwest of Baghdad on Oct. 4, 2005. The cache was discovered by troops of 70th Engineer Battalion, 3rd Brigade, 1st Armored Division in a remote rural area on Sept. 28. (U.S. Army)

Mortar rounds are stacked and organized at a weapons cache northwest of Baghdad on Oct. 4, 2005. The cache was discovered by troops of 70th Engineer Battalion, 3rd Brigade, 1st Armored Division in a remote rural area on Sept. 28. (U.S. Army) 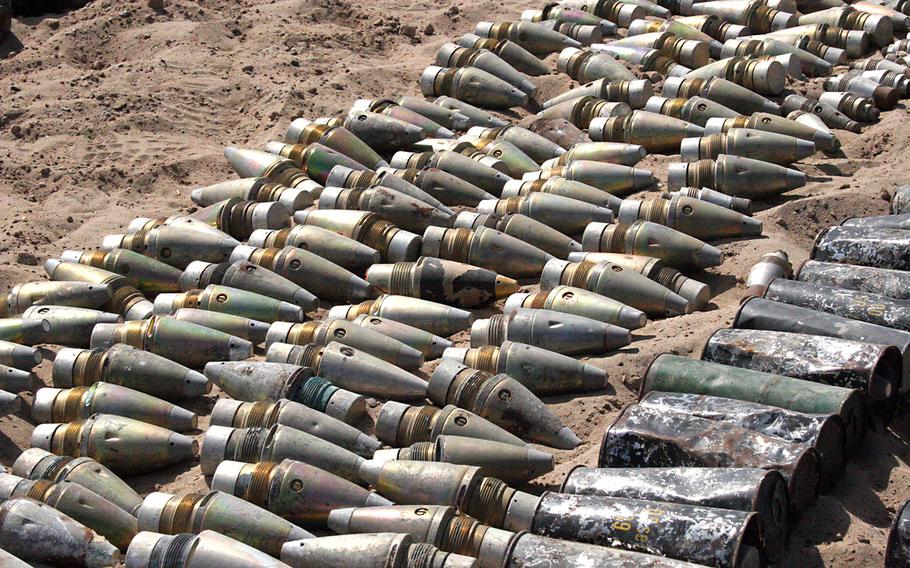 The Pentagon will offer medical examinations and long-term health monitoring to servicemembers and veterans exposed to chemical warfare agents in Iraq as part of a review of how the military handled encounters with chemical munitions during the American occupation, The New York Times reported Wednesday.

An Oct. 15 Times story found that while the United States had gone to war looking for an active weapons of mass destruction program, troops instead quietly found and suffered from the remnants of the long abandoned arsenal.

Since that article, which detailed instances of exposure that the military kept secret in some cases for nearly a decade, more veterans and servicemembers have come forward, the Times reported. To date, neither the Pentagon nor any of the services have released a full list of chemical weapons recoveries and exposures.

The Times found that the military did not follow its own guidelines in the initial care of many patients, and did not establish a means for tracking their health, as guidelines also required.

In response, two senior Army doctors said in interviews this week that new medical examinations for troops and veterans who were exposed to chemical munitions would begin in early 2015. The Navy too has announced it will ramp up care.

Maj. Gen. Gary Cheek, deputy commanding general for Army operations, said the accounts of poor medical care and follow-up were disturbing. “I am not going to try to excuse it,” he said.

But he defended the classification of chemical-weapons incidents, telling the Times that the military did not want to provide information to insurgents that Iraq’s old chemical munitions “could be effective.”

Rear Adm. John Kirby, Defense Secretary Chuck Hagel’s spokesman, suggested that position is under review. “The secretary obviously remains committed to preserving operational security but also recognizes the value in making available as much information as possible to veterans preparing — or continuing to file — VA claims,” he said.

The new accounts increase to at least 25 the number of U.S. troops exposed to chemical agents.

The latest accounts mostly fit a familiar pattern, the Times wrote. They include two Army bomb disposal technicians who picked up a mustard shell at a roadside bombing in 2004; two Navy disposal technicians who handled mustard shells in 2006 and 2007; and members of an Army infantry platoon who said they were denied decontamination and swift medical evaluation after inhaling mustard vapors in 2008, when soldiers were destroying a buried chemical-munitions stockpile.

The accounts of still other troops and veterans suggest there were more instances of exposure, and that there could be a larger number of exposed veterans than the services have acknowledged or perhaps even know about, according to the report.

Jonathan Martin, a former Marine who was exposed to mustard agent and whose exposure was confirmed by the Marine Corps, told the Times that when he tried to tell the Department of Veterans Affairs about his exposure he had been doubted. “It would be nice,” he said, “to get some recognition that this actually happened.”