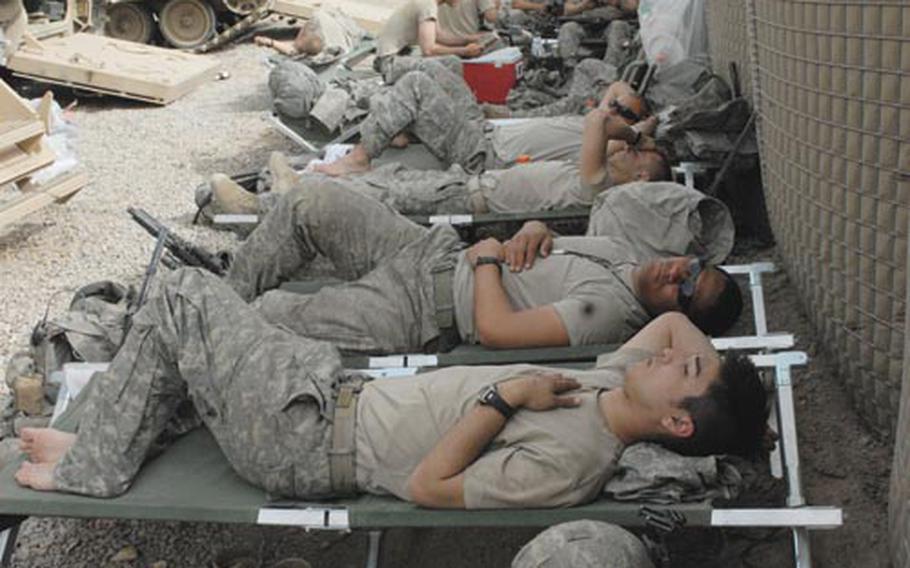 GRAFENW&#214;HR, Germany &#8212; Army doctors will recommend soldiers deployed to combat zones such as Iraq and Afghanistan get seven to eight hours of sleep each night after research suggested such a move would result in fewer accidents, friendly-fire incidents and cases of ethical misconduct.

The recommendations are contained in a draft of proposed changes to Army sleep guidelines, which currently suggest infantrymen get a minimum of four hours of sleep each day during deployment.

"Soldiers require 7-8 hours of good quality sleep each night to sustain operational readiness," according to a draft of proposed new Army sleep guidelines, obtained from the U.S. Army Medical Command this week. "There is no &#8216;MINIMUM&#8217; sleep requirement [but] anything less than 7-8 hours per 24 hours will result in some level of performance degradation."

While essential for many aspects of operational success, sheer determination or willpower cannot offset the mounting effects of inadequate sleep, the guidelines state.

"Sleep should be viewed logistically as an item of resupply, like water, food, fuel, and ammunition. Commanders need to plan proactively for adequate resupply of sleep for themselves and their subordinates," the guidelines state.

The longer a soldier goes without sleep, the more his thinking slows and becomes confused. Lapses in attention occur, and speed is sacrificed in an effort to maintain accuracy. Tasks such as requesting fire, integrating range cards, establishing positions and coordinating squad tactics are more susceptible to sleep loss than well-practiced, routine physical tasks such as loading magazines and marching, the guidelines state.

According to the guidelines, the people who should sleep the most are unit leaders who make mission-critical decisions.

Sleep is also important for soldiers who are assigned to guard duty, perform tedious work such as monitoring equipment, or judge and evaluate information. Soldiers whose only duties involve physical work should be the last in line for sleep, the guidelines state.

"Most Leaders and soldiers underestimate their own total daily sleep need, and fail to recognize the effects that chronic sleep loss has on their own performance," the guidelines state.

Cited in trialLack of sleep was cited as a factor in the trial of U.S. Army medic Sgt. Michael Leahy Jr., who received a life sentence last month in Vilseck, Germany, for the premeditated murder of four Iraqi detainees in Baghdad in March 2007.

Leahy&#8217;s attorneys argued that lack of sleep, combined with combat stress, meant their client did not know what he was doing when he shot two of the detainees and dumped their bodies in a canal.

Col. Charles Hoge, an expert on combat stress based at Walter Reed Army Medical Center, who appeared as a defense witness in the case, testified that the latest research shows that sleep deprivation can affect moral-decision making. Hoge said soldiers deployed to Iraq get an average of five to six hours sleep each night.

Going without sleep is similar to having too much to drink, says Dr. Thomas Balkin, chief of the Department of Behavioral Biology at Walter Reed Army Institute of Research, the military&#8217;s leading sleep research center.

"The mission of our department is to find ways to sustain soldier performance during periods of sustained operations when there is no opportunity to sleep," he said.

A soldier who gets four hours of sleep each night for four to six days experiences impairment on par with that of a 180-pound man who has consumed five alcoholic drinks, he said.

"Sleep deprivation doesn&#8217;t reduce fine motor skills and coordination; being drunk does. But both result in deactivation of the prefrontal cortex," Balkin said.

Scans of sleep-deprived brains, when compared to scans of alert subjects&#8217; brains, show less activity in the prefrontal cortex &#8212; the part of the brain associated with high order functions like problem-solving, judgment and moral decision-making, he said.

A yet-to-be-published study by former Walter Reed researcher Dr. Steven Hursh, now president of the Institutes for Behavioral Resources in Maryland, shows a linear relationship between sleep deprivation in railroad employees and the rate and cost of train accidents, he said.

Soldiers forced to sleep for 10 hours, who were then sleep deprived for a week, performed better than soldiers who had only a normal night&#8217;s rest on the first night. The soldiers who had the extra rest at the start of the week also recovered faster when they returned to a normal sleep pattern, he said.

Getting enough rest could be a vital weapon when situational awareness is important.

"In the War on Terror, where very soldier is a decision maker, it is important to have everyone topped off as much as they can with sleep," Balkin said.

"Guys who are patrolling are constantly surveying the environment looking for signs of potential danger. With sleep loss you are less likely to notice these things or notice them relatively slowly," he said.

Sleep-deprived soldiers still shoot accurately but knowing what to shoot can be a problem, Balkin added.

"Friendly-fire accidents are more likely when a soldier is sleep deprived. You are less likely to know which way is forward and have situational awareness of the battlefield," he said.

Research shows that stimulants used by Special Forces and pilots in certain situations, such as caffeine, dexamphetamine and modafinil, don&#8217;t erase all the effects of sleep loss, he said.