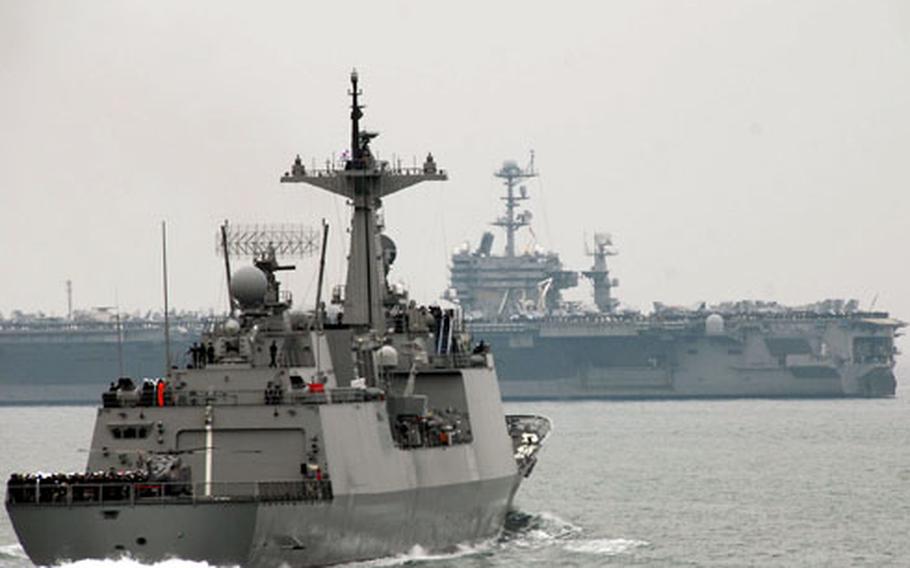 The ROKS Kangkamchan steams toward the USS George Washington on Tuesday during South Korea’s International Fleet Review "pass and review." The George Washington arrived in the Pacific last month after undergoing repairs. (Bobbie G. Attaway/Courtesy of the U.S. Navy)

But 90 gallons were stashed in an uptake space instead, later becoming fuel for the May 22 blaze that cost the Navy $70 million and several months of ship repairs.

These and other details about the fire are now available online on the Pacific Fleet&#8217;s Web site. The unclassified report, posted in response to a Freedom of Information Act request from the San Diego Union-Tribune, cites shortcomings that led to the fire, including an environment where 90 gallons of hazardous material could be "stowed within the ship with little likelihood of discovery."

"This fire was entirely preventable," Pacific Fleet Commander Adm. Robert Willard stated in the report, calling many to task, including senior leadership and those associated with fire prevention, readiness and training and firefighting management.

The ship&#8217;s commanding and executive officers were subsequently removed and reassigned to other posts.

The report recommends consideration of administrative and disciplinary action against 18 engineering and hazardous materials personnel and an additional five people in charge of firefighter training and management. Six sailors, besides the commanding and executive officers, were disciplined for their roles in the fire.

Names, identities and specific punishments were blacked out of the report due to privacy exemptions.

Willard also singled out many crew members for their "courage and resolve" and their efforts to rescue their shipmates, some of whom were trapped for several hours.

"Their actions exemplify our Navy core values of honor, courage and commitment," he said.

The USS George Washington has since arrived in Yokosuka, Japan, to take its place as the only nuclear-powered aircraft carrier forward-deployed to Japan. After a short homecoming, the ship is currently at sea.

But preparing for Japan, a highly political move due to local concerns about nuclear safety, was no excuse to take eyes off what was happening below decks, Willard said in the report.

"Though USS George Washington was involved in a complex series of events to culminate in a transfer to the [Forward-Deployed Naval Force] and there were many important issues on the captain&#8217;s plate," he wrote. "Deficiencies such as these could not afford to become overshadowed by the next major event."

For the complete report, visit www.cpf.navy.mil/foia_rr.shtml.