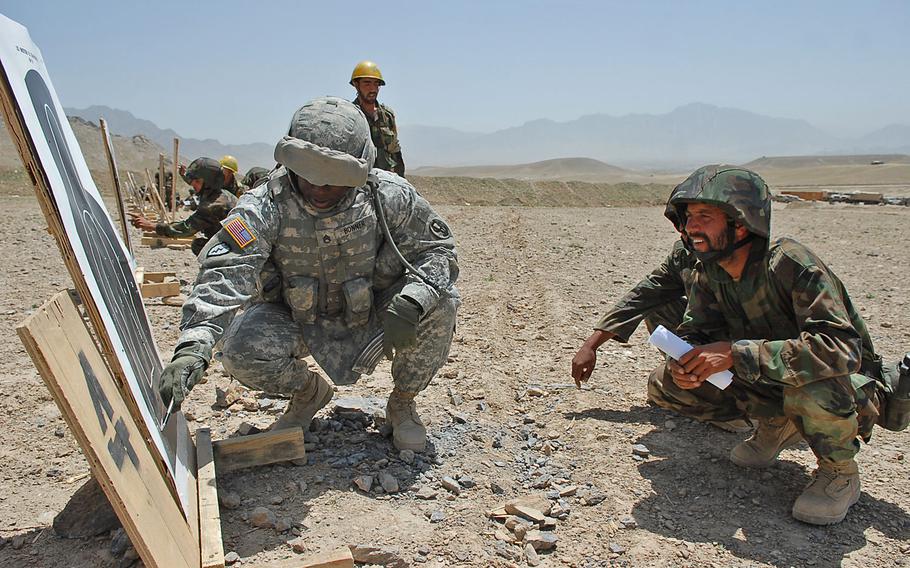 A soldier shows Afghan army recruits where they hit the target on a range at Kabul Military Training Center in 2007. U.S. training methods to help build Afghanistan's police and armed forces are partly to blame for the forces' inability to provide adequate security for the country, even after 15 years of international assistance, a U.S. government watchdog said Thursday. (Michael Abrams/Stars and Stripes)

See an interactive SIGAR summary of the report here, or read the full report at the bottom of this story.

KABUL, Afghanistan — TV shows used as training guides and “cut-and-paste activities” were among the flaws found by a U.S. government watchdog report as it examined why Afghanistan’s forces are unable to secure the country after 15 years of international assistance.

The Special Inspector General for Afghan Reconstruction’s latest report on Afghanistan’s security forces described a U.S. effort that for too many years either had the wrong mix of advisers or implemented strategies from other nations that didn’t fit Afghanistan.

SIGAR particularly criticized community-policing training for 100,000 Afghan police officers, which was performed by U.S. Army advisers, infantry officers and, in at least one case, an Army helicopter pilot. This militarized the force and resulted in an ongoing “identity crisis” within the Afghan National Police, SIGAR said.

“One U.S. officer watched TV shows like ‘Cops’ and ‘NCIS’ to learn what he should teach,” SIGAR director John F. Sopko said, while speaking at a gathering in Washington on Thursday.

The report said the U.S. training effort was ill-prepared from the outset, failing “to understand the complexities of the mission,” and highlighted early U.S. partnerships with independent militias and politically constrained deadlines by Washington as undermining factors.

“Ultimately, the United States designed a force that was not able to provide nationwide security, especially as that force faced a larger threat than anticipated after the drawdown of coalition military forces,” the 283-page SIGAR report said.

Despite the poor results of an effort that has cost the U.S. $70 billion since 2002, Sopko said he was “cautiously optimistic” moving ahead.

The U.S. and Afghans have already started work on some of SIGAR’s 35 recommendations, which the office began developing as a “lessons learned program” in 2014 at the behest of former U.S. military and diplomatic leaders in Afghanistan.

“The (Afghan forces are) fighting hard, and improving in many ways,” Sopko said. “But we have to do a better of job of assisting their growth. Smarter and more appropriate security assistance is vital, now in Afghanistan, and later in whatever new contingencies arise.”

Other recommendations by SIGAR included extending the reach of the U.S. military’s mission below the corps level, more focus on the Afghan air force and creating a new group stateside to train, advise and assist commands in Afghanistan.

Senior U.S. and NATO officials took on the security training mission with little or no input from senior Afghan officials from 2002 to 2015, the report stated. Meanwhile, the U.S. tried to apply training from elsewhere that didn’t apply to Afghanistan.

“At one point, training sessions for Afghan police were using PowerPoint-based curricula from the U.S.-NATO Balkan operations,” Sopko said. “Such cut-and-paste activities, lifted from one country and slapped onto another like a decal, are not likely to boost the prospects for overall success.”

The report comes amid deteriorating security within Afghanistan. The Taliban has made significant gains and is said to control more territory now than at any other time since the U.S.-led invasion ousted them from power in 2001.

In response to the advances, and highlighting the Afghan forces’ struggles, Defense Secretary Jim Mattis on Monday said more than 3,000 additional U.S troops were on their way to Afghanistan — adding to the 11,000 already there — to provide extra support to their Afghan counterparts.

President Ashraf Ghani, addressing the Asia Society in New York on Wednesday, said the next phase of reforming Afghanistan’s security forces would focus on the police.

“With the civilian advisory mission mostly stuck behind embassy walls in Kabul … there are limits on what can be achieved,” Sopko said.