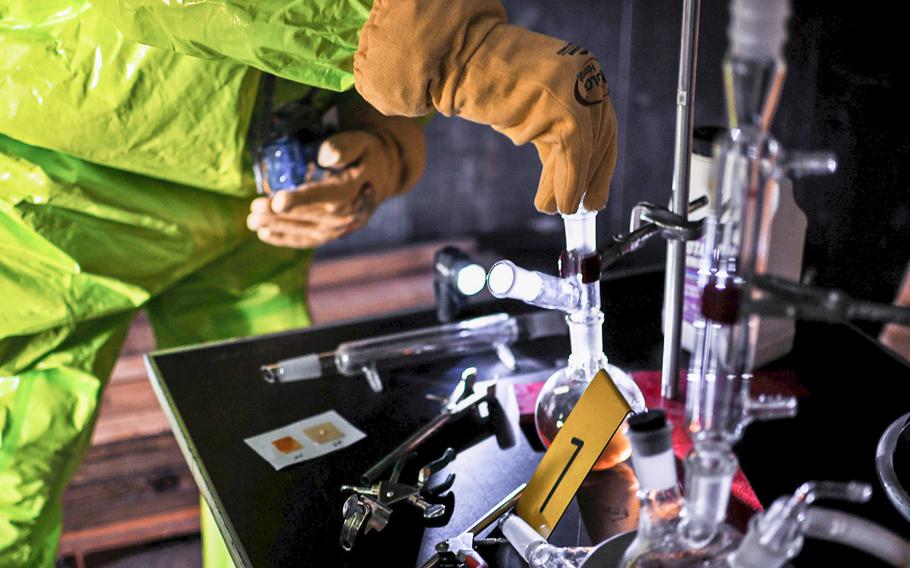 An Illinois National Guardsman collects a sample from a sarin lab during a weapon of mass destruction exercise in Peoria, Ill., on June 8, 2014. A report released in June 2017 found that officials at the Army’s Dugway Proving Ground in Utah and a contractor that facility was using to care for chemicals did not properly inventory its sarin. (Lealan Buehrer/U.S. Air Force)

WASHINGTON — The same Army laboratory that mishandled anthrax in 2015 leading to a nationwide scare might also have lost a small amount of the chemical sarin, the Pentagon’s inspector general has found.

In a report released this month, the inspector general for the Department of Defense found officials at the Army’s Dugway Proving Ground in Utah and a contractor that facility was using to care for chemicals did not properly inventory its sarin, a nerve agent that can be fatal to humans if they come in contact with it.

“Therefore, custodians cannot identify and account for leaks, evaporation, or theft that may have occurred,” the inspector general found. “Furthermore, Dugway officials did not immediately notify the chemical materials accountability officer of a 1.5-milliliter shortage of … sarin identified during an April 19, 2016, inventory nor did they properly document the results of that inventory,” the investigation found.

Dugway and its contractor also used different methods to seal the containers, the inspector general found.

“Dugway used stainless steel cylinders and ammunition cans sealed with tamper evident seals; and the contractor used re sealable plastic containers sealed with tape, which provides no assurance that only authorized personnel had access,” the investigation found.

It would be difficult to tell whether sarin was removed from the facility or it evaporated, due to the amount that was reported missing and how it reacts with the environment, said Dan Kaszeta, a former Army chemical weapons specialist and now the managing director of Strongpoint Security, a chemical weapons consultancy based in the U.K.

“1.5 [milliliters] is actually rather a small amount,” Kaszeta said. “Yes, it could kill somebody, but as sarin evaporates very quickly and also degrades very quickly.”

It would not last long if it got out of one of the containment jars, he said.

That amount is small enough that it could be within the margin of error for measuring it, depending on what technique was used, Kaszeta said.

Bruce Anderson, a spokesman for the inspector general’s office, said the investigation recommended a new inventory of all the chemicals at Dugway be completed to establish a new system to better track dangerous substances.

“We found conditions that increased the risk that chemical agent operations are not conducted in a safe, secure and reliable manner,” Anderson said. “We believe that the Army should address the increased risk by quickly implementing corrective actions.”

Dugway is the same facility that was the source of a nationwide scare in 2015 after it was reported the facility had inadvertently shipped hundreds of samples of live anthrax to medical labs in all 50 states and nine other countries when the samples were supposed to be inactive. The top officer at Dugway at the time, then-Col. William King, was issued a career-ending reprimand following the incident.