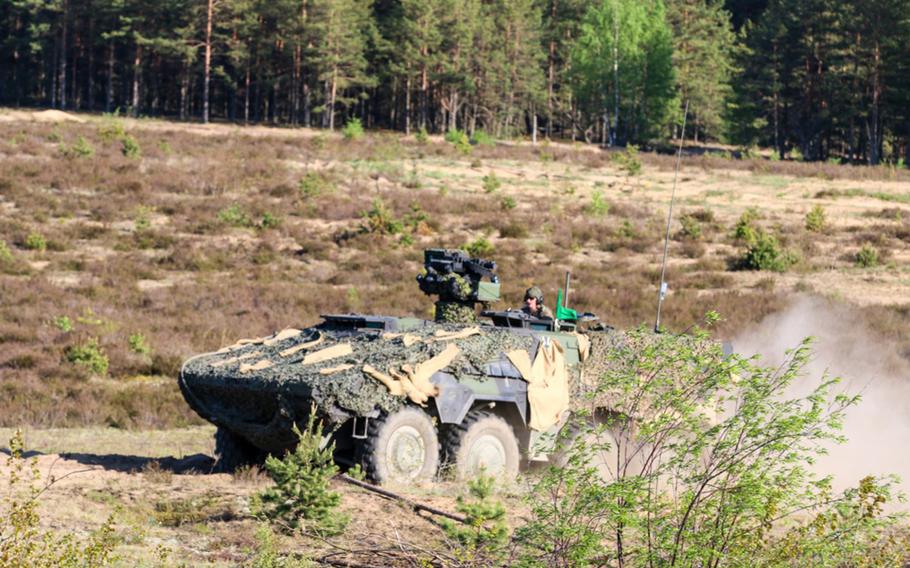 A German Army GTK Boxer Armoured Fighting Vehicle moves to its firing position during Exercise Hunter on May 12, 2016, in Pabrade, Lithuania, on May 12, 2016. German soldiers operating in Lithuania were targeted by a "fake news" attack this week. (Staff Sgt. Michael Behlin/U.S. Army)

German soldiers operating in Lithuania were targeted in a “fake news” attack that accused the troops of raping an underage Lithuanian girl, according to German media reports.

NATO diplomats told the news magazine Der Spiegel that the reports were likely carried out by Russia as part of a campaign to undermine the presence of NATO forces in the Baltics.

Germany is leading a multinational battalion in Lithuania as part of NATO’s effort to increase its presence in the region. Other allies are to lead battalions in Poland, Latvia and Lithuania.

“To our knowledge, Lithuanian police investigations came to the conclusion that there were neither a victim nor possible witnesses nor any perpetrators,” a representative for the German Defense Ministry told public broadcaster Deutsche Welle.

The accusation was reported by some local news outlets before being refuted by Lithuanian authorities.

The German Defense Ministry said the email address accusing the soldiers no longer exists. Authorities continue to investigate and are attempting to track the IP address, according to the reports.

The incident came as concerns grow about the role of misinformation campaigns aimed at eroding public trust in institutions such as NATO.

The U.S. and others in the West have accused Russia of being a main culprit in such information war campaigns, which the Kremlin has repeatedly denied.