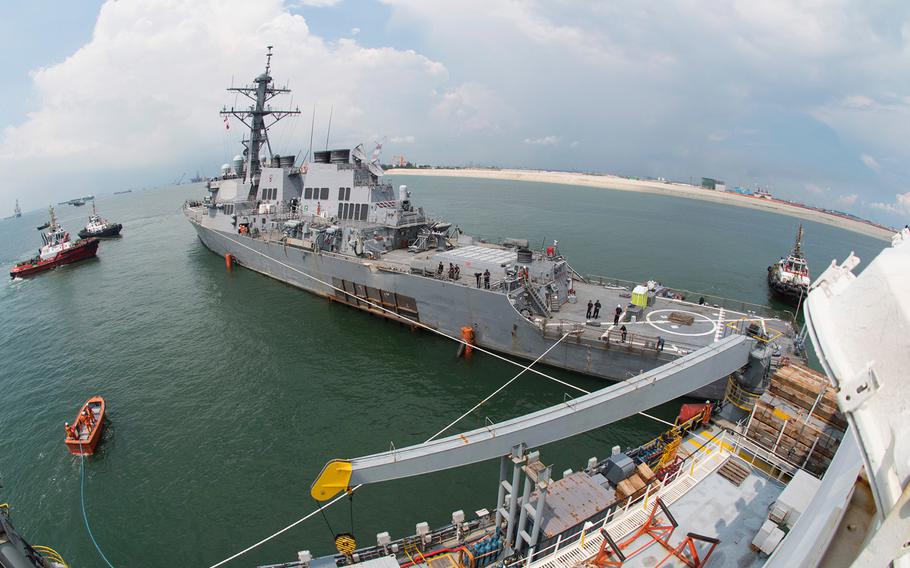 WASHINGTON — A U.S. Navy report released Thursday depicts a Pacific fleet that is unprepared for emergencies, lacking in training and severely overstretched in dealing with threats in the region.

The collisions, the worst of four major accidents in 2017, raised serious questions about basic seamanship and readiness within the Pacific-based 7th Fleet. Eight senior officers, including the commander of the 7th Fleet, have been fired.

“The risks that were taken in the Western Pacific accumulated over time and did so insidiously,” the report said. “The dynamic environment normalized to the point where individuals and groups of individuals could no longer recognize that the processes in place to identify, communicate and assess readiness were no longer working at the ship and headquarters level.”

“We will spend every effort needed to correct these problems and be stronger than before,” Chief of Naval Operations Adm. John Richardson said in a statement Wednesday after Navy accident reports concluded the fatal collisions were “avoidable.”

The surface-fleet review, ordered by Richardson, was overseen by Fleet Forces Command Head Adm. Philip Davidson. During previous testimony to Congress, the Navy has said that regular training among 7th Fleet sailors did not meet standards. Sailors on watch in the Fitzgerald and McCain incidents were unprepared for the emergency situations, according to the report.

The readiness review comes one day after Navy accident reports were released that concluded the fatal collisions were “avoidable.”

The broader review released Thursday said the 7th Fleet was severely overstretched with threats from North Korea and China alongside normal operations putting strains on the fleet that made proper procedure difficult. The Navy role in stopping North Korea from employing its nuclear weapons was particularly a factor, considering that both collisions involved Arleigh Burke-class destroyers with anti-ballistic-missile capabilities. The Navy has been forced to surge several ships to take the place of the Fitzgerald and McCain for regional missile defense.

The report notes that ongoing budget problems have made fulfilling all that is expected of the Navy difficult. It repeated the standard Defense Department call during the past several years for reliable budgets while decrying sequestration and President Barack Obama’s caps on military spending.

“The ability to supply forces to the full demand is, and will remain, limited,” according to the report.

The budget constraints “did have an impact in putting more pressure to meet increasing demand for Japan-based assets” without ships from the U.S., as opposed to ships forward-deployed in Japan with the 7th Fleet.

The report also noted that despite increased demand, the deployed ships tried to take on the additional missions while ignoring training requirements.

“Can-do should never mean must-do, so we must continue to encourage our commanders to accept the risks when the benefit to be gained is worth the potential risk of failure,” according to the report.