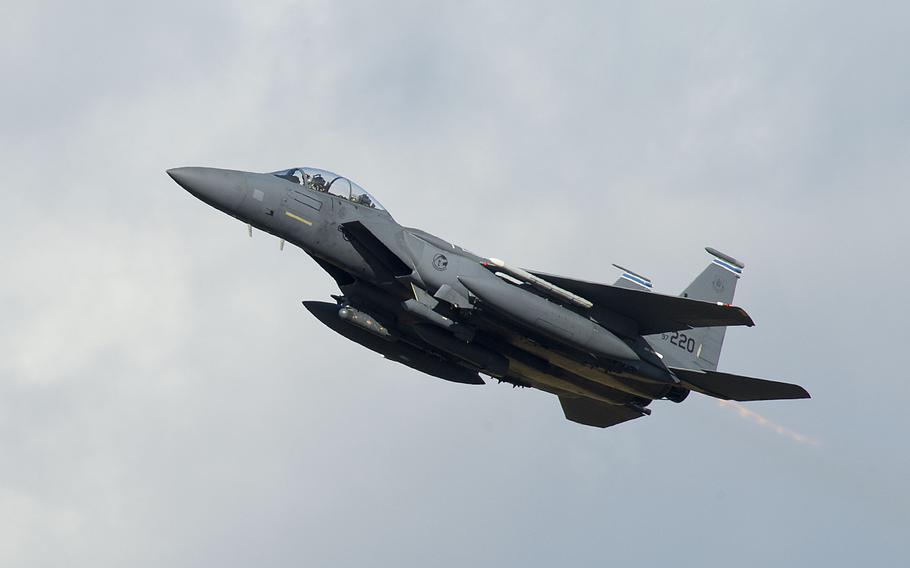 A 48th Fighter Wing F-15E Strike Eagle takes off from RAF Lakenheath, England, in February 2015. The October crash of an F-15D fighter jet was caused by an RAF Lakenheath pilot’s excessive maneuver and an imperfection in the plane’s nose, the Air Force said in a report released Thursday. (Trevor T. McBride/Courtesy U.S. Air Force)

RAF MILDENHALL, England — The October crash of an F-15D fighter jet was caused by an RAF Lakenheath pilot’s excessive maneuver and an imperfection in the plane’s nose, the Air Force said in a report released Thursday.

The crash occurred while the pilot was conducting basic maneuvers over the English county of Lincolnshire. The pilot suffered minor injuries, and no one was injured on the ground.

Col. Russell D. Driggers, president of the accident investigation board, found the 493rd Fighter Squadron pilot performed a series of maneuvers called “vertical jinks” that were designed to bring the jet closer to an opponent. After these jinks, the report says, the pilot attempted an “aft-stick pull” that put the F-15D into “wing rock,” a condition indicating a stall.

The pilot did not recall performing the pull, according to the report.

“This abrupt aft-stick pull constituted an inappropriate response to conditions and over controlled the aircraft,” the report says.

While performing this maneuver, a defect in the plane’s nose generated enough force on the plane to put it into a spin that reached 111 degrees of turning a second.

The pilot attempted recovery maneuvers, but was unsuccessful and eventually ejected.

“I’m out man,” the pilot radioed just before ejecting, according to the report.

The jet was destroyed upon impact and cost an estimated $44.6 million. The crash also damaged a farmer’s field and caused an estimated $600,000 in environmental cleanup costs.

The defect in the plane’s nose was identified in the report as “a large gap” in the nose assembly. The gap required maintenance personnel to use “a larger than normal amount of sealant,” to keep the nose cap in place. Some of the sealant came onto the surface of the plane and disrupted the plane’s aerodynamic features. However, the amount of sealant did not violate Air Force maintenance procedures.

A spokesman for Lakenheath said officials are addressing the sealant issue Air Force-wide as a result of the board’s findings.

Lakenheath has one F-15D remaining at the base, the spokesman said.

The report says the pilot incorrectly followed anti-spin procedures, but this did not contribute to the crash, as data indicate the plane was “unlikely to recover” before the prescribed ejection altitude. The report, however, also says there was not enough data to precisely analyze the pilot’s recovery efforts.

A U.S. Air Forces in Europe spokeswoman could not immediately comment on any actions being taken regarding the pilot as a result of the board’s findings.