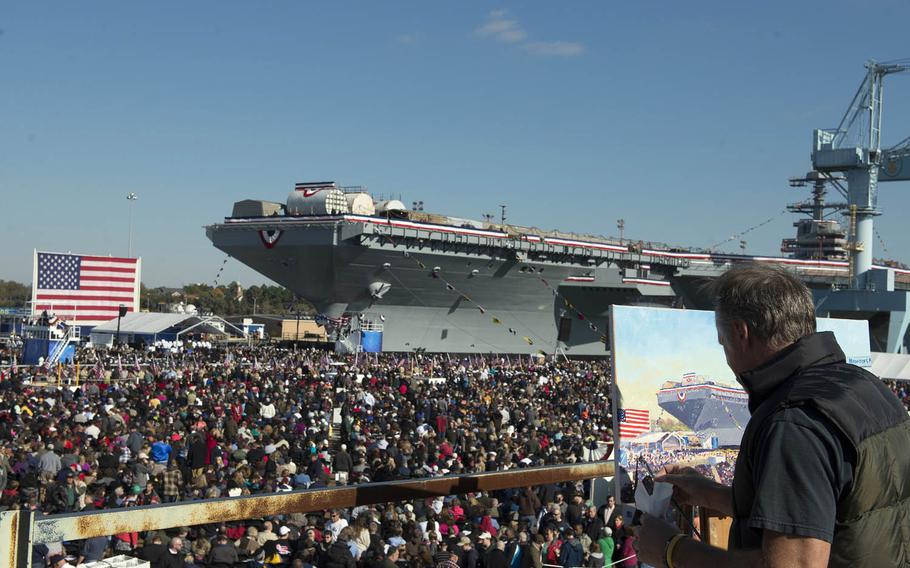 Artist Brian Murphy paints the aircraft carrier USS Gerald R. Ford on the day of its christening, Nov. 9, 2013, at the Huntington Ingalls Industries Newport News Shipyard in Virginia. The U.S. Navy will need to spend between $4 billion and $7 billion more on shipbuilding each year to sustain current presence levels into the future, according to a report released Wednesday, Nov. 18, 2015, by the Center of Strategic and Budgetary Assessments, a Washington, D.C.,-based think tank. (Aidan Campbell/U.S. Navy)

The Navy will need to spend $4 billion to $7 billion more on shipbuilding each year to sustain current presence levels into the future, according to a report released Wednesday by a Washington, D.C.,-based think tank.

Years of underfunding and increased demand have already eroded the ability of the Navy and Marines to respond to crises and maintain a presence in the world’s hotspots, says a Center of Strategic and Budgetary Assessments report. The report was sponsored in part by the Navy League, whose stated purpose is to educate and motivate the American people to support U.S. martime capabilities.

While the number of ships deployed overseas between 1998 and 2014 remained consistent at about 100 vessels, the full fleet shrank by about 20 percent, the report said, meaning ships, sailors and Marines have faced longer deployments, and vessels have had to skip maintenance to preserve the Navy’s overseas presence.

Some Republican presidential candidates have brought up these declining numbers, often citing a statistic that the Navy has fewer vessels now than 100 years ago. Secretary of the Navy Ray Mabus has called comparing modern ships’ capabilities with their archaic predecessors as pointless, “like comparing the telegraph to the smartphone.”

However, today’s ships are working longer and harder.

Between 2001 and 2009, the amount of time Navy ships spent at sea — known as operating tempo — increased by 8 percent, and the tempo for surface combatant ships jumped by 18 percent, the report said. The number of ships at sea peaked at 86 percent in 2009, but remains high at 74 percent for 2015, the report said.

The Navy has experienced additional stresses in recent years. Plans by the Obama administration to refocus the Navy in Asia as part of the “Pacific pivot” have been hampered as America’s attention has been diverted to the resurgence of jihadist fighters in Iraq and a conflict between Russia and Ukraine that’s had NATO on alert. And the Navy, along with the other services, has scrambled to make do with less in the wake of sequestration spending limits.

Extended operating tempos and work at Navy shipyards interrupted by sequestration have left a backlog of maintenance for nuclear aircraft carriers.

“The backlog culminated in late 2015 with a Persian Gulf “carrier gap” between the departure of the USS Theodore Roosevelt and the arrival of the USS Harry S. Truman,” the report said. “A second carrier gap will occur in the Pacific in 2016, and gaps will reoccur intermittently in both theaters until 2021, when the USS Gerald R. Ford becomes operationally available.”

The current “heel-to-toe” deployment schedule also affects the Navy’s so-called “surge capacity,” the report said. The Navy and Marine Corps usually can forward deploy three carrier strike groups and three amphibious ready groups simultaneously within 60 days of a crisis, the report said. But with the crowded maintenance schedule and less spending on readiness, “the Navy and Marine Corps are now only able to surge one [carrier strike group] and one [amphibious ready group],” the report said.

The report concluded that the Department of Defense has three main options to relieve strain on the Navy: Reduce the Navy’s presence in trouble spots around the world, build more combat ships or get more funding from Congress to maintain the current tempo of operations.

“More shipbuilding is the most enduring way to increase the ability of the fleet to promote forward presence,” Bryan Clark, one of the report’s authors, wrote in an essay published online Wednesday.

But his essay in The National Interest magazine also notes that even the Navy’s current shipbuilding plan will fall short of sustaining today’s presence level.

“That shipbuilding plan requires about $5 billion more per year than the Navy has historically received,” Clark wrote. “Shipbuilding plans that stay within historical fiscal constraints are even less able to sustain today’s overseas naval presence.”

In his essay, Clark offered a fourth alterative where the Navy would create “menu options” from which combatant commanders could choose the exact force structure desired, rather than choosing only between carrier strike groups and amphibious ready groups.

“Without a significant investment by Congress and the administration in the Navy’s future, we are placing our national defense, our leadership in the world, and the strength of our economy and health of the global economy at great risk,” Sinclair Harris, a retired admiral and former vice director for operations on the Joint Chiefs of Staff, said in a statement issued by the Navy League.