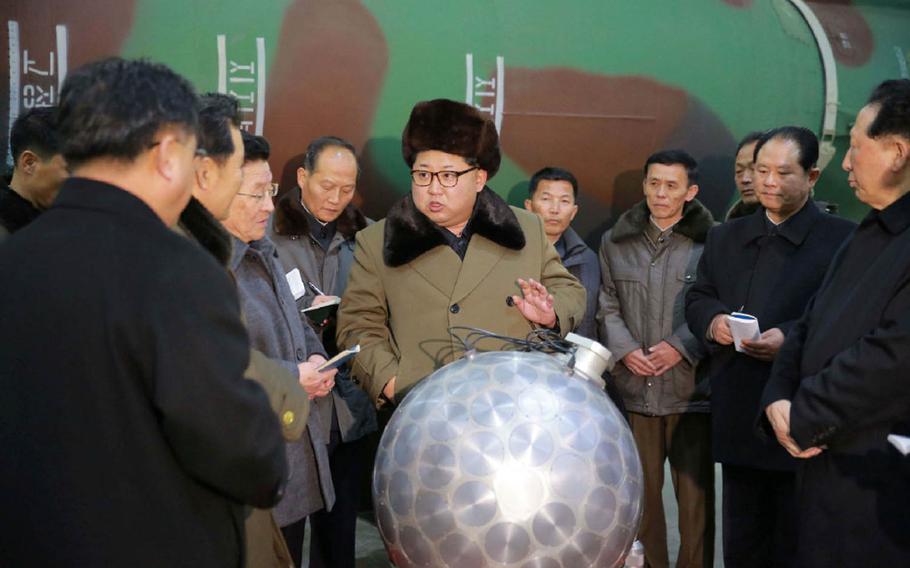 North Korean leader Kim Jong Un poses with what some experts say is a possible nuclear warhead mockup in this undated photo released by the Korean Central News Agency on March 9, 2016. (Courtesy of KCNA)

SEOUL, South Korea — North Korea may have as many as 21 nuclear weapons and is “significantly increasing” its capabilities, a Washington-based think tank says.

The findings show progress despite a series of recent failed missile tests that suggest the North is unable to fire the warheads successfully.

The Institute for Science and International Security estimated North Korea had 10 to 16 nuclear weapons at the end of 2014 and has added four to six nuclear weapons to its arsenal over the past 18 months.

Tuesday’s report came a week after the U.N.’s nuclear watchdog, the International Atomic Energy Agency, said North Korea appears to have reactivated a plant to reprocess spent fuel to produce plutonium, the core material for a nuclear bomb, at the country’s main nuclear facility.

The Yongbyon reactor was closed in 2007 under an aid-for-disarmament deal during six-party talks with the U.S. and other world powers. Those negotiations collapsed, and North Korea said last year the facility was operational again.

The institute said it has independently confirmed activities inside the main building at the radiochemical laboratory.

Commercial satellite images from June 8 did not show direct signs but noted “indirect signatures associated with plutonium-separation” in the facility, it said, pointing to the removal of tanks and signs that a coal-fired steam generation plant may have been active.

It based the estimated number of additional nuclear weapons on an analysis of North Korea’s production of separated plutonium and weapons-grade uranium at Yongbyon. The report said it did not take into account the possible production of more highly enriched uranium at a second centrifuge plant.

“Nonetheless, this estimate, despite not being comprehensive, shows that North Korea appears to be significantly increasing its nuclear weapons capabilities,” said the report by David Albright and Serena Kelleher-Vergantini.

The isolated country also has staged a series of missile tests in recent months, including firing one nearly 20 miles from a submarine. Four efforts to launch a mid-range missile believed capable of reaching U.S. installations in the Pacific have failed, but the efforts still raised fears the country is making progress on that front as well.

President Barack Obama has said his administration is taking the threat seriously.

“And although, more often than not, they fail in many of these tests, they gain knowledge each time they engage in these tests,” he said in April.

An arms watchdog also said Monday that North Korea is believed to have enough fissile material for about 10 nuclear warheads, but it is unclear whether the country has produced or deployed operational weapons.

“North Korea claims to have designed and built a nuclear warhead that is sufficiently compact and robust for delivery by a ballistic missile,” the Stockholm International Peace Research Institute said in its annual report released Monday. “However, there is no open-source evidence to indicate whether it has actually done so.”