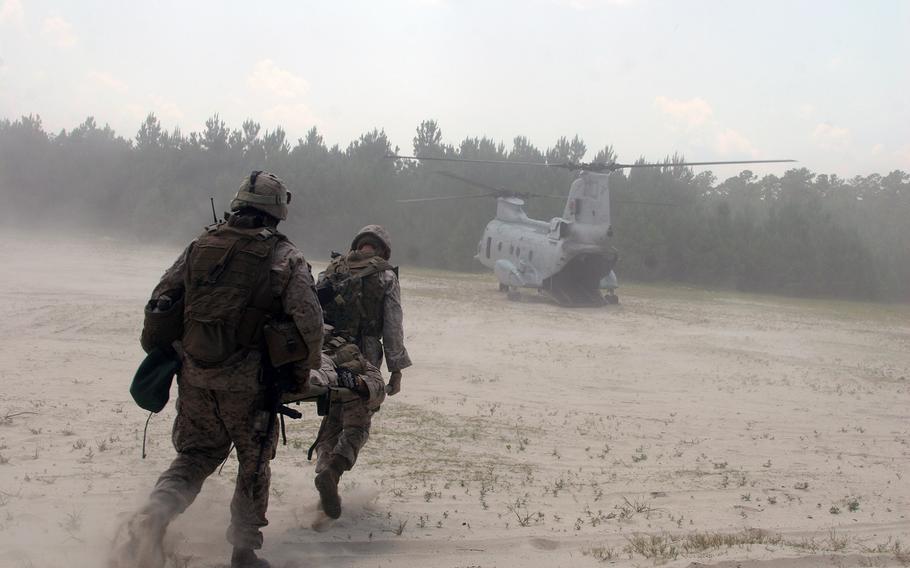 A U.S. sailor and Marine evacuate a casualty on June 23, 2010, during a Special-Purpose Marine Air-Ground Task Force rehearsal exercise at Marine Corps Base Camp Lejeune. (Samuel A. Nasso/U.S. Marine Corps)

The Marine Corps will create a new land-based unit in the Middle East during fiscal 2015, designed to respond to crises in the region, including emergencies at embassies, the Marine Corps Times reported Thursday.

About 1,900 Marines and sailors will form Special-Purpose Marine Air-Ground Task Force Central Command during fiscal 2015. The unit will be land-based, similar to the Spain-based SPMAGTF Crisis Response, but the exact location — or locations — where the Marines will be based is still being determined, Lt. Col. Joe Kloppel, a spokesman with Marine Corps Forces Central Command, told the Times. The Marine Corps stood up a command element in Bahrain in 2011, which is built around about 150 headquarters staff personnel, the Times noted.

“The [Marine Corps] intends to source and deploy SPMAGTF-CENT, which consists of a command element, ground combat element, aviation combat element and logistics combat element providing CENTCOM with a flexible, self-deploying and self-sustaining option for responding to these emergent threats,” Kloppel said.

The unit will be equipped with several fixed-wing and tiltrotor aircraft, a potent combination that creates “an extremely agile crisis response force,” he said. That will, at various times, include attack aircraft like AV-8B Harriers and F/A-18 Hornets, as well as support aircraft like the MV-22 Osprey and KC-130J Super Hercules, he told the Times.

These assets provide the unit with the flexibility to conduct military-to-military engagements and security cooperation in the Middle East with partner nations, as well as expand to meet bigger requirements, Kloppel said.