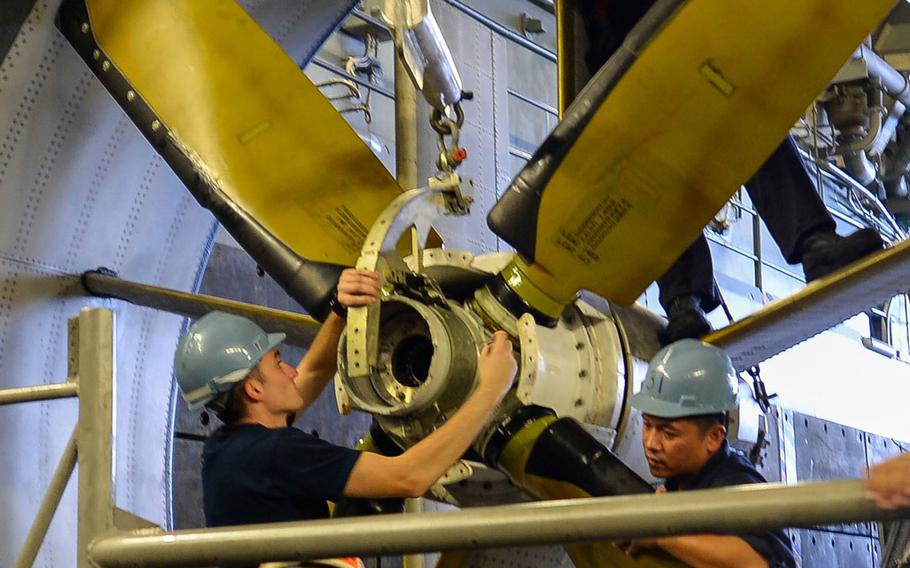 Sailors replace a propeller on the starboard side of an amphibious Landing Craft Air Cushion in the well deck of the USS San Diego while at sea in September 2014. (Stacy M. Atkins Ricks/U.S. Navy)

Reports of degraded or out-of-service equipment on U.S. Navy ships have doubled over the past five years, with the condition of many overseas-homeported ships deteriorating faster than those based in the U.S.

Maintenance for some overseas ships has been repeatedly delayed, leading to degraded conditions, according to a report released Friday by the Government Accountability Office. Making matters worse, the Navy has not come up with a long-term plan to deal with needed maintenance, even as it has come to rely more on homeporting vessels overseas.

“With combatant commanders’ demand for forward presence at historically high levels and growing, the Navy has chosen to make several near-term decisions, including extending deployments and assigning more surface and amphibious ships to overseas homeports, to meet presence demands with its existing force structure,” the report said.

If the Navy does not develop an operational schedule that balances demands and long-term sustainability for ships homeported overseas, it risks incurring higher operations, support, and infrastructure costs, and potentially exacerbating strains on its fleet and shipbuilding budget over the long term, according to the report.

Demand has grown by combatant commanders for forward presence in responding to crises, deterring adversaries, building trust, creating allies and building partner capacity — but there’s not enough Navy to go around for it all. The GAO report said the Navy reported meeting about 44 percent of the requests from combatant commanders around the world for Navy support last year. The Navy said it would have needed another 150 ships to fully meet all those requests.

During the past decade, the Navy has roughly doubled its number of overseas-ported vessels, from 20 in 2006 to an expected 40 by October this year, which would represent about 14 percent of the Navy’s fleet, the report said. Twenty-one of those vessels are homeported in Japan, with an additional destroyer expected to homeport at Yokosuka by 2017.

Even without full maintenance, vessels based overseas cost more to operate --the GAO calculated that the cost of operating a surface or amphibious ship overseas for one year was 15 percent higher than similar ships based in the U.S.

Overseas-homeported vessels are maintained differently than those stateside, the report said.

“Maintenance officials told us that the focus for ships homeported overseas is on mission readiness, so overseas-homeported ships place priority on the maintenance of combat systems, for example, while systems with the potential to reduce ship service life — such as fuel and ballast tanks that require extended in-port periods to properly maintain — are subject to maintenance deferrals in order to allow the ship to sustain a high operational tempo,” the report said.

For example, after the amphibious assault ship USS Essex returned from 12 years of homeporting in Japan in 2012, the ship “required the costliest depot maintenance work in surface Navy history,” the report said.

Pacific Fleet and Fleet Forces Command officials told the GAO that no decision has been made about how or whether such a “sustainable” maintenance schedule will be used for overseas-homeported ships.

If the Navy does not assess the long-term risks of overseas-homeporting when making future force-structure decisions, “it risks returning to a more costly and less sustainable operational schedule as it adjusts its presence overseas,” the report said.