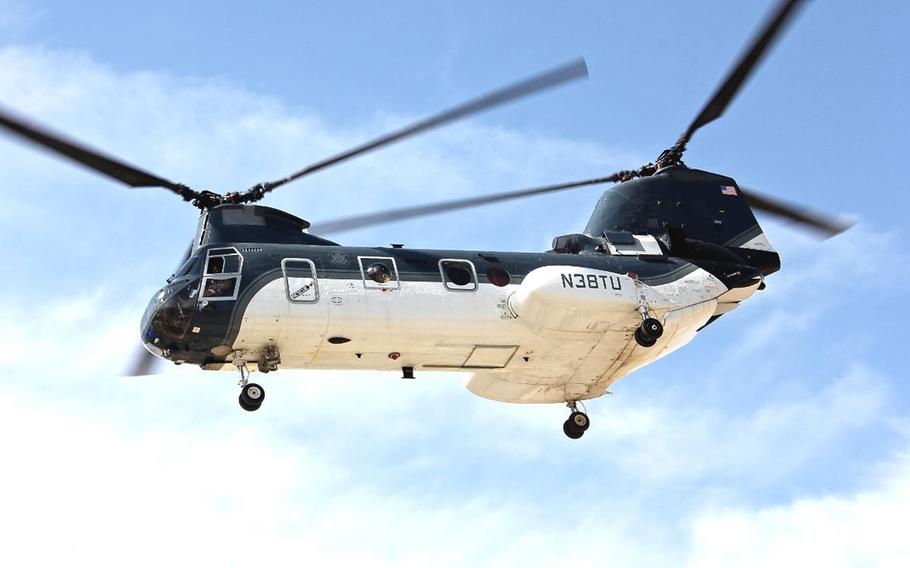 An Embassy Air CH-46 helicopter operates in Afghanistan. The airline established to support the U.S. embassies in Afghanistan and Iraq has begun charging such high fees that it is harming some embassy operations, according to a report released Sept. 24, 2019, by the State Department Inspector General. (U.S. Army)

KABUL, Afghanistan — An airline set up to support U.S. embassies in Afghanistan and Iraq has begun charging such high fares that it is hampering some diplomatic operations, according to a report released Tuesday by the State Department Inspector General.

A 7-minute helicopter trip with Embassy Air in Afghanistan costs nearly $1,500, while a 1-hour plane journey in Iraq is priced at nearly $4,800, the report said.

Tenuous security means embassy staff almost always have to travel within each country by air rather than road, and some bureaus have been unable to afford the prices on Embassy Air, said the report.

The Embassy Air program was established in 2009 to support the diplomatic missions in Kabul and Baghdad.

High ticket prices have forced some offices to use other means of transportation, such as military or commercial airlines, and have forced officials to cancel visits to government project sites, the IG found in an audit of the airline, which maintains fleets of several planes and about two dozen helicopters in the two countries.

The $1,500 ticket price for a 7-minute helicopter trip from the U.S. Embassy in Kabul to nearby Camp Alvarado near the airport represents a nearly 400% increase from the price four years ago, the audit found.

A 1-hour flight from the Baghdad Diplomatic Support Center to the southern Iraq city of Basra, where the U.S. has a consulate, is priced at nearly $4,800, a 770% increase, it said.

The increases stem from a move by the board that oversees funding of the Embassy Air program to cover a larger share of operational costs through ticket sales instead of congressionally appropriated funds.

But, as ticket prices rose, ridership fell, and the IG audit found that officials did not routinely adjust the frequency of flights or the number of aircraft to align with changing demand.

For fiscal year 2019, the total cost of Embassy Air services was more than $320 million.

The IG called on the body that oversees the program’s funds to implement policies to review and adjust ticket fees. It also recommended the board set up a procedure to review Embassy Air services and cost effectiveness in both Afghanistan and Iraq.