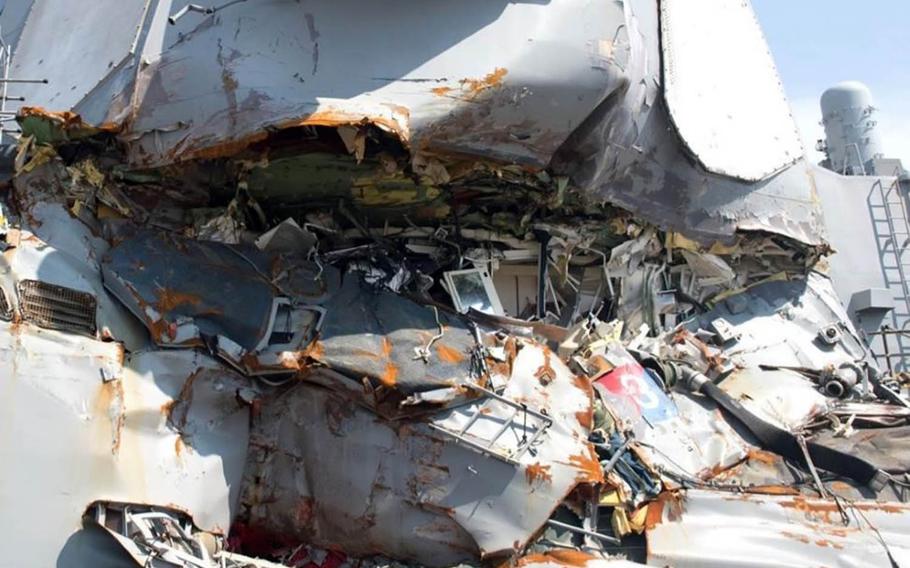 This screenshot of a photo taken from a Navy report shows the USS Fitzgerald's commmanding officer's stateroom after the June 17, 2017, collision near Japan. (Courtesy of the U.S. Navy)

This screenshot of a photo taken from a Navy report shows the USS Fitzgerald's commmanding officer's stateroom after the June 17, 2017, collision near Japan. (Courtesy of the U.S. Navy) This screenshot of a photo from a Navy investigative report shows a lounge in Berthing 2 after floodwaters were drained from the USS Fitzgerald. (Courtesy of the U.S. Navy) 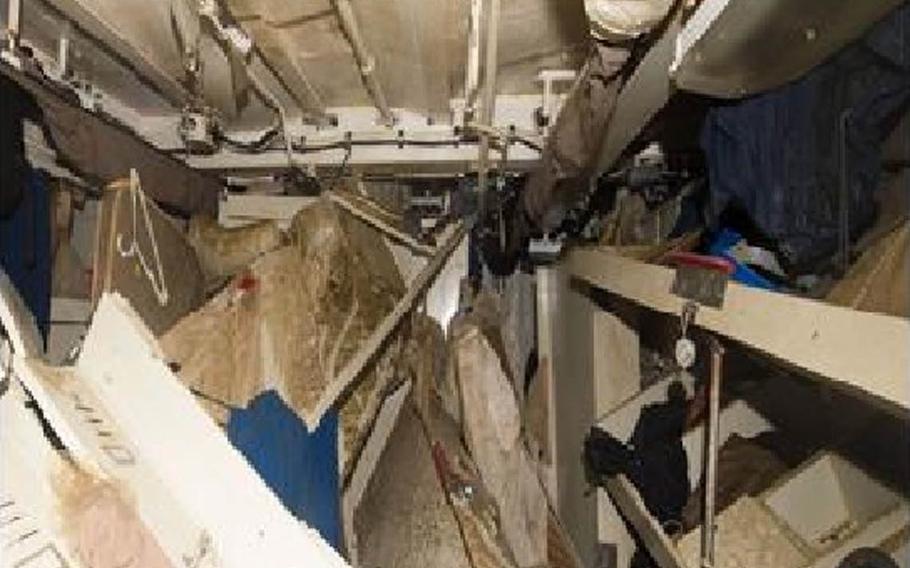 This screenshot taken from a Navy investigative report shows racks in Berthing 2 after the USS Fitzgerald was drained of floodwaters. (Courtesy of the U.S. Navy)

YOKOSUKA NAVAL BASE, Japan — An initial report into the USS Fitzgerald collision released by the Navy Thursday details the terror sailors experienced in the moments after the collision along with the heroic efforts crew members undertook to save lives.

The accident happened about 1:30 a.m. when the destroyer was struck by the ACX Crystal, a Philippine-flagged merchant ship, said the report by investigating officer Rear Adm. C.F. Williams. The Fitzgerald was hit on its starboard side above the waterline, severely damaging the commanding officer’s cabin. The merchant ship’s bulbous bow battered the starboard access trunk, a space that opens into the ship’s Berthing 2 area, which has space for 42 crew members. Thirty-five sailors were there at the time of the collision.

The Crystal tore an approximately 13-by-17 foot hole into the Fitzgerald, the report said. The door between Berthing 2 and a starboard access trunk pulled away from the ceiling and bent to a 90-degree angle. “As a result, nothing separated Berthing 2 from the onrushing sea, allowing a great volume of water to enter Berthing 2 very quickly,” Williams wrote in the report.

Within 30 to 60 seconds, the space was almost entirely flooded, he added.

Berthing 2 had three escape routes, two of which were on the portside of the ship — a ladder and an escape scuttle. The third, a ladder on the starboard side near the point of impact, was rendered nearly inaccessible because of flooding and debris, the report said.

At the moment of impact, some sailors described hearing “a loud noise,” Williams wrote. Others felt an “unusual” movement of the ship and some crewmembers were thrown from their racks.

“Still other Berthing 2 sailors did not realize what had happened. Some of them remained asleep,” wrote Williams, who added one sailor “saw another knocked out of his rack by water.”

The crew members of Berthing 2 spurred into action after they found themselves in a “rapidly flooding space,” the report said, with sailors yelling “Water on deck!” and “Get out!”

Sailors woke up fellow crew members, and senior sailors checked beds to account for their shipmates, it said. Sailors calmly formed lines to climb the ladder out of the berthing area, even though the water was soon waist deep and then neck deep. Debris, including mattresses, furniture and wall lockers floated through the area, impeding the evacuation.

During the evacuation, an unnamed sailor reported that Fire Controlman 1st Class Gary Leo Rehm Jr. pushed him out from under a falling locker. Rehm, 37, of Elyria, Ohio, was one of the seven who perished in the accident.

Two sailors who stayed at the bottom of the ladder to assist evacuees “likely saved the lives of at least two of their shipmates,” Williams said in the report. “They did what is expected of sailors in such a situation.”

The report said the two sailors overseeing evacuations at the ladder waited until the water level was neck deep before climbing out of the berthing area. From the top of the ladder, the sailors continued looking for survivors and, reaching into the dark water, were able to rescue two crewmembers who were completely submerged.

The last sailor pulled from the area was in the bathroom at the time of the accident when a “flood of water knocked him to the floor,” the report said. He moved toward the main berthing area and later found himself pinned between the lockers and ceiling of Berthing 2. After grabbing a pipe in the ceiling and pulling himself free, he managed to swim his way to the only light available, which was coming from the ladder area the sailors had used to evacuate.

While the other evacuees left Berthing 2 from the portside ladder, a sailor who had a bed on a top rack near the starboard access trunk attempted escape from the starboard side ladder well, the report said. He initially tried to leave his rack but accidentally kicked another sailor, so he then decided to wait until everyone else was out of the berthing area. He then jumped from his rack, landing in chest-deep water. The sailor tried to make his way to the escape route, fighting against the water. He heard someone yell “go, go, go it’s blocked” but was already underwater, with his escape impeded by furniture debris clogging the escape route.

The sailor said he took some breaths in a small air pocket and began to swim to the exit, according to the report. The sailor said he at one point lost consciousness due to lack of oxygen and doesn’t remember how he escaped Berthing 2. He managed to make his way to Berthing 1, which was also flooding. There he caught his breath and made it to the main deck before collapsing.

That sailor was later evacuated by helicopter to the Yokosuka Naval Base Hospital. The report said he is the only one to escape through the starboard exit route.

Sailors who escaped Berthing 2 immediately began to assist with disaster-response efforts, the report said. They took on a variety of roles, from assisting damage-control efforts to treating injuries and handing out food and water. One evacuee stood watch for 15 hours in aft steering after power was lost.

Of the 35 sailors in Berthing 2 at the time of the collision, 28 escaped and seven perished, the report said. The seven sailors’ beds were in rows three and four, which were closest to the starboard escape route and directly in the path of water rushing into the ship.

Williams said in the report that the flooding of Berthing 2 was unavoidable, but that the actions of the sailors prevented the tragedy from being worse.

“The sailors assigned to Berthing 2 should be commended for their response to the dangerous and deadly threat they faced,” Williams wrote. “They fought hard in the dark of night to save their ship. Through their swift and in many cases, heroic actions, members of the Fitzgerald crew saved lives.”