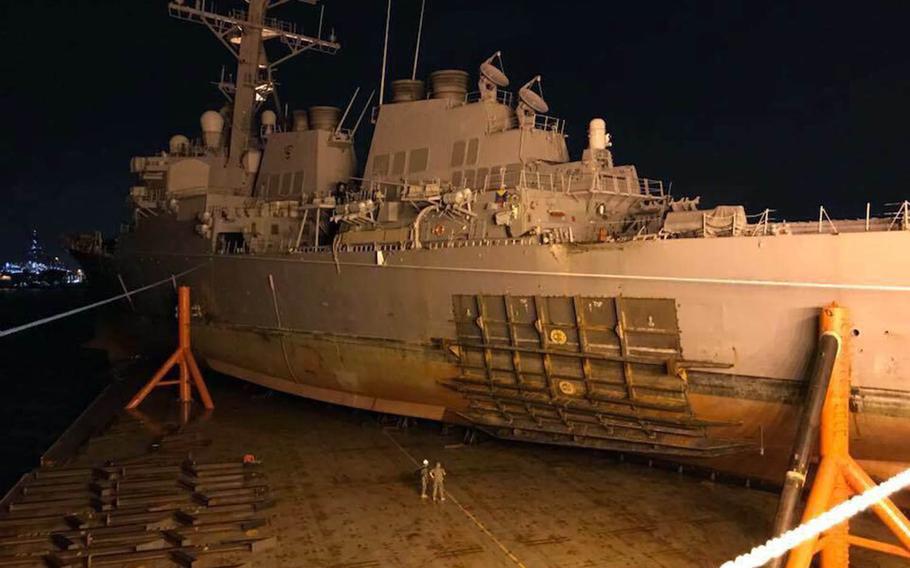 YOKOSUKA NAVAL BASE, Japan — A Navy report details death, destruction and heroism on the USS John S. McCain after an Aug. 21 collision with an oil tanker killed 10 sailors near Singapore.

The guided-missile destroyer was in “darkened ship” status when it was struck on its port side at around 5.24 a.m. The tanker’s bow tore a 28-foot hole above and below the waterline on the McCain, according to the report released on Wednesday.

The warship’s crew had no warning of the crash, which jolted watch standers from their stations and threw sailors off their feet. Initially there was confusion with some crew thinking they had run aground or were under attack, the report said.

The accident caused flooding, leaking fuel and loss of ventilation and communications. A 15-foot-wide berthing area, occupied by 12 sailors, that took the brunt of the collision, was compressed five feet wide and it took less than a minute for water to flood the area, which was below the waterline, the report said.

Only two sailors escaped from the area. One was thrown off a ladder by the crash but was able to clamber to safety. Another struggled in chest-deep water through a debris-clogged passageway with only emergency lighting to guide him. Rising water passed over the sailor’s head, and he swam to an exit using pipes to guide him toward the light.

The sailor, pulled from the water by a comrade, was “bruised and covered with chemical burns” from fuel-contaminated water, the report said.

In another berthing area, sailors escaped with minor injuries. The ship’s executive officer and other sailors rescued several people trapped there by debris. One sailor, pinned in his bed, was rescued from rising waters. Others, trapped in beds, were freed by rescuers who took as long as an hour to cut through debris, the report said.

The crew’s “resiliency and successful damage control and engineering repair efforts” allowed the McCain to limp along under its own power toward Singapore’s Changi Naval Base. Forty-eight sailors were injured in the collision and five were treated at a hospital on shore, the report said.

The Navy announced Aug. 28 it had recovered the bodies of all 10 deceased sailors.

It would later label the collision “preventable” and in early October relieved the ship’s commanding officer, Cmdr. Alfredo Sanchez, and executive officer, Cmdr. Jessie Sanchez, due to a loss of confidence in their ability to lead. A Navy statement said Alfredo Sanchez displayed “poor judgement” while Jessie Sanchez “exercised poor leadership of the ship’s training program.”