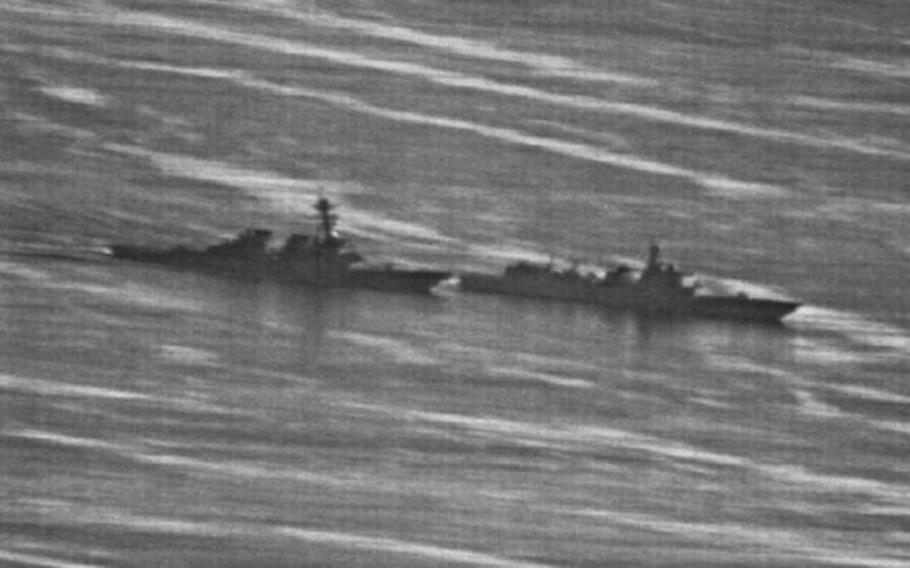 This Navy image obtained by naval website gCaptain.com shows a confrontation between the USS Decatur, left, and a Chinese destroyer in the South China Sea, Sunday, Sept. 30, 2018. (U.S. Navy photo)

A Chinese military expert has suggested the People’s Liberation Navy should “ram” the next U.S. warship to sail through waters claimed by China, according to a report by the state-run newspaper Global Times.

According to the newspaper, Dai Xu, president of China’s Institute of Marine Safety and Cooperation, on Saturday said: “If the US warships break into Chinese waters again, I suggest that two warships should be sent: one to stop it, and another one to ram it.”

Dai spoke at a conference held by the Global Times in Beijing, where officials and experts addressed “key topics of 2018 and their predications for 2019,” according to the article.

The U.S. regularly sends vessels on freedom-of-navigation missions through regions in the South and East China seas claimed by China but recognized by most legal experts under the United Nations Convention on the Law of the Sea as international waters.

Dai’s suggestion follows two publicized U.S. patrols into contested waters. The first resulted in a near-miss confrontation in September with a Chinese warship close to the Spratly Islands in the South China Sea.

During that incident Sept. 30, the Chinese vessel made what Navy officials called an “unsafe and unprofessional” move by sailing within 45 yards of the USS Decatur, which was conducting a freedom-of-navigation operation. The Decatur veered away to avoid a collision.

On Nov. 26, the guided-missile cruiser USS Chancellorsville sailed around the Paracel Islands, also in the South China Sea and claimed by China, according to officials of the U.S. Pacific Fleet. The Navy reported nothing untoward occurred on that patrol.

The Chancellorsville — as one of the USS Ronald Reagan carrier strike group — the week prior to the patrol had made a port call in Hong Kong, where the USS Wasp was denied a visit in October. China denied the Wasp entry after the two countries in September imposed another round of tariffs on each other’s imports.

The South China Sea is a hotspot for trade. The Center for Strategic and International Studies’ China Power estimating that about $3.6 trillion in goods passed through the region in 2016.

In addition to the tariffs, the U.S. sanctioned China for its purchase last year of fighter jets and a surface-to-air missile system this year from Russia. Afterward, China objected to a U.S. plan to sell military equipment to Taiwan, which China considers a breakaway province, according to The Asahi Shimbun on Sept. 27.

Global Times said in its article that Dai considered freedom-of-navigation operations to be “provocation against China.”

“In our territorial waters, we won’t allow U.S. warships to create disturbance,” Dai said, according to the newspaper.