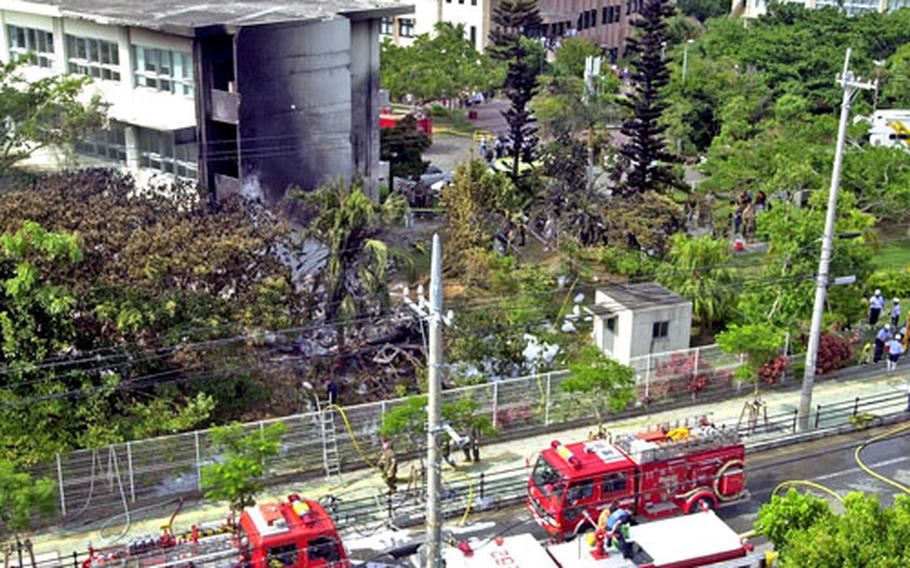 U.S. military officials turned over a report on the cause of a Marine Corps CH-53D helicopter accident to Japanese authorities Tuesday, pinning blame for the Aug. 13 crash on maintenance personnel.

The exchange took place during a second meeting of the U.S.-Japan Joint Committee&#8217;s Unusual Occurrences Subcommittee at the New Sanno Hotel in Tokyo, according to a statement released by both sides. The panel has been looking into the crash, which took place on a university complex in Ginowan City, Okinawa, adjacent to Futenma Marine Corps Air Station.

Col. Victor Warzinski, a U.S. Forces Japan spokesman, declined to speculate on the possibility of criminal charges or whether the U.S. maintenance personnel implicated in the report would face disciplinary action. He said that determination would be made by Brig. Gen. Duane D. Thiessen, the case&#8217;s convening authority and commander of the 1st Marine Aircraft Wing on Okinawa.

The joint news release indicated that &#8220;appropriate disciplinary or administrative action will be imposed on those Marines determined responsible for failing to follow maintenance procedures.&#8221;

Col. Paul Vosti, the director of plans and policy at USFJ, served as chairman of the U.S. delegation at Tuesday&#8217;s meeting, also attended by USFJ staff and service component members and U.S. Embassy representatives.

Thiessen presented the investigation&#8217;s findings and recommendations to the Japanese contingent, which included representatives from the Ministry of Foreign Affairs, Japan Defense Agency, National Police Agency, Ministry of Justice and Ministry of Land, Infrastructure and Transportation.

&#8220;The basic cause of the crash was that a cotter pin was improperly installed in a connecting bolt on a subassembly of the helicopter&#8217;s tail rotor,&#8221; Warzinski said. &#8220;The bolt fell out during the flight, and the pilots lost control of the rotor. Because of that, they had to land the helicopter fairly quickly.&#8221;

Maintenance personnel failed to comply with standard installation procedures, according to the joint statement, and that led to the crash. Those errors were unique to that CH-53D helicopter, and investigators found no evidence of any other structural defects.

Immediately after the accident, all CH-53D helicopters in Japan were grounded for safety and maintenance inspections. Those reviews revealed that the other aircraft were safe to fly.

U.S. officials told the Japanese government that improved maintenance procedures have been initiated in an effort to prevent another accident, according to the news release. Additional preflight checks of critical parts now will be required, and work-hour guidelines for maintenance personnel are being revised.

USFJ is &#8220;committed to implementing those changes in safety measures and maintenance procedures that are necessary in order to ensure that all of its operations are conducted safely,&#8221; the release stated.

No date for the subpanel&#8217;s next meeting has been announced, but both sides agreed to examine the accident report and propose recommendations to the Joint Committee.