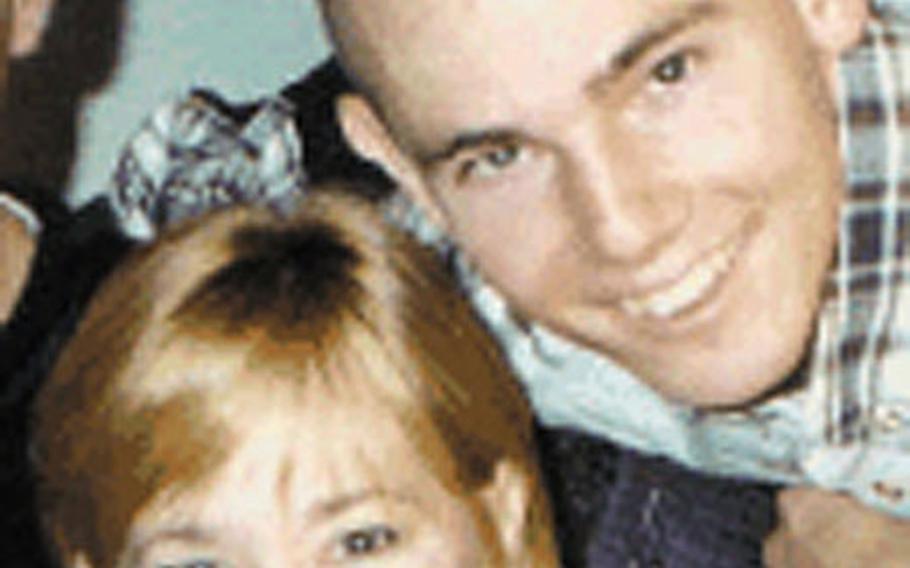 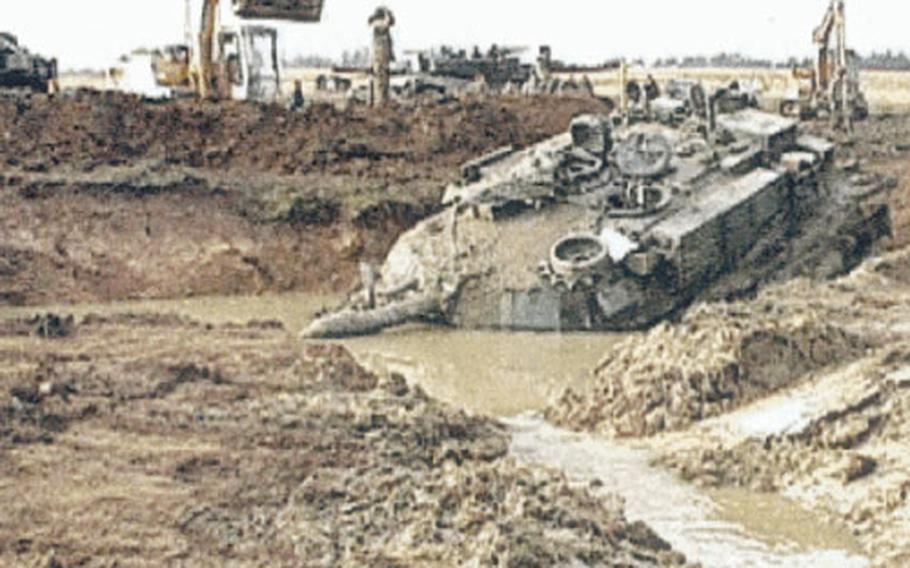 A later photo from the Army&#39;s investigation shows ditches rescuers dug to try to lower the water level around Bandit 66. (Courtesy of Stacie Storrie) 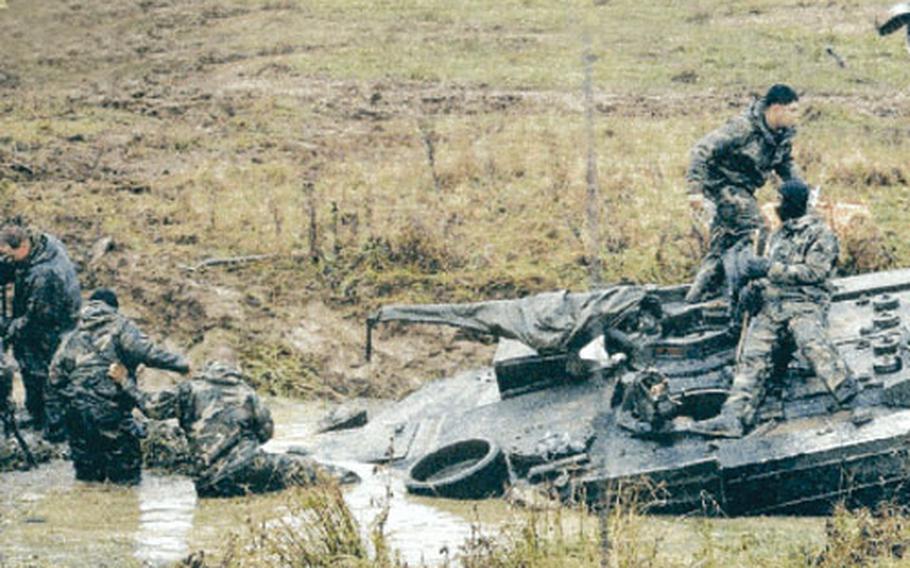 Photos from the Army&#39;s investigation show Stehle&#39;s tank, Bandit 66, nearly submerged in water. Stehle&#39;s driver&#39;s compartment, on the tank&#39;s right side, is below water level in this image. (Courtesy of Stacie Storrie)

Those are the main findings of an Army investigation into Stehle&#8217;s death Nov. 8 during an exercise at the Grafenw&#246;hr Training Area.

The tank gunner, assigned to the 1st Armored Division&#8217;s B&#252;dingen-based Troop B, 1st Squadron, 1st Cavalry Regiment, drowned &#8212; contributed to by hypothermia &#8212; after the Abrams M1A1 tank he was driving slid into a large, water-filled hole, according to the investigation.

&#8220;It is more probable, and very likely if not definite,&#8221; the hole was a fighting position dug by another unit during a previous training exercise, wrote investigating officer Maj. Wayne C. Cherry in his accident report.

Rather than reporting the hole, soldiers filled it with trash, concertina wire and pickets, according to testimony in the recently released accident investigation.

None of this was visible the morning of the accident.

The hole &#8220;looked like a little puddle, just a regular little puddle that looked like the rest of the puddles in the area,&#8221; testified Staff Sgt. Aaron Johnson, who was tank commander that day.

Once the tank was in the hole, emergency crews lacked sufficient rescue equipment to deal with the situation.

Rescuers were thwarted by pumps that could not remove water fast enough to keep it from submerging Stehle, trapped in his driver&#8217;s compartment.

Vilseck and Grafenw&#246;hr fire departments tried to pump water out.

Near-freezing temperatures induced hypothermia, which rendered Stehle unable to breathe through an air hose as the cold water rose above his head, according to testimony.

Two M-88 recovery vehicles with a combined pulling force of 135 tons failed to pull Stehle&#8217;s tank out of the hole.

&#8220;This shows both the significance of the force with which the tank was mired, and the fact that the M-88 recovery vehicle, designed and built to support the much lighter M-60 series tank, is substandard equipment for the present 68-ton M1A1 main battle tank,&#8221; a 1-1 Cavalry officer testified in the report.

If a more powerful Hercules version of the M-88 would have been at Grafenw&#246;hr, &#8220;there is little doubt that the outcome of this situation would have been much different,&#8221; the officer said.

However, the Hercules is assigned only to U.S.-based armored units.

All names, some conclusions and many accident details were censored from a version of the report &#8212; sworn testimony compiled under Article 15-6 of Army Regulations &#8212; that the Army released to Stars and Stripes.

However, with the assistance of Stehle&#8217;s family and soldiers at the accident scene, Stars and Stripes was able to fill in some gaps.

The report finds overall that the Army has a number of problems to address including an institutional failure to communicate.

&#8220;Collectively speaking, we continue to allow our units to make the same training errors over and over again&#8221; by ignoring lessons learned by previous exercises, Cherry wrote.

Cherry made several recommendations, including:

An effort by Army officials, along with the tank&#8217;s manufacturer, General Dynamics Land Systems, to &#8220;trouble-shoot and update tank recovery methods,&#8221; then distribute the improved techniques Army-wide.

A detailed terrain analysis of the Grafenw&#246;hr training area to create a map identifying potential hazards.

However, whether the Army has accepted the recommendations is unknown.

Family members and his comrades are convinced that soldiers on the scene did everything humanly possible to save Spc. Jonathan Stehle.

Many soldiers nearly succumbed to hypothermia themselves in a vain attempt to rescue Stehle after the soldier&#8217;s M1A1 Abrams tank slid into a giant mud hole Nov. 8 at Grafenw&#246;hr Training Area.

Soldiers who were present when the accident happened about 10:40 a.m. leaped into action, according to soldiers&#8217; testimony in a November investigation and to members of Stehle&#8217;s unit, Troop B, 1st Squadron, 1st Cavalry Regiment of the 1st Armored Division.

Witnesses told an Army investigator that dozens of soldiers &#8212; supported by German heavy- equipment crews &#8212; worked seamlessly to pull out the tank while other soldiers fought rising water and tried to free Stehle.

With the gun tube and turret stuck forward, Stehle was trapped by wires and safety grating. Troop 1st Sgt. Roy Bartnick worked behind Stehle in the tight, water-filled space inside the turret underneath the main gun, holding the soldier&#8217;s head up and assisting with a breathing tube. Soldiers outside &#8220;were using anything they could to dig out the mud,&#8221; including Kevlar helmets, said Capt. Phillip Sounia, 32, Troop B commander. &#8220;But no matter how fast we dug, water kept flowing in,&#8221; Sounia said.

In gut-wrenching testimony, soldiers testified that Stehle was calm as the water rose, but asked his rescuers to hurry because he could no longer feel his legs in the freezing water. But the water quickly rose over Stehle&#8217;s head, said the troop&#8217;s senior medic.

On Nov. 4, outgoing U.S. Army Europe Commander Gen. Montgomery Meigs sent a memorandum USAREUR-wide stating that during fiscal year 2002 &#8220;the Army experienced the worst accident rate, for both ground and air, and number of fatalities in recent history.&#8221; He reminded officers and soldiers to make safety a top priority.

Now the 1st AD tank gunner&#8217;s family is lobbying U.S. lawmakers and Army officials to make a number of safety changes, including giving Europe-based armored units recovery vehicles capable of handling the 68-ton M1A1 Abrams tank. It is also asking the Army to improve the way it tracks &#8212; and warns soldiers about &#8212; training ground hazards.

Stacie Storrie, Stehle&#8217;s sister, said in a telephone interview from her home in College Station, Texas, that she was most shocked to discover that M-88 recovery vehicles at Grafenw&#246;hr that day couldn&#8217;t pull her brother&#8217;s tank out of a large, water-filled hole because they were designed to tow older, much lighter tanks.

&#8220;It flabbergasts me that the Army has three other vehicles developed, and millions of dollars spent on these vehicles, and they don&#8217;t have them&#8221; in Europe, she said.

She&#8217;s still waiting to hear from Army officials why newer, more powerful M-88 Hercules models are not assigned to Europe.

Stars and Stripes requested to interview Col. David Lawrence, the 1st AD&#8217;s liaison to the family, about its requests. Division public affairs officials directed queries to the 7th Army Training Command at Grafenw&#246;hr. However, a 7th ATC spokeswoman said the command has no knowledge of the family&#8217;s requests.

Storrie, on behalf of the family, sent letters to Texas Republican Sens. John Cornyn and Kay Bailey Hutchison, asking their assistance in making certain Hercules are assigned to European training areas, and in making other safety changes.

In those letters, Storrie and her husband, David, wrote, &#8220;It is our supported opinion that Jonathan&#8217;s death will be in vain if the U.S. Army does not react immediately and decisively to utilize the proper recovery vehicle &#8230; for future M1A1 extraction under similar conditions. The needless death of our brother, son and husband could have been avoided by simply supplying the Armed Forces with what is already in their care, custody and control stateside to units that are overseas.&#8221;

Cornyn responded that he had contacted Department of Defense officials about the family&#8217;s concerns, and would relay any reports on the accident.