Report: Allen backs pause in withdrawal from Afghanistan in 2013 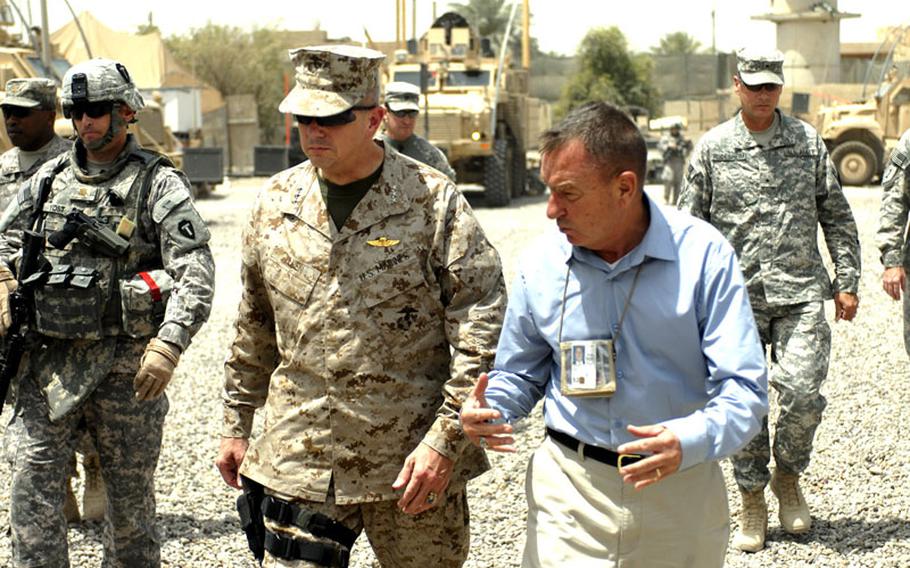 Lt. Gen. John Allen, center, speaks with a member of a Provincial Reconstruction Team 6 in Iraq. Allen was selected to succeed Gen. David Petraeus as the commander of the Afghanistan war. (Brian Tierce/U.S. Army)

STUTTGART, Germany &mdash; The top military commander in Afghanistan is privately recommending that once the planned U.S. troop reductions for 2012 are completed there should be a pause for 2013, The Wall Street Journal reported Wednesday citing anonymous sources.

The newspaper reported that Marine Gen. John Allen and other NATO officers are concerned that continued reductions in 2013 would make it harder to clear and hold insurgent havens.

Allen, who commands U.S. and NATO forces in Afghanistan, has shared his thinking with visiting congressional officials and delegations, the paper said.

In June, President Barack Obama announced plans to withdraw the 23,000 surge troops from Afghanistan in 2012, leaving roughly 70,000. Obama said they would leave at a steady pace.

Allen&rsquo;s position reflects the findings of an internal assessment by NATO&rsquo;s International Security Assistance Force, which warned that reducing U.S. troop levels below 68,000 would complicate efforts to protect supply lines and bases ahead of the scheduled security handover in 2014, WSJ reported.

However, officials in Afghanistan told WSJ that discussions about drawdown plans beyond 2012 are just now beginning within the military and the administration.

&ldquo;Gen. Allen continues to emphasize that decisions about troop presence post-September 2012 have not been made, and it is premature to speculate about those numbers,&rdquo; Rear Adm. Hal Pittman, the senior ISAF spokesman, told the WSJ.