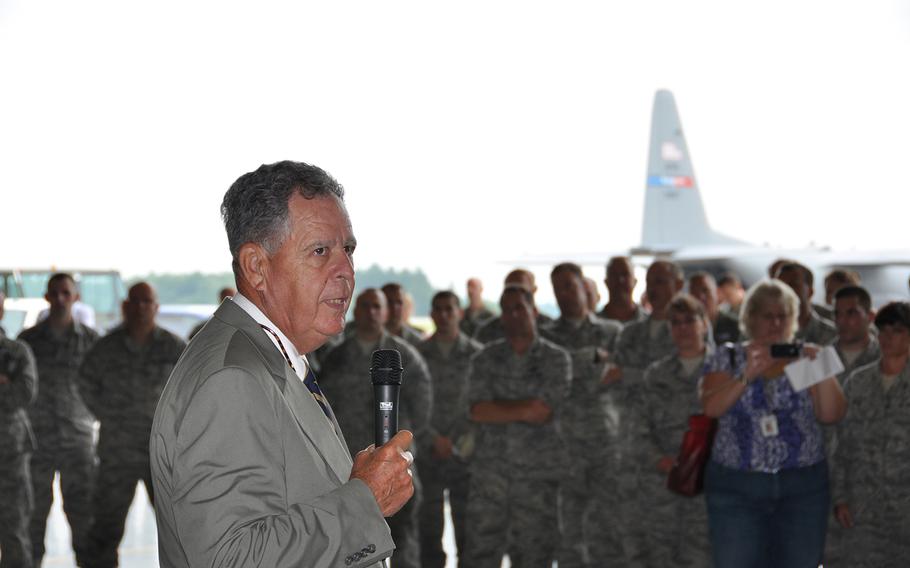 Dennis M. McCarthy, chairman of the National Commission on the Structure of the Air Force, speaks in a hangar at Mansfield-Lahm Air National Guard Base, Ohio, in July, 2013. A congressionally mandated commission says the Air Force needs to use Reserve and Guard members more in order to remain prepared for action during an era of budget cuts. (U.S. Air Force)

WASHINGTON — With continuing budget constraints on the horizon, the Air Force needs to use “untraditional thinking” and consider the untapped potential of its highly experienced reserve airmen, the head of a congressionally established study group said Friday.

In a report issued Thursday, the National Commission on the Structure of the Air Force recommended a major shift of manpower and resources from the active duty to the reserve component.

But commission chairman Dennis McCarthy, who spoke to reporters in Washington, admitted getting the military to accept such a change would not be a simple task.

“ ‘Part-time’ force structure … costs less than the force structure provided by ‘full-time’ personnel,” the report said. “Recognizing that some missions must be performed by the Active Component, the Air Force can, and should, entrust as many missions as possible to its Reserve Component forces.”

Among dozens of recommendations, the report called for increasing the number of integrated units with active, Guard and reserve personnel serving together. That would enhance “cultural melding” that began with the components fighting alongside each other in recent wars, McCarthy said.

“The tribes, if you will, are less distinct today,” he said. “But I also think you have to realize that if you don’t keep working at it, the tribalism will reform.”

He added, “People who serve together, who get to know each other, don’t revert to their tribe.”

The commission told Congress that the Air Force needs flexibility to either close bases or shut down unneeded parts of them, McCarthy said.

But that line of argument has brushed off each time Defense Department officials have raised the issue of a new round of the Base Closure and Realignment process.

“We weren’t specific about when, where, but we said, you ought to have the flexibility to do that so that you could make these force structure changes in a smart way,” McCarthy said. “There’s no question that this whole facility issue and infrastructure issue is a tough one, but it’s only one of the tough questions.”