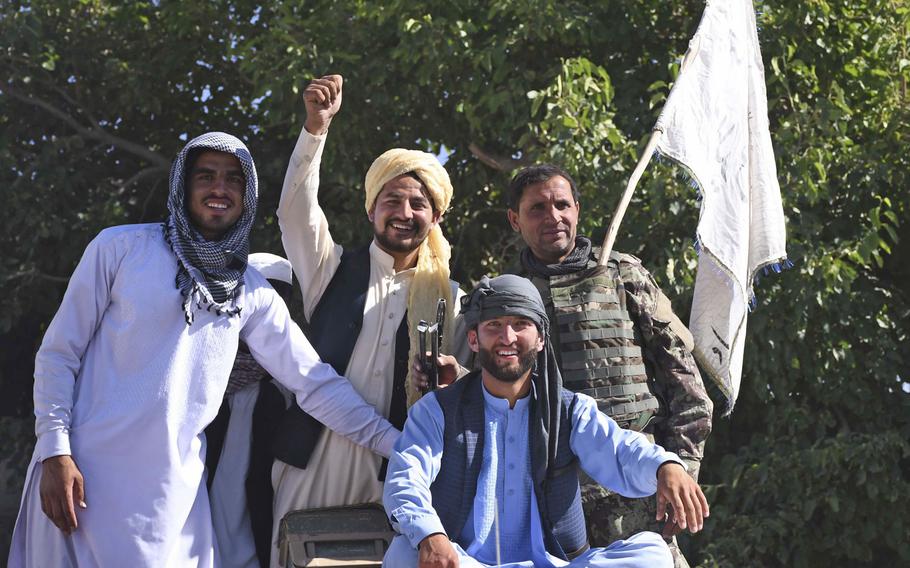 Buy Photo
Residents of a Taliban district and an Afghan army soldier pose for photos with a Taliban flag in Logar province, June 16, 2018. Across the country, photos of Taliban and government troops taking photos of each other spread online during an unprecedented cease-fire between the Taliban and the Afghan government. (J.P. Lawrence/Stars and Stripes)

Buy Photo
Residents of a Taliban district and an Afghan army soldier pose for photos with a Taliban flag in Logar province, June 16, 2018. Across the country, photos of Taliban and government troops taking photos of each other spread online during an unprecedented cease-fire between the Taliban and the Afghan government. (J.P. Lawrence/Stars and Stripes) 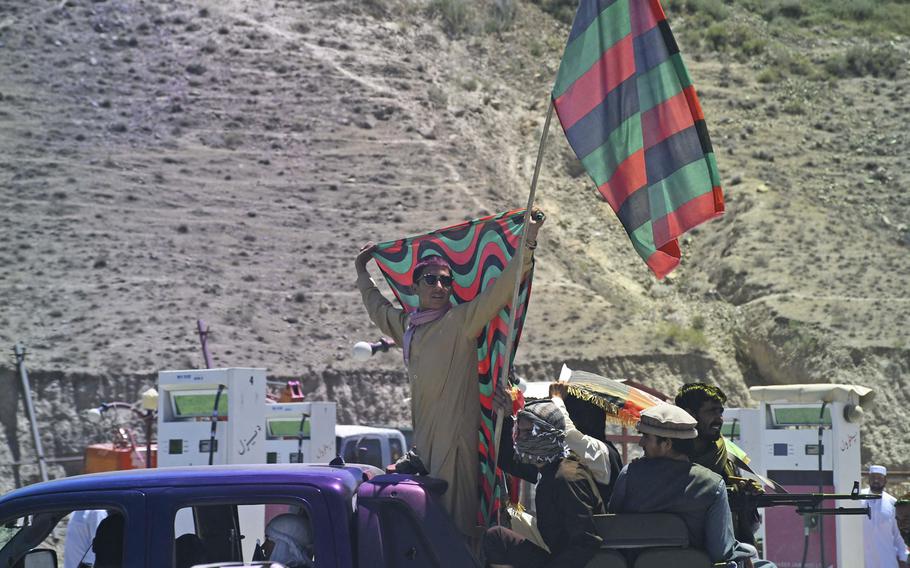 Buy Photo
In Pul-e-Alam, provincial capital of Logar, men flying both Taliban and Afghan flags climbed aboard military vehicles for impromptu parades, took selfies, and hugged government soldiers and police officers, June 16, 2018, during an unprecedented cease-fire between the Taliban and the Afghan government. (J.P. Lawrence/Stars and Stripes)

KABUL, Afghanistan — The Taliban’s ability to maintain discipline among its members throughout their recent cease-fire may raise hopes the militant group — often described as fractious and disorganized — could unite for peace talks, a report released Thursday by an international think tank said.

“That Taliban leaders were able to enforce a major political decision throughout the movement is particularly noteworthy,” the report by the Brussels-based International Crisis Group said. “Even members who questioned the logic behind the cease-fire respected their leaders’ decision.”

The Afghan government launched an eight-day unilateral cease-fire in June, to which the Taliban responded with its own three-day cease-fire.

President Ashraf Ghani had announced the cease-fire as part of a strategy to engage the Taliban in peace talks without preconditions. He made his gesture without a promise by the militants that they would reciprocate.

The Taliban have often been seen as a loose coalition of fractious tribesmen, with local warlords commanding bands of guerrillas operating semi-autonomously from any central military or political command. But the mostly peaceful three-day Eid holiday revealed surprising levels of unity within the insurgent group, the report said.

Interviews conducted by the Crisis Group with key Taliban and Afghan leaders provided a glimpse into how the unprecedented joint cease-fires came into being.

A small group of Taliban leaders lobbied for a positive response to Ghani’s offer of a cease-fire, telling observers that the group sought to change its image as purely a “war machine,” the report said.

The idea of a cease-fire had been floating around in Taliban circles since at least last winter, but insurgent leaders deemed the gesture too risky and too likely to be cited by U.S. officials as proof of success by NATO military forces in Afghanistan, now involved in a mainly training and advisory role.

The insurgents announced their own cease-fire during the first three days of the holiday of Eid, which marks the end of Ramadan. The announcement meant there would be three days in which the two cease-fires would run concurrently.

Analysts in Kabul and Washington told Stars and Stripes that part of the Kabul government’s strategy in declaring the cease-fire seemed aimed at splitting the Taliban into pro- and anti-peace factions. They said it was unclear how much control the Taliban leadership in Quetta, Pakistan, has over local commanders and crime bosses affiliated with various insurgent factions.

Taliban leaders, meanwhile, believed a successful cease-fire could demonstrate the movement’s cohesion. In that respect, the Taliban succeeded because they enforced the truce without anyone going rogue, the report said.

In many parts of Afghanistan, the cease-fires led to spontaneous celebrations in which Taliban and Afghan soldiers hugged one another, sipped tea and took selfies together. Families that had been torn apart by a long war reunited.

The celebrations revealed several beliefs held in common by both the Taliban and government forces. In interviews with researchers, both sides spoke repeatedly about the desire for peace and for the nation to come together.

A belief that outsiders, not Afghans, had fueled the war united both sides, the report said.

In one set of interviews in Ghazni, a Taliban soldier and an Afghan soldier told researchers they were friendly toward one another because the real enemies were from America and Pakistan.

“America and Pakistan are both enemies of the Afghans,” the unidentified government soldier said. “We both agree that if all Afghans come together to say ‘no’ to foreigners, there will be peace in Afghanistan.”

Members of the Taliban told researchers that they might be willing to compromise on certain issues once believed to be irreconcilable, including the continued presence of foreign troops and leaving the government’s security forces intact if the guerrillas are allowed to join.