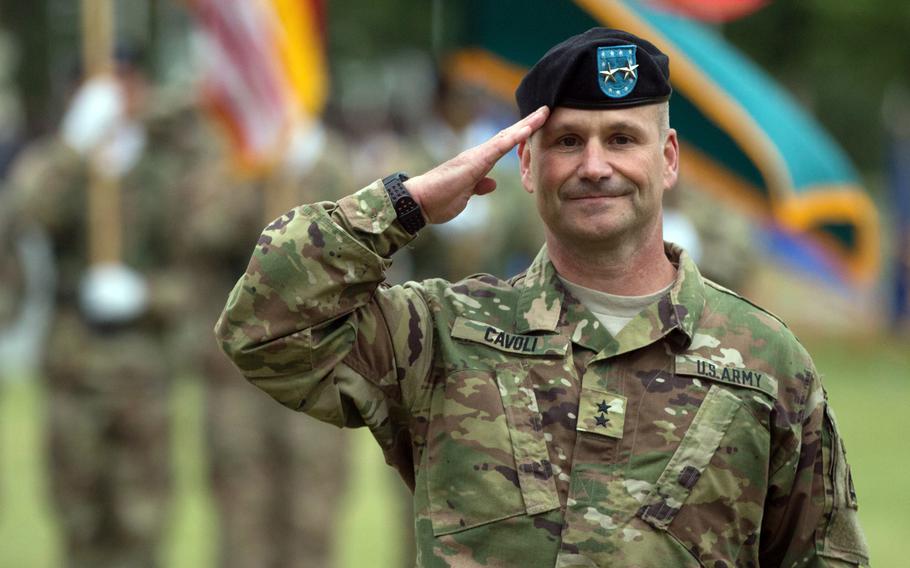 Maj. Gen. Christopher Cavoli salutes moments after receiving his second star during his change-of-command ceremony held at Grafenwoehr, Germany on July 15, 2016. Cavoli is reported to be the Army's pick to command the mission in Europe. (Michael S. Darnell/Stars and Stripes)

Maj. Gen. Christopher G. Cavoli is the Army’s pick to command the mission in Europe, according to a report.

Cavoli, who now leads the Hawaii-based 25th Infantry Division, has been tapped to command U.S. Army Europe, according to a report by Defense News that cited an unnamed defense official.

If confirmed, Cavoli would bring recent experience in Europe to the job. Before assuming command of the 25th Infantry Division in 2016, Cavoli led the 7th Army Training Command in Grafenwoehr, Germany.

The USAREUR mission has been revitalized in the past three years as the military refocuses its efforts on the Continent in response to concerns about a more assertive Russia. After two decades of drawing down, the Pentagon has boosted rotational forces in Eastern Europe and added tanks and artillery.

Cavoli’s past experience includes work on the Joint Staff as director for Russia issues. He is a Russian speaker, according to his Army biography.