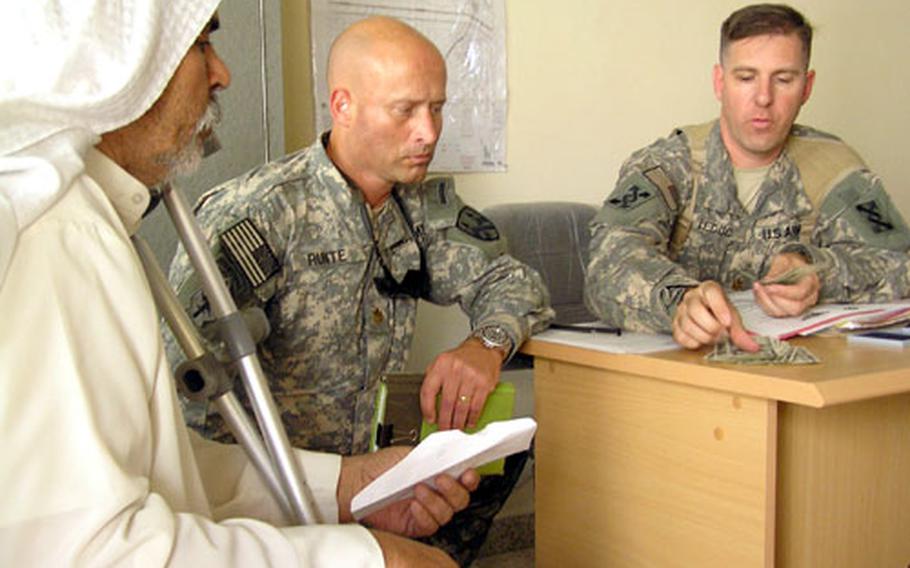 Maj. Kyle F. Runte, left, and Maj. Patrick LeDuc pay an Iraqi man U.S. dollars as part of a recent military claims commission in the town of Safwan. War reparations are one way the Army hopes to win hearts and minds in southern Iraq and to help protect U.S. soldiers escorting convoys through the area. (Edward Wingfield / Courtesy of U.K. Royal Army)

Once a month, a small group of soldiers from this Army camp outside of Kuwait City travel a few hours up the road to the southern Iraqi town of Safwan to address claims from local citizens of harm caused by coalition forces.

Fair game is anything shortly after President Bush declared &#8220;major combat operations&#8221; in Iraq were over, said Maj. Kyle F. Runte, International Military Affairs director for 377th Theater Sustainment Command. &#8220;If we were to pay every claim from during the invasion, we&#8217;d be paying millions of claims,&#8221; he said.

The British have operational control of Basra province, but have asked the U.S. Army to handle the claims commission. The British help provide security to U.S. soldiers on claims missions.

On a visit to Safwan over the weekend, Runte and Maj. Patrick LeDuc, Staff Judge Advocate for 143rd Transportation Command, dealt with 14 claims and received another half dozen. Not all 14 claims were granted; Runte and LeDuc didn&#8217;t say how many were denied, but they did dole out about $12,000, noting Iraqis prefer U.S. dollars to Iraqi dinars.

Before airing their grievances to the U.S. military claims commission, Iraqis must first meet with local leaders who attempt to weed out false allegations, Runte said. To legitimize claims, military officials look for documentation such as police or accident reports, photographs of damage, or proof of ownership. Claims cannot be more than two years old.

&#8220;By engaging the local authorities we empower them to discharge their responsibilities as civic leaders,&#8221; Runte said. &#8220;It enhances their legitimacy and credibility with their people.&#8221;

With help from interpreters, military officials listen to the Iraqis&#8217; stories, including recently that of a 59-year-old man who lost his leg from what he claimed was a war-related injury. Americans helped get him a prosthetic limb but he was still having trouble earning a wage to support his family, LeDuc said.

The claims commission is yet another way to fight the insurgency, Runte said. One of Runte&#8217;s jobs is to minimize disruptions of convoys along Iraq&#8217;s main supply route.

Southeastern Iraq is typically more peaceful than areas farther west and north, but in recent weeks there have been several attempted hijackings near Safwan of foreign contractors who drive the convoy supply trucks. One was pulled from his truck and killed, military officials said.

&#8220;We hope that it wins hearts and minds and maybe reduces insurgent activity on coalition forces on [the main supply route],&#8221; Runte said of the claims commission.

The process, LeDuc added, lets Iraqis use the rule of law to address grievances rather than taking vengeance on those who caused injury. Otherwise, he said, &#8220;hard feelings are going to develop towards our soldiers who are going through there.&#8221;