Repairing Baghdad, a neighborhood at a time Thursday’s two-hour mission for soldiers with the New York National Guard’s 69th Infantry had two parts: record where water lines had been ruptured by U.S. vehicles on Airport Road, and give out shoes and toys to kids. (Teri Weaver / S&S)

Thursday’s two-hour mission for soldiers with the New York National Guard’s 69th Infantry had two parts: record where water lines had been ruptured by U.S. vehicles on Airport Road, and give out shoes and toys to kids. (Teri Weaver / S&S) 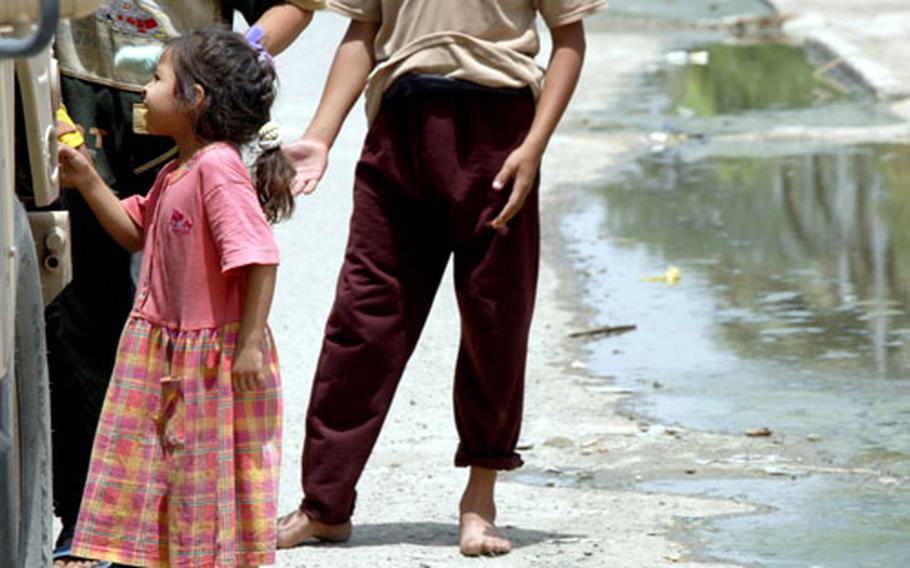 BAGHDAD &#8212; Iraqi children ran to the parked Humvees outside their homes the instant they realized U.S. soldiers had stopped to parcel out shoes, stuffed animals and bottles of water.

But before the kids, many in bare feet, could get to the traveling store that appeared in their Amariyah neighborhood, they had to leap over pools of sewage.

It&#8217;s Master Sgt. Joseph Marra&#8217;s job to handle both issues: doling out donations while trying to record, and fix, the infrastructure problems within parts of Baghdad.

&#8220;It would be so much nicer if we could do this without getting shot at,&#8221; he said with a smile Thursday afternoon, after the kids grabbed up four boxes of shoes and toys within 10 minutes.

At home, Marra, 51, runs construction projects for New York City. In Baghdad, he oversees clean-up projects for the part of the city patrolled by the New York National Guard&#8217;s 69th Infantry.

Marra, who lives in Tannersville, Pa., has been commuting between states for more than 20 years to be a part of the infantry unit known as the &#8220;Fighting Irish.&#8221; So it&#8217;s an appropriate coincidence that Marra&#8217;s battalion in Baghdad patrols what the American military calls Route Irish, but what most Westerners here refer to as &#8220;Airport Road.&#8221;

About 3&#189; miles separate the airport and the entrance to the Green Zone, the so-called safe haven in Baghdad that houses much of Iraq&#8217;s new government, the U.S. Embassy and scores of contractors.

Because of the frequent, high-profile traffic, the road is often a favorite target for insurgent attacks, according to Maj. Christopher Cerniauskas, 37, of Carville, La., the operations chief for the battalion.

To combat the attacks by hidden roadside bombs, Marra is overseeing a $226,400 contract that pays Iraqi workers to clean trash and cut back overgrown trees and bushes along Airport Road. The cleaner the road, the harder it is for insurgents to hide the bombs, he said.

On Thursday, Marra took a ride to monitor the crew&#8217;s work. The road was cleared, but only partially, and a few trees were growing into the medians, something he didn&#8217;t like.

Part of cleaning up Iraq includes fixing the parts of the city that American forces have damaged, Marra said. On Thursday, he found a geyser in a median caused by U.S. military vehicles rupturing irrigation lines.

Pools have formed for the same reason in several places along the route, close to where some small gardens of alfalfa, sunflowers, and vegetables grow. The leaks don&#8217;t drain the water supplies that go to houses and businesses, Marra said. But they do affect the water pressure, &#8220;which isn&#8217;t good to begin with,&#8221; he added.

The clean-up contract for the airport road is supposed to be complete in another two months, he said. As for the water, and the leaking sewage, Marra said he didn&#8217;t know. He puts the items on a list of needed repairs, and sends it up the chain to military leaders who make spending decisions, he said.