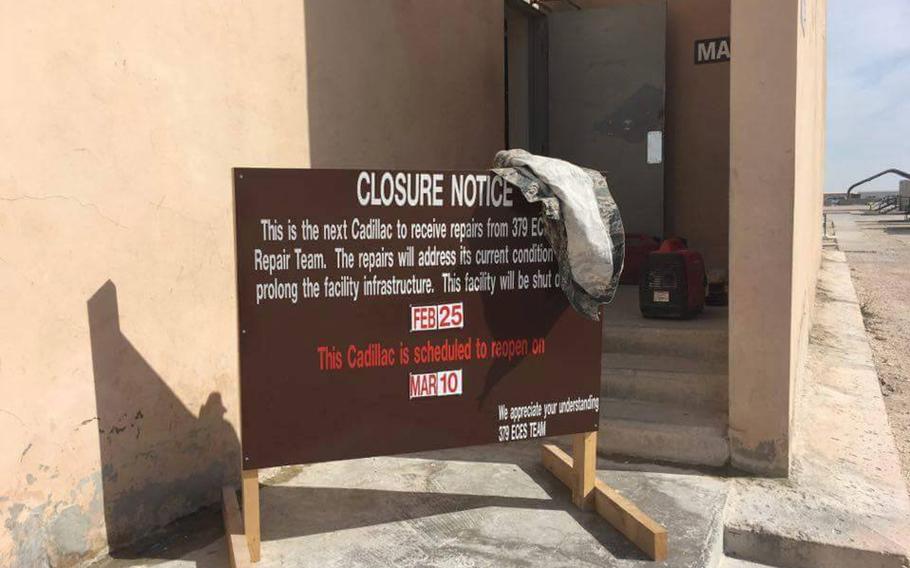 "People of the Deid," a Facebook group whose members have been to Al Udeid Air Base in Qatar, posted this photo showing bathroom and shower facilities at the air base closed for repairs. (Facebook)

"People of the Deid," a Facebook group whose members have been to Al Udeid Air Base in Qatar, posted this photo showing bathroom and shower facilities at the air base closed for repairs. (Facebook) 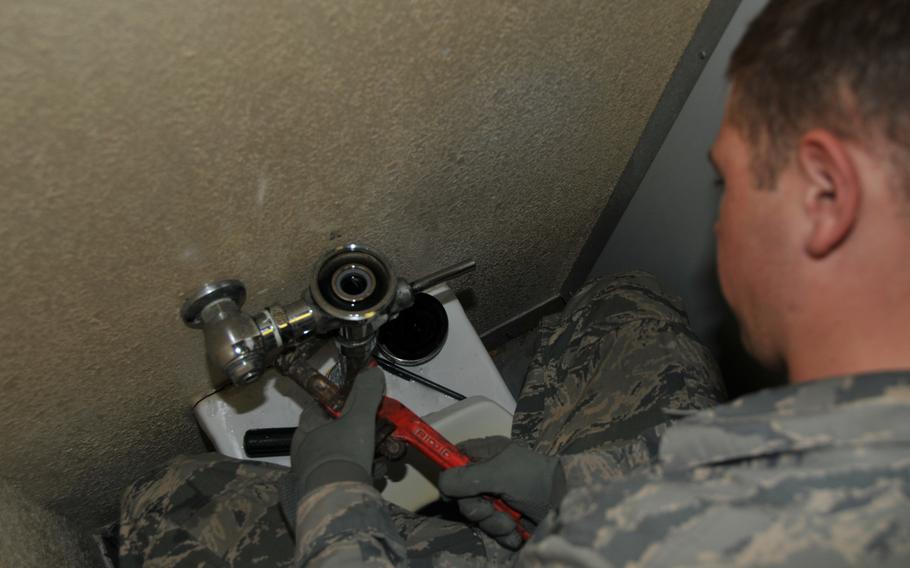 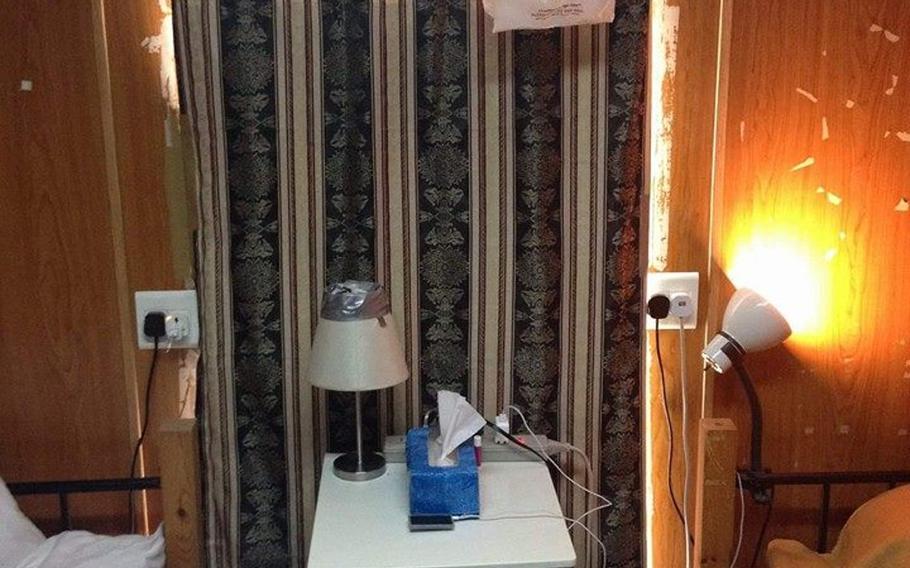 "People of the Deid," a Facebook group whose members have been to Al Udeid Air Base in Qatar, posted this photo saying, "Here's a picture of my mold catcher last year. No matter how much we cleaned it, there was mold in the centrifugal fan that couldn't be cleaned out." (Facebook) "People of the Deid," a Facebook group whose members have been to Al Udeid Air Base in Qatar, posted this photo showing mold coming out of the ceilings in a bathroom and toilet facility known as a "Cadillac." (Facebook) 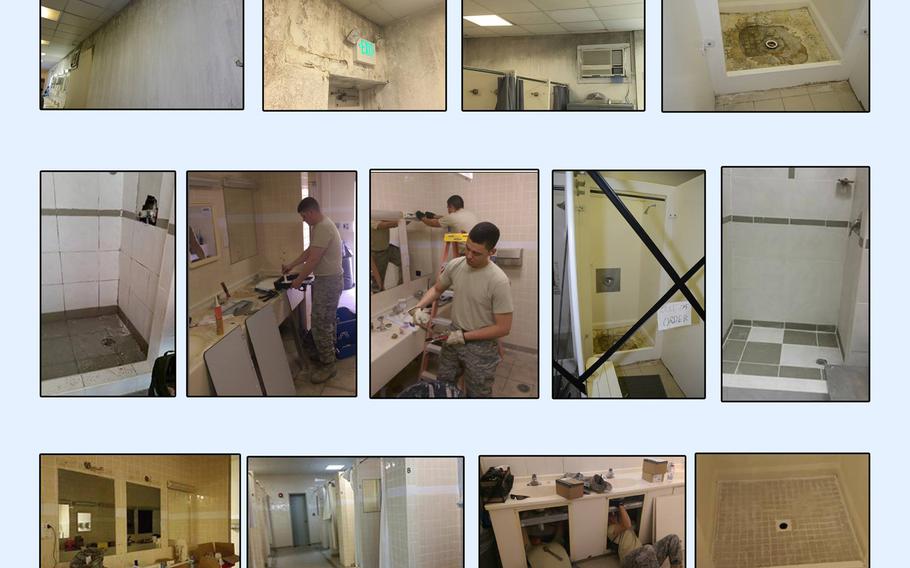 A collage of pictures shows moldy conditions in bathrooms at Al Udeid Air Base in Qatar. In a statement on Facebook, 379th Air Expeditionary Wing commander Brig. Gen. Darren James said he and his team would "work tirelessly to remedy the situation that has been years in the making." (Facebook)

MANAMA, Bahrain — The U.S. military commander of Al Udeid air base in Qatar said this week the base will work tirelessly to eliminate mold in living quarters, which others worry could be sickening some residents.

Brig. Gen. Darren V. James, 379th Air Expeditionary Wing commander, addressed the issue — which has been the topic of recent Congressional hearings — in an interview with Stars and Stripes and in a long post on the wing’s Facebook page.

“First, let me apologize for the current state of some of our facilities,” James said in his Facebook letter to base residents. “Let me state it clearly, the responsibility for these tired facilities rests squarely on my shoulders. The entire team and I will continue to work tirelessly to remedy the situation that has been years in the making.

“Second, I want you to know that your health and welfare tops your entire leadership team’s priority list and the conditions will improve.”

“I recently learned that our airmen at Al Udeid Air Base in Qatar are being forced to live in potentially unhealthy facilities and may be getting sick from black mold exposure,” Ayotte said at the Feb. 25 hearing. “Despite efforts by the local command there and the repeated requests of our airmen, the situation has not been fixed. In the last month, approximately 100 New Hampshire Air National Guard members experienced unacceptable living conditions, and I’m told that this black mold is coming out of showers, it’s in the bathrooms, it’s in the curtains and that some of our airmen are becoming sick and having symptoms as a result of [the black mold].”

The mold condition affects mainly temporary living quarters in the coalition compound serving forces at Al Udeid for fewer than 180 days. Officials don’t have the ability to determine whether the mold is related to any illnesses, Maj. Angela Webb, 379th Air Expeditionary Wing public affairs chief, told Stars and Stripes.

Regardless, the base is already taking steps to rectify the mold problem, he said.

In his interview with Stars and Stripes, James said that he recognized upon arriving in the summer of 2015 that there were issues with heating, ventilation, and air conditioning, or HVAC systems, as well as the “Cadillacs” — the Air Force’s term for bathroom and shower facilities. Because of the intense summer heat in Qatar, the base tackled the HVAC issues first, he said.

In the fall of 2015, the base conducted facilities condition assessments and formulated a plan on how to tackle the existing issues.

Efforts underway, according to James’ Facebook post, include greater quality control over the cleaning contract and repairs to facilities where mold is present.

For those repairs, James said, he has a civil engineering squadron team tasked with taking immediate corrective action based on work orders. These are typically minor repairs, like broken shower fixtures, faucets, tiles, and minor electrical or air conditioning unit repairs.

In facilities where the problems go beyond simple repairs, the base will take more drastic measures, James said, with plans to replace 49 of the trailer latrines and to renovate 10 others. Twelve trailers have been replaced so far, with 7 more expected this fiscal year, said James. The first renovation will begin next week.

The base is waiting on the completion of 20 semipermanent dorm-like facilities, James said. The new facilities, being managed by the Army Corps of Engineers, will house about 2,500 people.

There is no excuse for not taking action on issues that can be solved, James said.

“Ensuring that our soldiers, sailors, airmen, Marines, DOD civilians have an environment in which they can safely conduct some of there business and time away from work is important to us,” James told Stars and Stripes. “And we recognize they should not be exposed to anything that might jeopardize their safety, so we are taking those issues very seriously.”