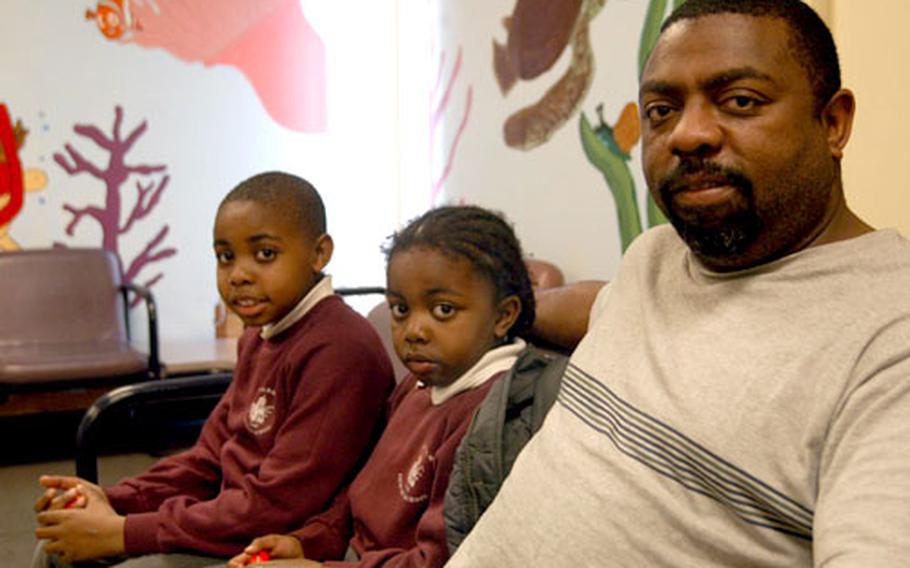 Retired airman Greg Coulson and his children, Danniel, 6, and Ethan, 9, wait for an appointment at the Lakenheath pediatrics clinic. The pediatrics ward is scheduled to move into a new space in the main building as part of upcoming refurbishments. (Ben Murray / S&S)

Retired airman Greg Coulson and his children, Danniel, 6, and Ethan, 9, wait for an appointment at the Lakenheath pediatrics clinic. The pediatrics ward is scheduled to move into a new space in the main building as part of upcoming refurbishments. (Ben Murray / S&S) 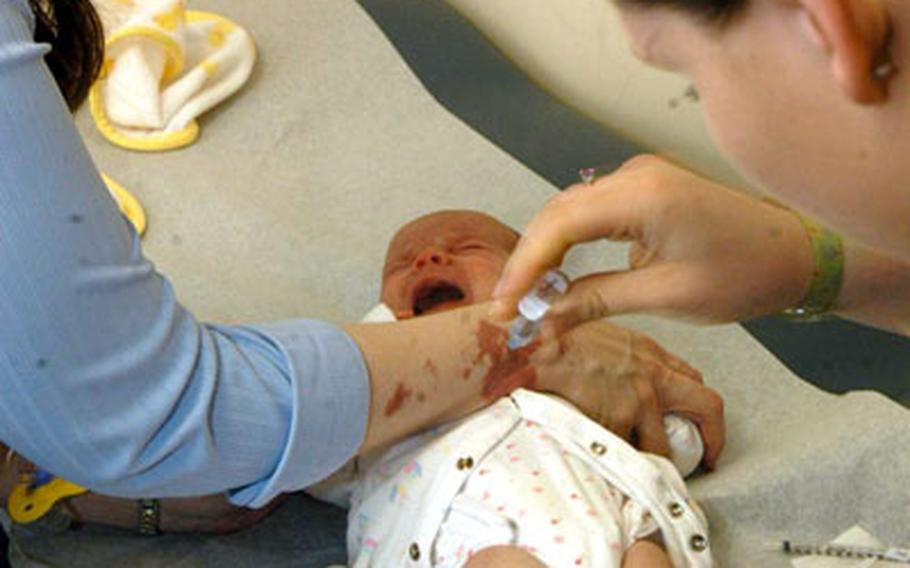 RAF LAKENHEATH &#8212; If they were happening in a human body, the upcoming changes at the Air Force&#8217;s main hospital in England might be described by doctors as causing mild internal discomfort.

In the next several months, the medical facility will initiate a new electronic record-keeping system, start major refurbishments and begin an annual rotation of doctors, hospital officials said last week.

Symptoms may include longer appointment times, delays on elective procedures and referrals to British doctors, plus a reduction in nearby parking when contractors move in equipment later in the summer.

The hospital expects the impact to be relatively small on patients, Dr. (Lt. Col.) Kevin Flood, chief of medical staff at the hospital, said. The Lakenheath facility is scheduling appointments around the upcoming staff rotations and has moved most of the offices that needed to be cleared out for construction, he said.

Still, the hospital will see gaps in staff numbers as groups of doctors leave and their replacements filter in.

In the swap, internal medicine will change out two-thirds of its providers, flight medicine will turn over 50 percent, pediatrics will roll over 40 percent, and 30 percent of family practice doctors are set to move out, Flood said.

Doctors from two specialty areas &#8212; urology and optometry &#8212; will also rotate out, leaving gaps of anywhere from a month to eight weeks, he said.

Flood said that kind of turnover isn&#8217;t unusual at the hospital during the out-processing season, which usually siphons off about a third of the facility&#8217;s doctors, and officials deal with it in several ways.

To cover the outgoing doctors, Lakenheath tries to keep appointments for preventive procedures, such as annual physicals, to a minimum to make room for more &#8220;acute&#8221; cases and has doctors overlap departments to pick up as many patients as possible, he said.

Patients with a specialty need such as urology may be referred to private English doctors, he said.

Regardless of how it handles the rotation, the hospital will likely have to reduce the number of appointments with the remaining doctors starting in July, when the staff adjusts to the Armed Forces Health Longitudinal Technology Application, which is the new Department of Defense-wide record-keeping system.

The system, intended to replace paper-based patient records, will require doctors and nurses to take time out from seeing patients to learn how to use it. Individual appointment times will have to be lengthened to factor in the learning curve on the software.

Andy and Ann Williams, who frequently use the medical facility for appointments for their newborn daughter and infant son, also said the changes didn&#8217;t worry them.

Ann Williams said she doubted the hospital would delay important appointments for patients, especially toddlers, and referrals to an English hospital didn&#8217;t bother her.

By August, the hospital plans to be under way with its $7.3 million renovation, refurbishing large areas of the original medical center built in the 1960s, King said.

The estimated 18-month project has already displaced a number of departments from their traditional homes in the hospital. Incoming construction equipment will soon eat up adjacent parking, King said.

To get to appointments on time, patients should plan to come early to find a parking space and their doctor&#8217;s office, he said.

When complete, the pediatrics unit and the family practice, public health, immunizations and physical medicine departments will be housed on the ground floor of building 932, King said.

Optometry will move upstairs, and patient administration and the referral management center will move to building 922, he said.

In the second phase of the project, the hospital will add a set of all-inclusive labor, delivery, recovery and postnatal care suites, allowing new parents to go through the entire birth process in one room, he said.

Though there will be the &#8220;inconveniences of construction&#8221; during the renovations, Flood said, the building won&#8217;t affect patients&#8217; access to doctors.