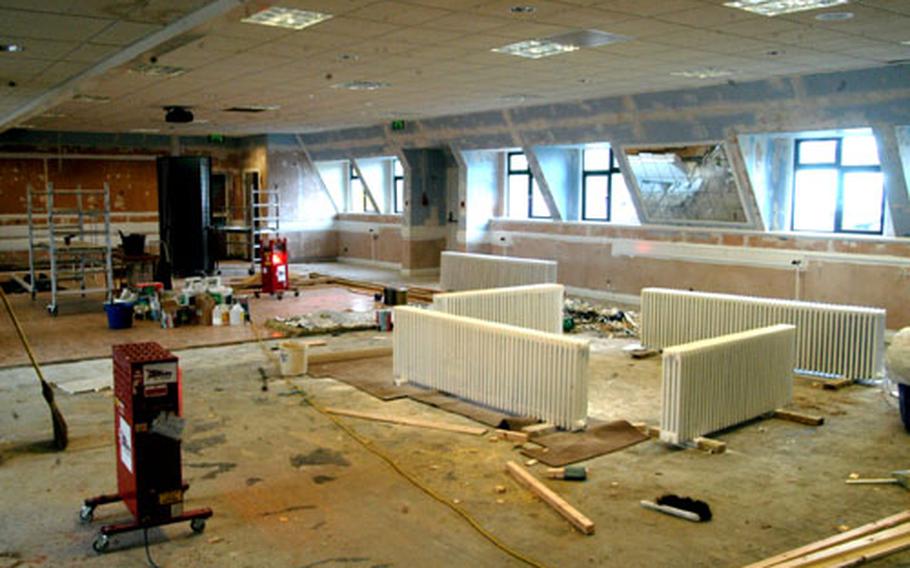 RAF FAIRFORD &#8212; A $300,000 project is under way to renovate the community center here in the wake of last year&#8217;s monsoon-like downpours that resulted in widespread flooding on base and in area communities.

Base officials delayed the renovations until recently so they could combine them with a quality-of-life upgrade as a cost-cutting measure, said Maj. Steve Grace, commander of the 420th Civil Engineering Squadron.

&#8220;It made sense to carry out the work in conjunction with the QOL upgrade, as it involved overlapping areas,&#8221; Grace wrote in an e-mail to Stars and Stripes on Tuesday. He added that the project, being carried out by Haymills Construction Co., is slated to be completed by the end of May.

Flood damage repairs will include redecoration, replacing flooring and repairs to the ceiling and roof. The QOL upgrade, also being carried out by Haymills, will replace an existing bar, cellar, dispenser equipment and coolers as well as add security and structural modifications to walls and doors, Grace said.

Another reason for the delay was that it took a long time for the building to dry out after workers removed the sodden carpet in preparation for the renovations, he said.

Ten facilities and eight housing units suffered roughly $200,000 in water damage after 5&#189; inches of rain fell on the base and the surrounding area in one day late July.

The summer flooding got international news coverage and left thousands in the region without running water. It also put a portion of the nearby town of Fairford under water.

Floodwaters affected more than 4,000 homes and 500 businesses across Gloucestershire, where Fairford is located, according to a BBC news report.

The center was one of the base facilities hardest hit by the rainstorms. Officials made housing units, which had $40,000 in damage, forcing four households to move, their first priority.

The other water-damaged buildings on base, as well as buildings that suffered minor damage on RAF Welford, have been repaired, Grace said.