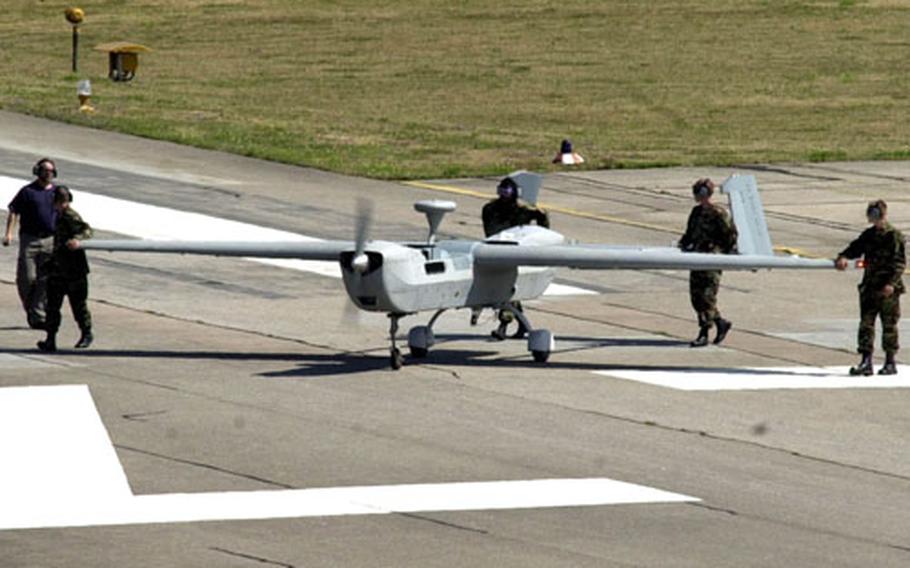 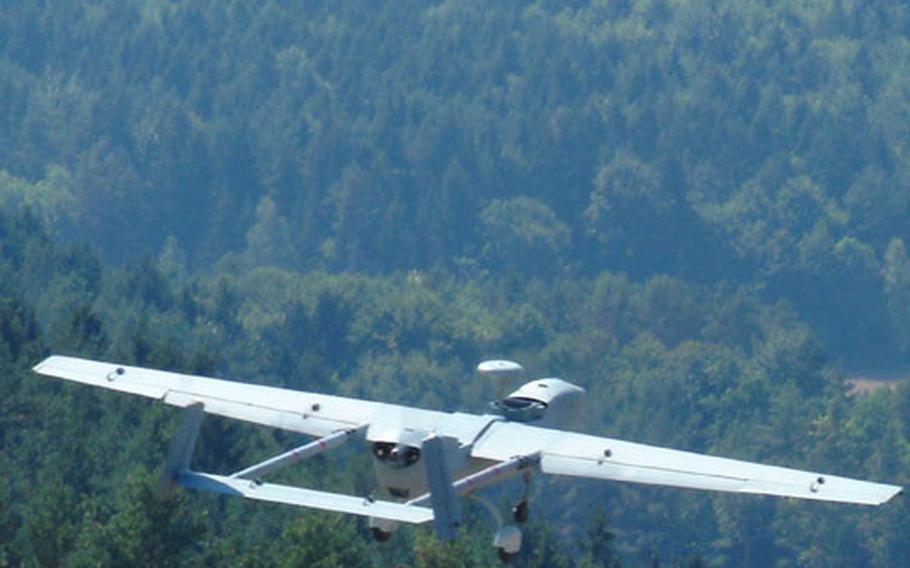 An unmanned aerial vehicle soars above the 282nd Base Support Battalion&#39;s airfield at the Combat Maneuver Training Center in Hohenfels, Germany, earlier this month. ()

HOHENFELS, Germany &#8212; Hohenfels has long been home of the Combat Maneuver Training Center, where high-tech gadgetry is often fielded to improve the training experience for units in Europe.

Now, Hohenfels is home to a new unit that will launch its gadgetry higher: literally.

The unit&#8217;s UAV, known as the Hunter, is chock-full of surveillance equipment and costs about $1.1 million. The equipment includes cameras and laser targeting and designation equipment, Fittz said. The Hunter measures in at 23 feet long and has a 29-foot wing span.

The Hunter is powered by two motorcycle engines and runs on unleaded gasoline. Although it travels by air, Fittz and others in the unit seldom call it an aircraft. He said the military intelligence community treats it like a truck, which seems only fitting since the UAV&#8217;s air-conditioned &#8220;cockpit&#8221; is in the back of an Army truck.

Landings and take-offs are performed by external pilots using a remote control box near the airfield. Once the UAV is at an altitude of about 2,000 feet and headed toward its mission, the external pilot hands control over to the aerial vehicle operators inside the truck, said John Hench, a contracted external pilot who conducted the first Hunter UAV flight at Hohenfels on Aug. 15.

The aerial vehicle operator can either program a course or select a location on a computerized map &#8212; the UAV uses the Global Positioning System &#8212; and it travels to, and circles over, the designated location, awaiting further input from the operator, said Master Sgt. Ron Miller, the unit&#8217;s standardized instructional pilot.

While the aerial vehicle operators learn their skills at Advanced Individual Training as other military specialties do, external pilots must undergo a year of additional training, Hench said.

While getting the UAV in the air seems challenging enough, setting it down gently from a position on the ground would require a lot of confidence in one&#8217;s own abilities.

&#8220;They basically have to bring the UAV down toward them while doing everything the opposite way they would do it if they were actually in the vehicle,&#8221; Fittz said.

Hench has six years of experience with the Hunter, including four years on military active duty at Fort Hood, Texas.

However, many of the soldiers assigned to Company A are straight out of school, Fittz said.