Remembering the young at cemetery in England 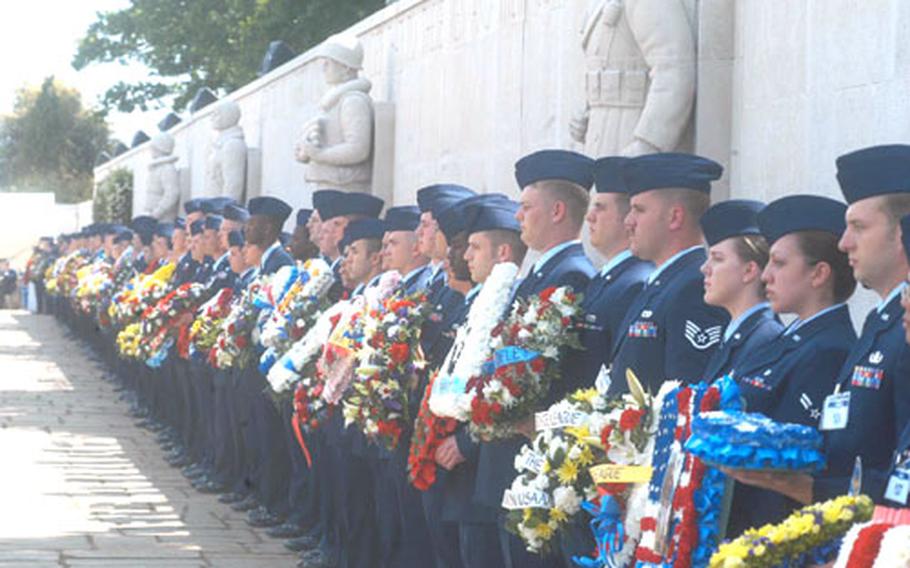 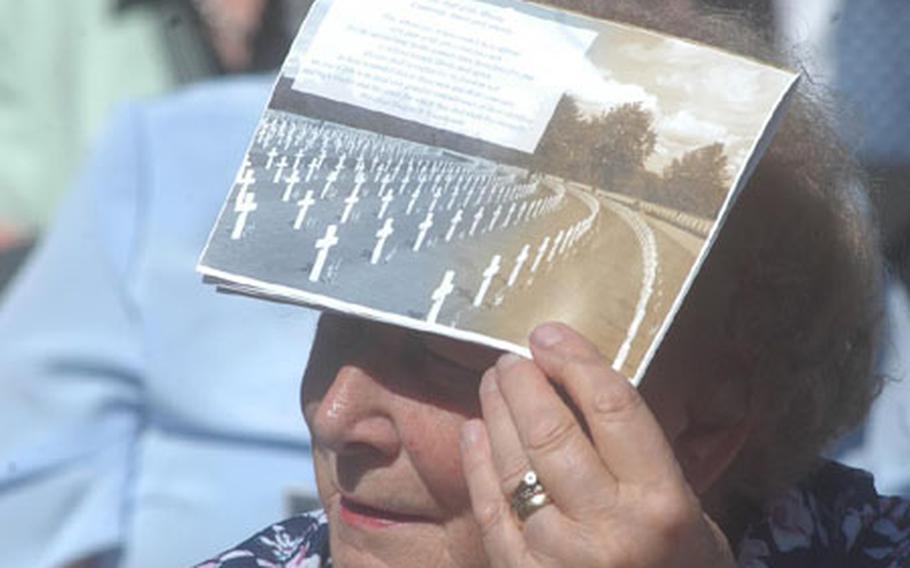 A woman uses a program to shade her eyes during the Memorial Day ceremony Monday at Cambridge American Cemetery in Madingley, England. (Ron Jensen / S&S)

That&#8217;s how one speaker at the Cambridge American Cemetery on Monday described the World War II veterans who were among the 2,000 people who spent Memorial Day under a bright English sky for the 60th such ceremony held at the cemetery.

The ceremony was enriched by the presence of a few dozen veterans of World War II, many of them on their way to Normandy, France, for next weekend&#8217;s D-Day anniversary events.

David Johnson, charge d&#8217;affaires at the U.S. Embassy in London, referred to them in his remarks.

Harry Campbell, 80, was one of those old men. A B-17 navigator with the 457th Bomb Group, he flew 30 combat missions during the war and saw many friends killed.

He planned to visit a few graves before the end of the day. One belongs to Maj. Ed Dozier, who commanded the 748th Squadron.

The major died when his bomber crashed on takeoff from Glatton airfield near Peterborough, England.

Ed Dugan, 85, from Blue Point, N.Y., missed D-Day when a mortar round landed short during training two weeks before the invasion and wounded him and others in the 505th Parachute Infantry Regiment, part of the 82nd Airborne Division.

He did manage to make a combat jump in Holland later in 1944 and ended the war in Germany. He will go to Normandy later this week for the seventh time.

The ceremony, organized by the 48th Fighter Wing at RAF Lakenheath, Third Air Force at RAF Mildenhall and the U.S. Embassy, traces its roots to the days just before D-Day when the cemetery was still a temporary resting place for America&#8217;s war dead.

It is a popular event each year and Monday&#8217;s wonderful weather brought out a crowd estimated at roughly 2,000. More than 100 wreaths were laid along the cemetery&#8217;s Wall of the Missing. The U.S. Air Forces in Europe band played.

And four F-15E Strike Eagles from the 494th Fighter Squadron at RAF Lakenheath performed an impeccably timed missing man formation over the cemetery, roaring past just as the final gasp of taps was played.

&#8220;It&#8217;s beautiful. It&#8217;s absolutely beautiful,&#8221; Senior Airman Ryan Bousquet of the 48th Operations Support Squadron at RAF Lakenheath said as he looked around at the cemetery.

His grandfather was a ball turret gunner on a B-17 in World War II. He was shot down and spent time in a German prisoner of war camp.

&#8220;When I found out about this, I knew this was something I wanted to do,&#8221; said Bousquet, who was one of about 200 active-duty airmen to volunteer to help at the ceremony. He did it, he said, as a tribute to his grandfather, who died a few years ago.

Hugh Duberly, the lord lieutenant of Cambridgeshire, the title given to the Queen&#8217;s representative in the county, spoke of the kinship between America and Great Britain.

The graves in the cemetery, he said, are testimony to the depth of that relationship.

Johnson, too, mentioned the partnership formed during that war 60 years ago. For a few years, he said, the British stood alone &#8220;night after terrible night,&#8221; while Adolf Hitler threatened their country.

He called the British victory in the Battle of Britain &#8220;the turning point of the Second World War.&#8221;