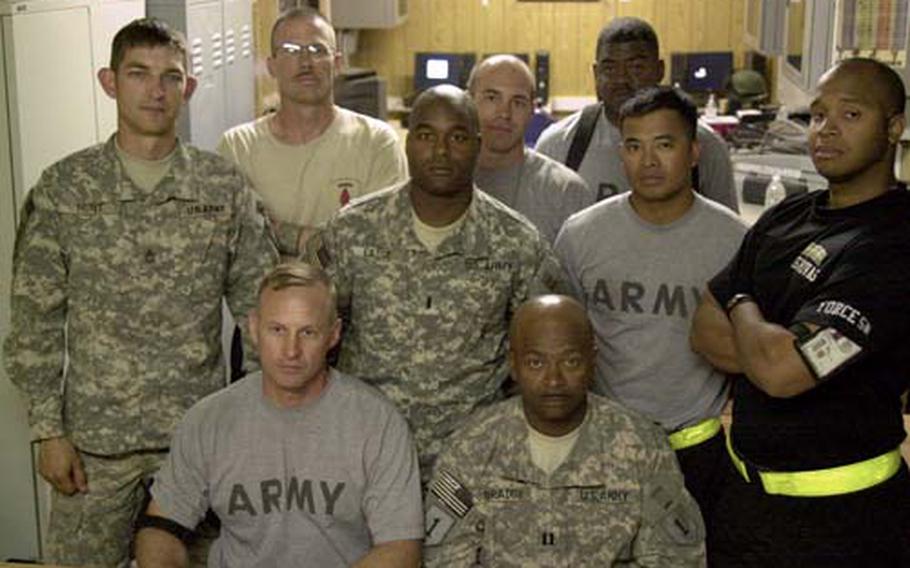 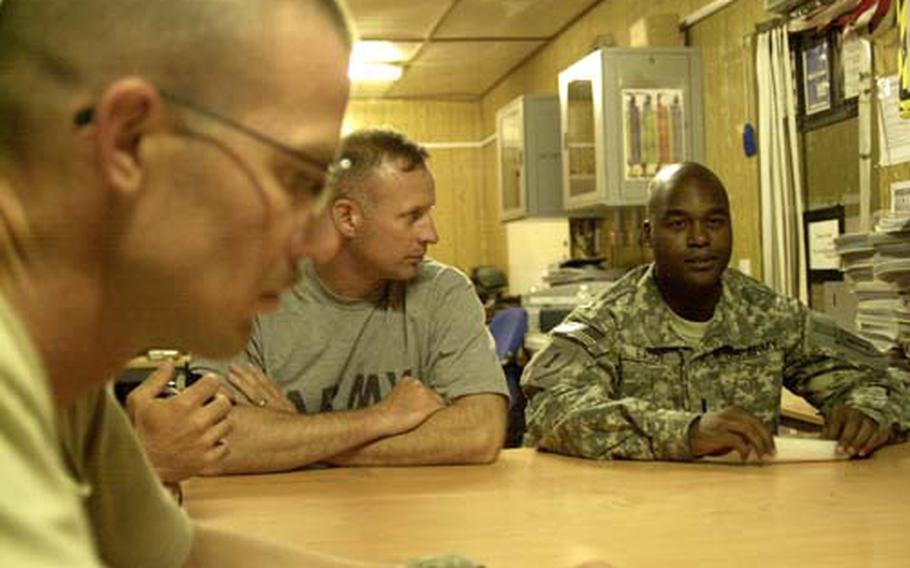 BASRA, Iraq &#8212; Steven Hutchison wanted to be a grunt again. He wanted to help train Iraqi infantry units. He wanted back in the fight.

He called the Army and told them he&#8217;d like to rejoin. They&#8217;d take him, but they wanted him to do a year with a headquarters unit in Afghanistan before going back to infantry.

So the Army sent Maj. Steven Hutchison, at age 59, to Afghanistan for a year so that, at 60, he could go to Iraq. He was assigned to the 2nd Battalion, 34th Armor Regiment, 1st Brigade Combat Team, 1st Infantry Division at Fort Riley, Kan.

His Afghanistan tour made him a few days late meeting his unit at Fort Riley. The soldiers &#8212; all 10 of them &#8212; were getting mad at their new boss for being late. They also had heard he was old.

Hutchison, of Scottsdale, Ariz., spent the next few months beating them at runs, hours at the gym and return trips to the dessert line. He won them over with profane stories and practical jokes. One example of his humor involved a tampon delicately hung from the front of an up-armored truck as recognition for exceptional work among his men.

When all else failed, he caught them in bear hugs and fed them butterscotch candies. His favorites were Werther&#8217;s Originals.

The Army had given him a variety of people including a communications expert, two intelligence guys, an engineer, a medic, a mechanic, an air defense soldier and one grunt like himself. There was also a finance officer who is still wondering why the Army picked him for the team.

Their mission? To improve policing and security standards among Iraqi coastal border guards.

The absurdity was not lost on Hutchison. Neither was the mission. He used Google and persistence to learn about boat piloting and navigation. He&#8217;d survived the Tet Offensive in Vietnam.

He could teach former Iraqi sailors at Umm Qasr how to counter smuggling on the Sha&#8217;at al Arab, the waterway that connects the Euphrates and Tigris rivers with the Persian Gulf.

"The guy knew what he needed to do," said Sgt. 1st Class David Rieckmann, 37, the communications soldier.

From Vietnam to Iraq, Hutchison had three marriages. He&#8217;d also earned a slew of degrees and ended up teaching psychology at Loyola Marymount University in Los Angeles. After 9/11, he wanted to rejoin. His wife wouldn&#8217;t have it. He spent the first few years of the war tending to her until she died from an illness.

Hutchison retired as a major in 1988, when Nestor was 7. Two decades later, he found himself in a different Army, one he thought paid too much attention to details that did little to make a good soldier.

It took him three months to put a sling on his weapon, an everyday requirement Hutchison couldn&#8217;t bear because it made the gun clink and clatter. The enemy will hear you, he would tell the younger guys.

He&#8217;d often strut to the shower in nothing more than tighty-whiteys, even with females around. When he passed younger soldiers on runs, he did so in non-regulation short-shorts, with pride. He never, ever secured his chin strap on his Kevlar helmet.

In one of his biggest capers, he adopted a dog. A stray crossed his path and from then on, Hutchison brought it scraps from breakfast, lunch and dinner. He wrote a memo authorizing the dog as a member of the unit and requesting it get shots from the base&#8217;s vet. He signed it himself.

Soon his boss, Col. Warren Perry, learned of the transgression. Hutchison merely did what so many soldiers do when caught breaking the rules: He lied.

While Hutchison kept busy training guards at Umm Qasr and playing jokes on his soldiers, his unit tried to figure ways to get back at him. The best, they said, would be if some big news outlet did a story on him. They loved him like a father, and they&#8217;d learned more about being a soldier under him than any previous officer. They also knew he&#8217;d be completely ticked to be in the spotlight.

The best part of the story, his team said, was that this 60-year-old man&#8217;s training regimen was working. The coastal guards were doing a better job keeping the smuggling at bay. They were beginning to make a difference. For proof, they point to his death.

"They targeted him," Smith said of the criminals that planted the bomb. "It was a hit. It was due to his pushing. ... There&#8217;s so much crime and smuggling. They wanted him out."

It was Mother&#8217;s Day, May 10, two days before Hutchison was to go on leave. The team was leaving Umm Qasr after another day of work. The area hadn&#8217;t had a bomb in years.

But there was an explosion shortly after 2 p.m., followed by a burst of profanity from Hutchison. He&#8217;d been hit in the gut. His team got him out of his truck, set a perimeter and called for medical evacuation.

Hutchison asked for morphine and began talking about Vietnam.

After the helicopter left, the team stayed at the area as the wrecked truck was hauled away and another bomb, unexploded, was found. They finally made it back to camp around 10:30 p.m. They were exhausted, but not too worried. They&#8217;d been told Hutchison was stable.

But Perry met them later with the news. Hutchison had died.

"It was a lot to process," said Sgt. 1st Class Andrew Hunt, 31, one of the intelligence experts.

The team stayed awake that night to accompany Hutchison&#8217;s body to the airfield for his flight home. They helped plan his memorial at Contingency Operating Base Basra. They even convinced the Army that Diana Ross and the Supremes&#8217; "Someday We&#8217;ll Be Together" was patriotic enough for the ceremony.

CNN broadcast the news. As the Army&#8217;s oldest soldier killed in Iraq, Hutchison&#8217;s story wound up in newspapers across the country.

Hutchison&#8217;s team is ready to welcome his replacement, but don&#8217;t expect the new major to fill his shoes.

One team member, Chief Warrant Officer 2 Elext Holmes, will speak at Fort Riley this week for another memorial ceremony. The team is working with a humane society to get Princess Leia shipped back home. Until then, she&#8217;ll be sleeping in Hutchison&#8217;s bed.