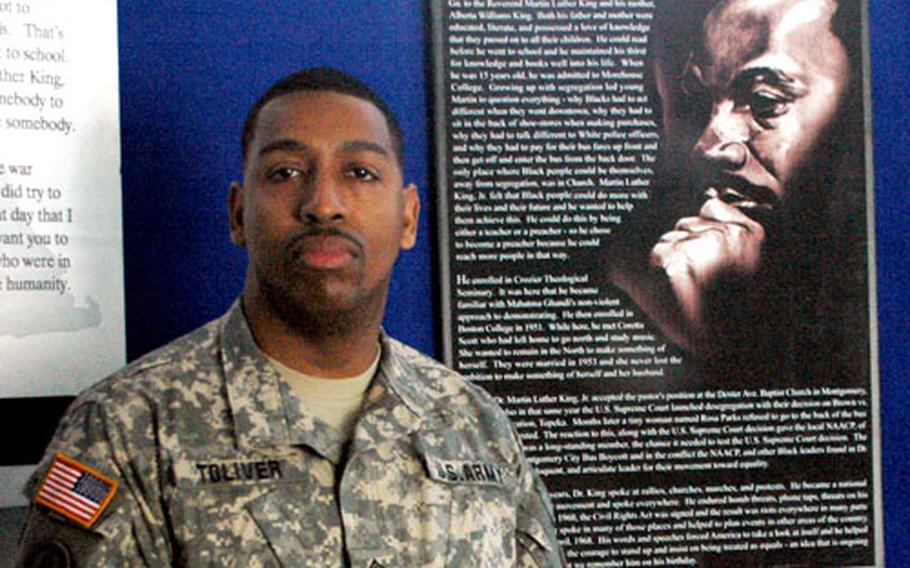 &#8220;I grew up in a household with two older brothers who both were involved in the civil rights movement,&#8221; Toliver said, adding that his brothers did not always see eye-to-eye on how their mutual goals should be reached.

During that time, explained Toliver, two main schools of thought existed within the civil rights movement.

One, led by King, advocated a nonviolent approach, preaching tolerance, equality and understanding and expressing its message through peaceful protests.

The other faction argued that to obtain equal rights, blacks must take a more militant stance and be prepared to fight back against white supremacist groups.

Toliver characterized the militant groups as trying &#8220;to bring themselves up by pulling other people down.&#8221; That, he contended, was why King&#8217;s methods were so successful and why his legacy has had such lasting impact.

Toliver, who grew up in a predominantly black community in Houston, said that joining the military brought him a new experience: serving beside soldiers from different racial and ethnic backgrounds.

He said that while today&#8217;s military does a good job of promoting racial awareness and equality, there is definitely room to grow because, &#8220;let&#8217;s face it, we are all a product of our own upbringing.&#8221;

When asked if he ever experienced racial prejudice in the Army, Toliver said: &#8220;There have been times where there has been some racism, but by and large, no.&#8221;

Today, serving as an assistant to the U.S. Army Japan senior chaplain, Toliver cited the importance of maintaining a strong connection with King&#8217;s almost 40-year-old messages.

&#8220;Many of the younger soldiers today just don&#8217;t have the same connection to the civil rights movement that a lot of the older soldiers do,&#8221; he said.

Younger soldiers who are asked to take part in an event related to King or the civil rights movement often treat the request as just another work detail, he said.

Toliver called for giving younger soldiers a more personal connection to the civil rights movement by including older servicemembers in such functions so younger soldiers can hear of their experiences.