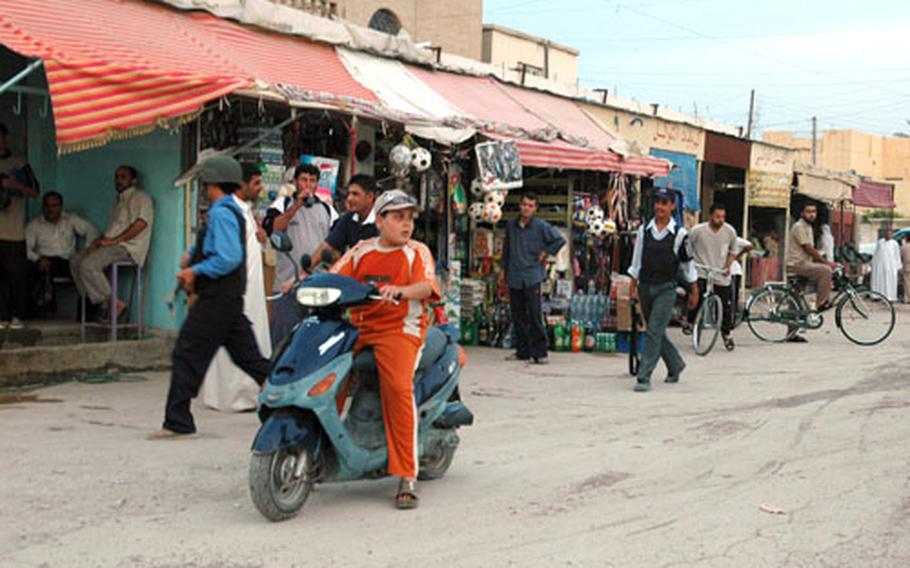 This market area, in one of Ramadi’s more prosperous neighborhoods, was full of customers one recent night. Some came out to see the Marines and Iraqi police walking the streets. Others had opened their stores and set out chairs to have their tea. (Teri Weaver / S&S)

This market area, in one of Ramadi’s more prosperous neighborhoods, was full of customers one recent night. Some came out to see the Marines and Iraqi police walking the streets. Others had opened their stores and set out chairs to have their tea. (Teri Weaver / S&S) 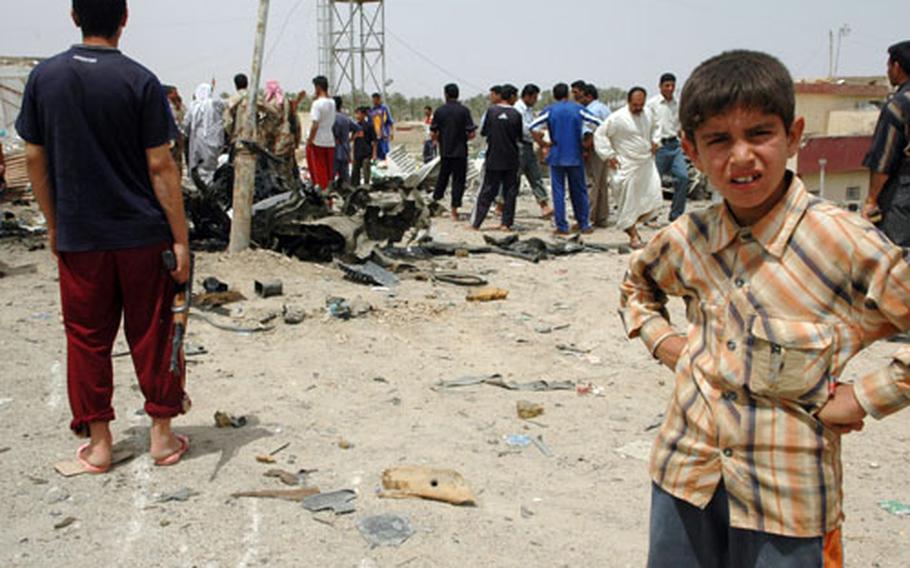 An Iraqi boy stands in front of a burned car, the remnants of one of two car bomb attacks at a market just outside the city of Ramadi. In the past month, the city has seen relative calm, but the outskirts remain vulnerable. (Teri Weaver / S&S) 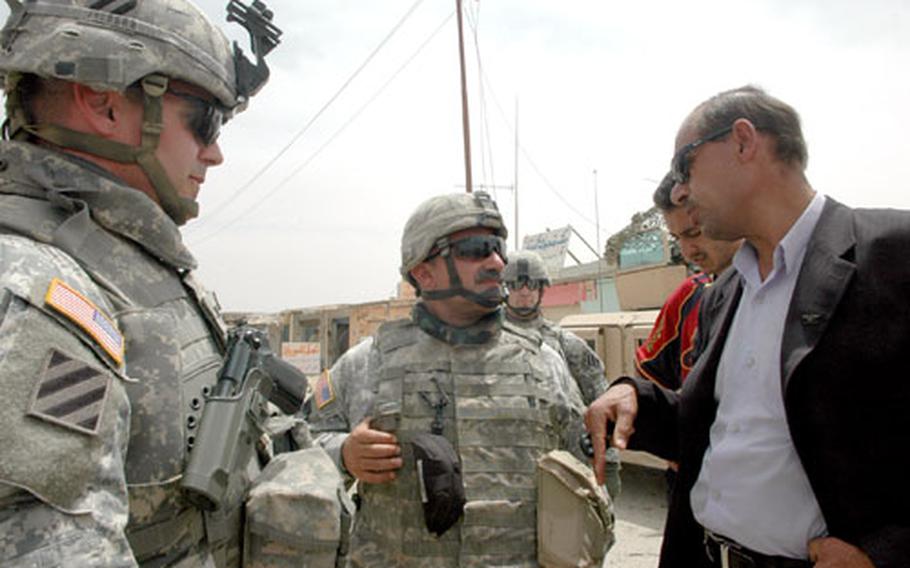 Army Col. John Charlton, left, commander of the 1st Brigade Combat Team, 3rd Infantry Division, talks with an Iraqi police chief, right, after the car bomb explosions outside of Ramadi. The explosions happened less than a mile from the city limits, and in between two Iraqi police checkpoints meant to protect the market. (Teri Weaver / S&S)

RAMADI, Iraq &#8212; On a routine trip last week into Ramadi&#8217;s center, a driver in a Marine Corps convoy saw the tailgate on one of the trucks swinging open.

Rather than risk losing the gear inside, the convoy stopped and a couple of Marines jumped out to fasten the tailgate. A few short weeks ago, the same convoy would have sped on, the Marines on the ride said later. The risk of standing on a Ramadi street, exposed to sniper fire and bomb attack, would have outweighed the risk of lost cargo, they said.

&#8220;It&#8217;s not that kind of fight anymore,&#8221; said Staff Sgt. Amos Livingston, a Marine who patrolled Ramadi a year ago and recently returned with the 3rd Battalion, 7th Marine Corps Regiment.

It&#8217;s been weeks since a major attack or explosion hit inside the city limits, according to military statistics. Part of the change comes as local tribal leaders and police forces have banded with military troops. The joint effort has led to massive security sweeps, discoveries of piles of hidden munitions and the dismantling of a makeshift car bomb factory, the military says.

Key to this effort are neighborhood police and military outposts &#8212; called joint security stations &#8212; set up where the violence dwells, Iraqi and U.S. officials say.

These stations are just taking hold in Baghdad as part of the military&#8217;s surge to defeat the insurgents. But they started in Ramadi months ago, and they seem to be making a difference, commanders, troops, Iraqi police and citizens say.

The tactic involves sweeping the area clear of insurgents while embedding U.S. troops inside the community. The troops &#8212; like Livingston &#8212; live alongside Iraqi forces, letting them run operations while the Americans provide financial and military support.

But clearing the violence in one sector pushes it into another, Charlton knows.

Despite the relative calm inside Ramadi, two suicide car bombs on May 7 hit an Iraqi police checkpoint and a market less than a mile east of the city limits, killing 16 &#8212; eight police and eight civilians. Nineteen others, mostly civilians, were injured.

A few weeks prior, Charlton won approval to include that market in his area because he knew the enemy was running in that direction. The same day the car bombs hit, an Army unit was in the midst of opening a security station in the area.

Chasing the insurgency is also happening in other directions. Earlier this spring, a road leading south from the city to four villages was littered with buried bombs, and its farms were stashes for insurgents&#8217; munitions. About two weeks ago, a security station opened at the southern end of the route.

But it came at a price. A corporal from Company C, 1st Battalion, 77th Armor Regiment, lost his legs in a roadside bombing in late April, before the calm began.

Charlton and others know one of the biggest vulnerabilities is suicide car attacks.

An Iraqi store owner injured in the May 7 attacks agreed.

He was brought to the military hospital at Camp Ramadi following the attacks. He was surprised the American military would treat him &#8220;like one of the family,&#8221; he said through an interpreter. He also said the attack that hit his store seemed inevitable.

But, still, he said, things are better than a year ago. Then, he would never have trusted the Iraqi police to protect him if he offered up information about suspected insurgents. Now, he would go to them, he said. He did not feel safe enough, however, to print his name in an American newspaper.

The hospital staff keeps track of the violence differently. On May 7, they treated 12 wounded, including one Iraqi police officer. Two other people died of wounds. The last time that many injuries was April 26, 11 days earlier.

Another thing has changed in Ramadi.

&#8220;I&#8217;m done with raiding homes and scaring women and children,&#8221; Army Capt. Ian Lauer said during a meeting with Iraqi troops last week. The company commander with 1st Battalion, 77th Armor Regiment, was talking to an Iraqi officer about a tip on some hidden weapons. It&#8217;s Lauer&#8217;s job, in part, to urge the Iraqis to do more of their own raids and their own arrests.

Charlton is on his third tour in Iraq. He knows peace and calm can be short-lived in Iraq.

In Ramadi, he&#8217;s concerned that the swelling ranks in the local police force could prove opportune for al-Qaida to enlist its own recruits. He wants to start rebuilding infrastructure, before local residents stop believing that America will help fix the electrical grid and the sewage lines. He&#8217;s aware the local tribal leaders, who are helping drive the cooperation and calm, may begin their own power struggle.