Remains of North Korean soldier returned in ceremony at DMZ 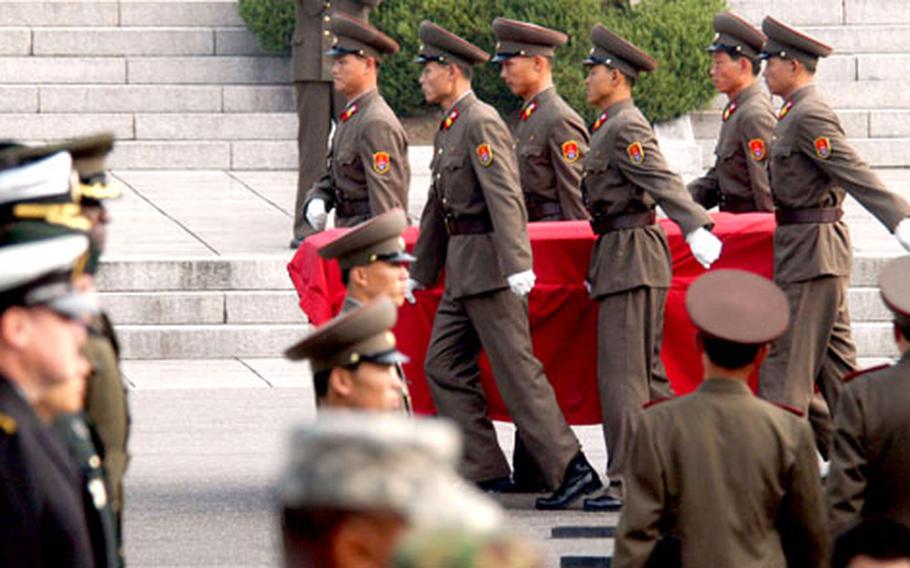 North Korean soldiers carry the repatriated remains of a comrade at the Demilitarized Zone on Friday. (Jimmy Norris / S&S)

PANMUNJOM, South Korea &#8212; The body of a North Korean enlisted soldier who was believed to have drowned was returned home Friday after a brief ceremony with full military honors at the Demilitarized Zone.

According to United Nations Command spokesman David Oten, it was the second repatriation of a North Korean soldier&#8217;s remains this year. The first was returned in July.

Oten said five to seven North Korean bodies are found in South Korean waterways each year because the rivers in Korea flow south.

Civilian remains are repatriated through the Korean Red Cross.

United Nations Command pallbearers then carried the coffin to the center of conference row and passed it to North Korean pallbearers.

The body was found Aug. 24 by South Korean soldiers on the banks of the Hantan River, south of the military demarcation line and north of Rodriguez Range. The United Nations Command convened a special investigation team that recommended contacting North Korea to arrange for the body&#8217;s return.