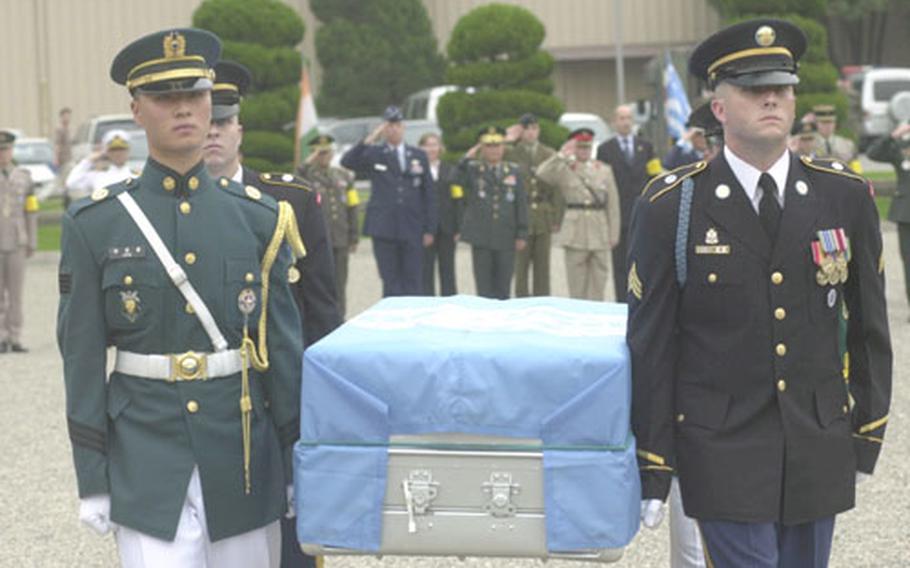 The remains of a U.S. soldier are carried to a waiting hearse Thursday on Knight Field at Yongsan Garrison. The remains, which will be sent to Hawaii for forensic identification, were recovered in North Korea by a team from the Joint POW/MIA Accounting Command in Hawaii. The remains were recovered near the Chosin Reservoir, the scene of fierce fighting during the Korean War in the fall of 1950. (Jeremy Kirk / S&S)

YONGSAN GARRISON, South Korea &#8212; After a 30-day mission in North Korea, a recovery team brought back what&#8217;s believed to be the remains of a U.S. soldier from a hilly area where pitched battles were fought during the Korean War.

The remains &#8212; contained in a silver-colored casket draped with a U.N. flag &#8212; were given a three-gun salute and solemnly loaded into a hearse Thursday afternoon during a ceremony at Knight Field on Yongsan Garrison.

U.S. Forces Korea commander Gen. Leon LaPorte said the soldier paid the ultimate price for the freedom enjoyed by all in South Korea.

The remains will be flown to the Joint POW/MIA Accounting Command at Hickam Air Force Base, Hawaii, for identification.

The soldier, believed to have belonged to the 7th Infantry Division, was recovered from the Chosin Reservoir by a 28-person team. The team also spent time in Unsan Country about 60 miles north of Panmunjom, but no remains were recovered there, Davis said.

The Chosin Reservoir was the scene of fierce fighting pitting U.N. troops against troops from China and North Korean in November and December 1950.

The body repatriated Thursday was reclaimed during the second mission so far this year in North Korea. Eighteen sets of remains were repatriated in May.

Two more missions are planned this year, he said.

The team works with soldiers from the North Korean People&#8217;s Army. Communication is limited with the North Koreans but the teams reportedly do draw close to some of their partners.

But access to local populations &#8212; often an important source for clues &#8212; is limited in North Korea, Davis said.

Since 1996, 29 joint operations have been conducted in North Korea with 200 sets of remains recovered. The remains are believed to be those of U.S. servicemembers.

The recovery, Davis said, helps fulfill the &#8220;sacred&#8221; promise to always look for those who are missing. This year, teams from JPAC will travel to Vietnam, Laos and Tibet seeking U.S. servicemember remains, Davis said.