Army photographer Lee Embree snapped this photo of the crash site of a Japanese dive bomber while he was aboard a B17 on the morning of the Dec. 7, 1941, attack on Hawaii by the Japanese. (U.S. National Archives)

Army photographer Lee Embree snapped this photo of the crash site of a Japanese dive bomber while he was aboard a B17 on the morning of the Dec. 7, 1941, attack on Hawaii by the Japanese. (U.S. National Archives) Two Japanese ''Val'' dive bombers fly above Ewa Beach on the morning of Dec. 7, 1941, a scene captured on film by Army photographer Lee Embree aboard a B17 that arrived in Hawaii from California just as the surprise attack was underway. (U.S. National Archives) 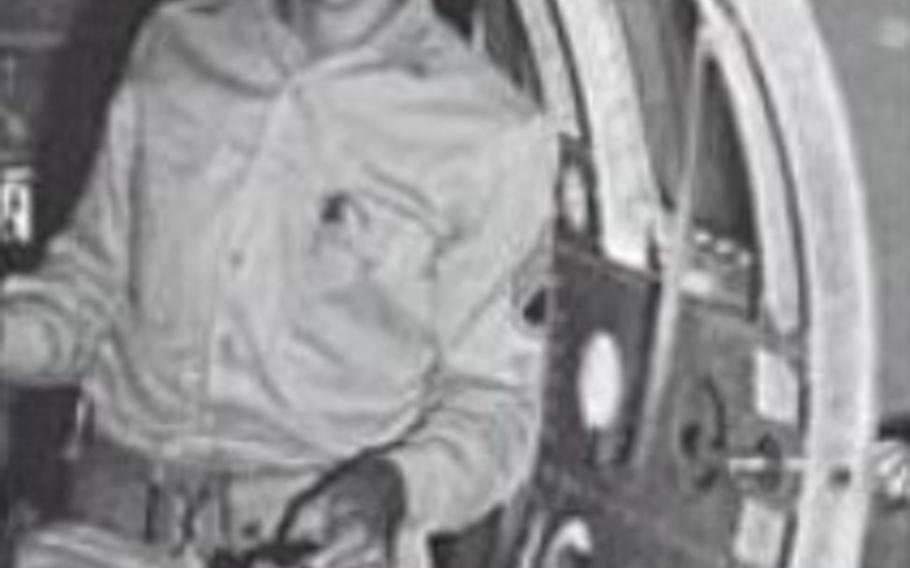 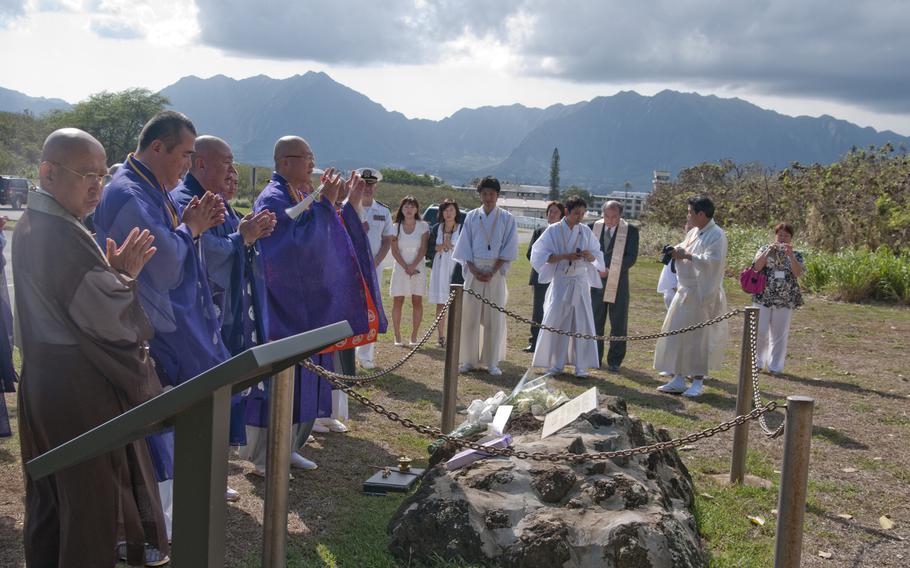 Members of the Japan Religious Committee for World Federation pray during a Dec. 7, 2010, memorial of Japanese pilot Lt. Fusata Iida at Marine Corps Base Hawaii in Kaneohe Bay. A bronze plaque was erected on the base to mark where Iida, who was part of the force that attacked Oahu in 1941, crashed his plane and died. (Christine Cabalo/U.S. Marine Corps)

FORT SHAFTER, Hawaii — A local historian is convinced he’s located the site where a two-man Japanese dive-bomber crew crashed on the morning of Dec. 7, 1941, and was buried nearby: the tony grounds of Hoakalei Country Club Golf Course in Ewa Beach.

“The responsible thing to do is at least make an attempt to find these guys,” said John Bond, a semi-retired Ewa resident who has labored for years to bring recognition to the largely forgotten Marine Corps Air Station Ewa and its role in the 1941 battle. “If they can’t find them, then put up a marker saying this is a crash site and remember that so-and-so was killed here. I don’t understand why that would be a problem.”

But the golf course’s owner, Haseko Development, has been less than receptive to the idea of an active search for the grave on the property, which the company announced in October was being sold to a Japanese firm. Haseko Vice President Sharene Saito Tam said the company has done all it was required to do in identifying culturally and archaeologically significant artifacts on the property during development and has found no evidence of such a grave. Further, she said, Bond does not have documentation that pinpoints the gravesite’s exact location.

As to placing a marker on the grounds, she said: “From the company’s point of view, if there was evidence that showed that to be the case, of course it would be considered, but at this point there is nothing like that. But to ask any landowner to put a marker that indicates a grave where you don’t know a grave exists does not seem appropriate or respectful of the people they are trying to name there.”

Of the roughly 60 Japanese troops who were killed or lost during the Dec. 7 attack, many were buried in various cemeteries on Oahu but were repatriated after the war. About 30 Japanese remain missing from that day.

One notable memorial to a Japanese airman stands in Marine Corps Base Hawaii in Kaneohe Bay on Oahu. A bronze plaque marks the spot where Lt. Fusata Iita, commander of the 3rd Aircraft Group of the Japanese Imperial Navy, crashed his plane on a hillside near Kansas Tower that morning. Iita’s body was long ago returned to Japan.

The defense attache with the Japan consulate in Honolulu said the case of the two Ewa airmen is “a difficult situation” for Japan because the site is private property and the owner says there’s no evidence to back up Bond’s assertion.

During the past few years, Bond and a group of historians specializing in the 1941 attack have gathered extensive documentation and photos about the crash site, which had been lost to time and land development.

Even Tom Dye, the archaeologist contracted by Haseko to monitor its land development, admitted that Bond and his colleagues have “done an incredible amount of work” in tracking down photos and accounts of the crash.

“They’ve found much more than I think anybody could have expected about this crash event,” Dye said. “But there’s just nothing yet that gets us a location that we could narrow things down and really make a concerted effort to look for a burial.”

Comparing old photographs and military reports from the time of the attack, Bond said he has calculated the crash site lies within a 50-yard radius of the golf course’s club house.

A Dec. 9, 1941, report by Capt. Lester Milz, with the 251st Coastal Artillery, noted that the badly burned bodies of two Japanese crewmen had been found and his men disposed of the remains. Two days a later, an Army staff officer visited Milz’s battery and wrote in his diary that he’d been told the airmen’s bodies had been buried in a “coral grave.”

“I knew they buried them in a sinkhole because that’s what we have out here,” Bond said of Ewa Plain, which is an ancient limestone field. “You don’t dig easily in this ground. It’s like concrete.”

Bond contends that burying bodies beside crash sites was common in that era.

“If you had a crash and couldn’t extract the people out, you just buried them by the plane,” he said.

Dye said that even if the exact crash site is pinpointed, there’s no direct evidence indicating where the bodies were buried.

“You really just have to guess at that point,” Dye said. “Mr. Bond perhaps is comfortable with guessing, but you’re not supposed to guess. We really don’t have any credible evidence to lead us to a place where we could productively search for remains of the two airmen.”

Bond suggested that ground-penetrating sonar could be used to detect the grave.

“GPR has highly evolved in the last few years,” he said. “They’ve used it on archaeological sites to find tombs. It will detect these sinkholes. It’s also used in old cemeteries.”

Dye, however, said that limestone subsurface is “a nightmare scenario for ground-penetrating sonar.”

“The problem you have with ground-penetrating radar is there are just a huge number of false positives,” Dye said. “You’d have to dig every single one of them up to find out what they were. It’s not specific enough to tell you, oh, that’s bone versus that’s a rock or that’s a root.”

Bond has written a request to the Joint POW/MIA Accounting Command, which is tasked with locating and retrieving the remains of U.S. servicemembers lost overseas, requesting that it take an active role in searching for the grave.

“Getting involved in another nation’s recovery event is not something we’d typically do unless it was in the course of one of our own investigations,” JPAC spokesman Lee Tucker said. The agency has in the past provided research assistance to the Japan Ministry of Health, Labor and Welfare’s Social Welfare and War Victims Bureau, which oversees such recoveries.

Tucker said the Japanese government did not require JPAC’s assistance or approval in searching for remains in Hawaii.

But Takeshi Ogino, the defense attache at the Japan consulate in Honolulu, said Japan did not have a comparable agency such as JPAC to research and retrieve MIA remains in foreign countries. He said the consulate had not received an “official request” from either Bond or the Haseko group in regard to searching for the airmen’s grave or commemorating the crash site.

Haseko’s Tam said that if Bond produces “additional information and evidence that we can authenticate,” the company might consider further search.

But Bond contends that the time to actively search and recover the remains is now, as the 73rd anniversary of the attack nears.

“If a decent search was done they could be found,” he said.