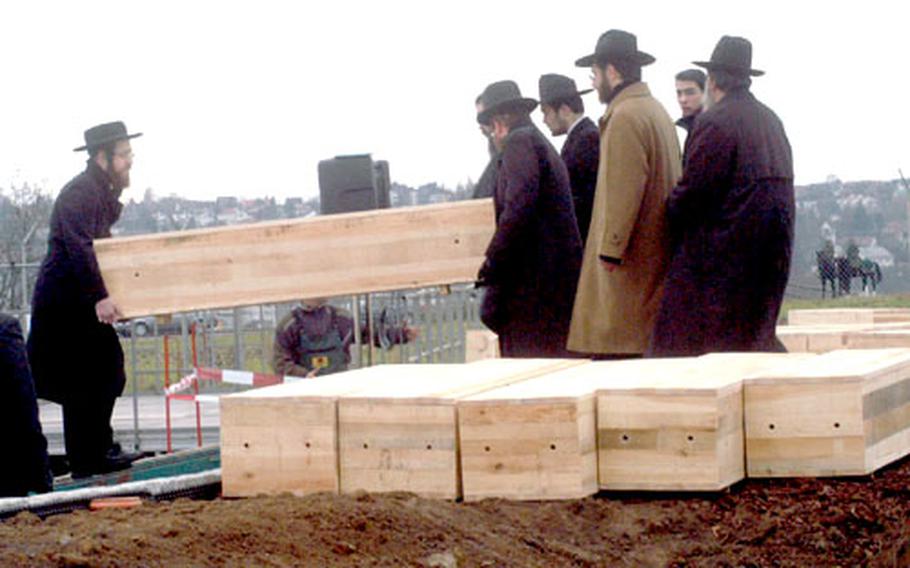 Rabbis carry coffins containing the remains of Holocaust victims that were discovered in September at Stuttgart Army Airfield. The 34 set of remains were reburied Thursday just inside the main security gate. About 500 people attended the funeral. (Charlie Coon / S&S)

Rabbis carry coffins containing the remains of Holocaust victims that were discovered in September at Stuttgart Army Airfield. The 34 set of remains were reburied Thursday just inside the main security gate. About 500 people attended the funeral. (Charlie Coon / S&S) 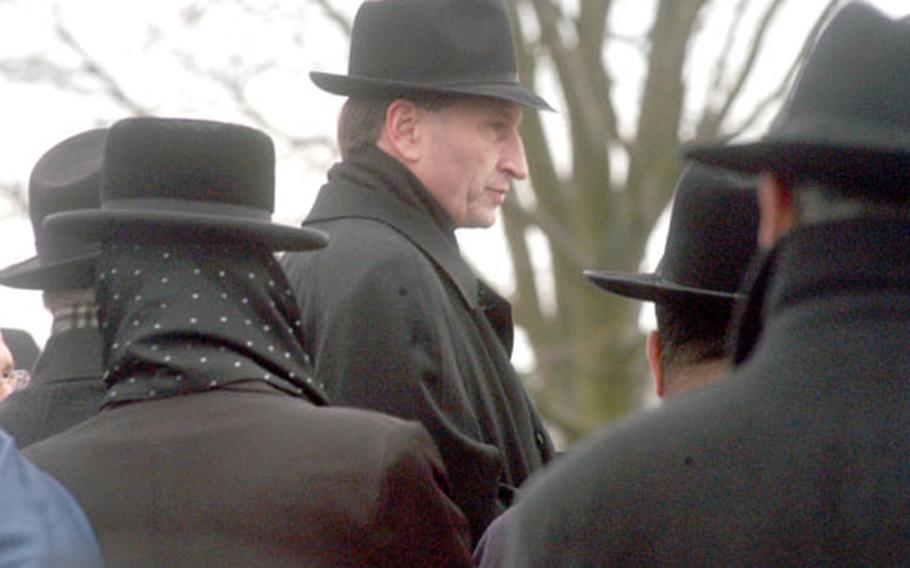 His voice boomed through speakers over the assembled mourners. Lau chidingly exclaimed how Iran&#8217;s president called the Holocaust a myth.

&#8220;I have to invite him to Stuttgart today,&#8221; Lau said of Iranian President Mahmoud Ahmadinejad.

The remains of 34 Holocaust victims were reburied Thursday at Stuttgart Army Airfield on a cold, drizzly afternoon, three months after they were discovered. About 500 people attended the funeral.

At the end of the two-hour ceremony, heavy equipment pushed dirt on top of the four large holes just inside the main security gate at the airfield, concluding weeks of debate between German and Jewish leaders on what to do with the remains.

German prosecutors initially wanted to examine the remains for evidence while they were stored at a Stuttgart hospital, but the Jewish leaders&#8217; wishes prevailed, and the bodies were returned as unbothered as possible to their resting place.

The pine boxes were numbered and each of the remains was placed as close as possible to where they were found. Formal gravestones would be placed over each at a later date, according to Rabbi Levi Matusof of the Brussels, Belgium-based Rabbinical Center of Europe.

The remains were discovered Sept. 19-20 by contractors excavating for a drainage project just inside the airfield&#8217;s main security gate.

The airfield is adjacent to the Stuttgart International Airport, just south of the city. It is used by the U.S. military for transporting troops, cargo and VIPs. The Stuttgart military community mail depository is also there, as is a German police helicopter unit.

Before the funeral, the coffins were brought to the airfield and laid out by a burial team of about 20 rabbis from London, Belgium and Israel. One held a map and directed the others, who carried the boxes to near where they would be interred.

Two buses pulled up outside the gate, and mourners filed out and through the security checks to the gravesite.

About 25 reporters and photographers attended the funeral and were thanked for coming. Most assembled on a platform adjacent to the gravesite, giving them ample opportunity to record the event.

A large contingent of German police in green trench coats and hats, as well as U.S. military police and contracted security guards, warily scanned for trouble.

A number of rabbis, as well as Guenther H. Oettinger, the minister president of the German state of Baden-W&#252;rttemberg, took turns speaking, mostly in German. On several occasions, their words were drowned out by the roar of a jet taking off into the thick, gray sky.

No members of the U.S. military addressed the crowd.

Several Germans in the crowd said they came to witness history.

Ulrich Bartels of Leinfelden-Echterdingen said he used to argue with his parents, who were young adults during World War II, about why they didn&#8217;t do more to fight the Nazi regime.

A number of young Jewish people came to fulfill one of their mitzvahs, or commandments.