Remains of 3 Marines killed in Osprey crash near Australia recovered 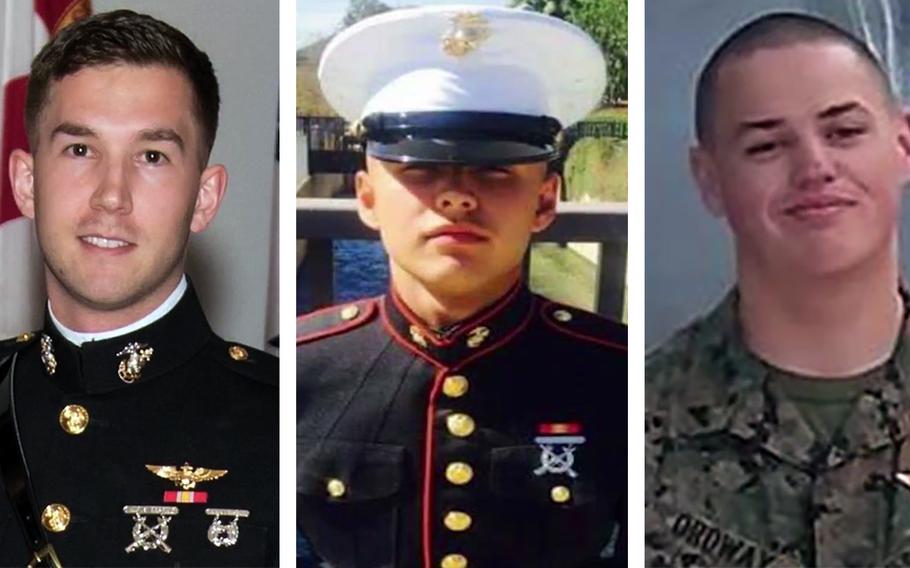 WASHINGTON – The remains of three Marines killed in the crash of a MV-22 Osprey off Australia’s coast earlier this month have been recovered, the Marine Corps announced Friday.

The bodies of Capt. Benjamin R. Cross, Cpl. Nathaniel F. Ordway and Lance Cpl. Ruben P. Velasco were recovered from the crashed tilt-rotor aircraft and will soon be returned to their families, according to a statement from the Japan-based III Marine Expeditionary Force.

Ordway’s and Velasco’s remains have been transferred to Hickam Air Force Base in Hawaii. Cross’ remains, which were recovered more recently, will be sent to the base “as expediently as possible,” according to the statement. From there, they will be transported to a final destination to be determined by their families.

The Marines were trapped inside the doomed Osprey after it struck the deck of a Navy amphibious transport dock and crashed into the water about 18 miles off the coast of the Shoalwater Bay Training Area in Queensland during a training exercise. Twenty-three Marines aboard the Osprey were rescued.

Salvage operations are ongoing as is an investigation into the cause of the crash, the Marine Corps said.

Cross, 26, was posthumously promoted to captain. He was an Osprey pilot from Maine who commissioned into the Marine Corps after graduating from Virginia Military Institute in 2013. He had been stationed in Okinawa with the Marine Medium Tiltrotor Squadron 265 for about a year.

Ordway, 21, was a crew chief also assigned to Marine Medium Tiltrotor Squadron 265. He was from Sedgwick, Kansas.

Velasco was posthumously promoted to lance corporal. He was a 19-year-old artilleryman assigned to Battery G, Battalion Landing Team, 3rd Battalion, 5th Marines. He was on his first oversees assignment after joining the Marine Corps following his graduation from West Covina High School in California in May 2016.

“We ask that you keep the families and friends of these Marines in your thoughts and prayers,” the Marine Corps statement read.