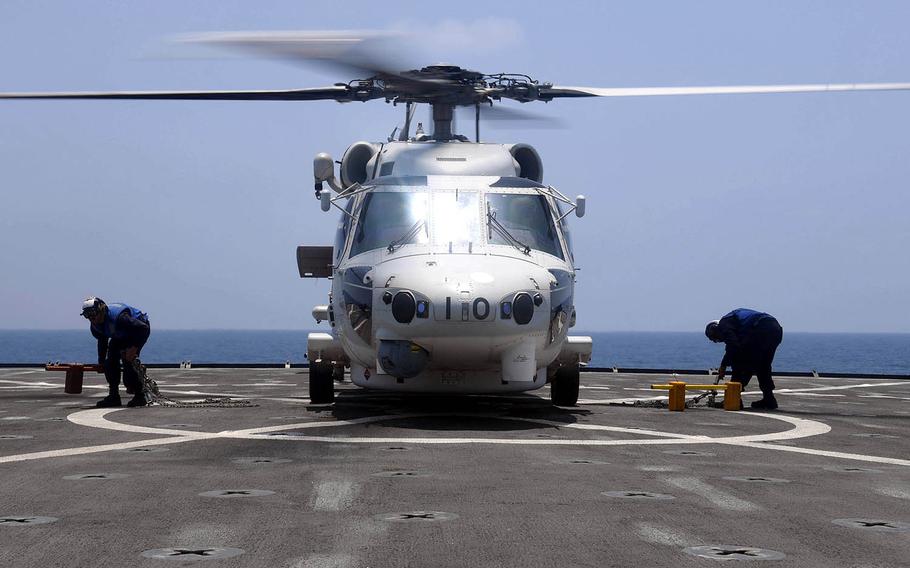 CAMP FOSTER, Okinawa — The remains of two Japanese aviators have been recovered from a SH-60J Seahawk helicopter that crashed into the Sea of Japan on Aug. 26.

The wreckage of the Japan Maritime Self-Defense Force aircraft — which was conducting nighttime take-off and landing drills when it crashed about 50 miles off Tappizaki, Aomori Prefecture — was raised from the seafloor on Thursday evening, a service spokesman said.

Inside, investigators found the remains of pilot Lt. Cmdr. Yuki Sato, 36, and co-pilot Ens. Hiroaki Tajima, 24. The remains of aerial navigator Petty Officer 2nd Class Hiroki Uchino, 36, have not been found, the spokesman said. One member of the four-person crew was plucked from the sea alive after the crash.

Search-and-rescue efforts have now been called off.

Human error was the likely cause of the crash, Japanese officials have said.

The wreckage was discovered Oct. 16 in 8,530 feet of water by a private company using an unmanned underwater vehicle.

The Japan Air Self-Defense Force is also searching for four crew members missing after a UH-60J helicopter crashed at sea during training on Oct. 17 about 20 miles south of Hamamatsu Air Base in Shizuoka Prefecture. Officials have said they are considering using the same unmanned underwater vehicle to find the second helicopter.

Stars and Stripes reporter Ken Kuniyoshi contributed to this report.