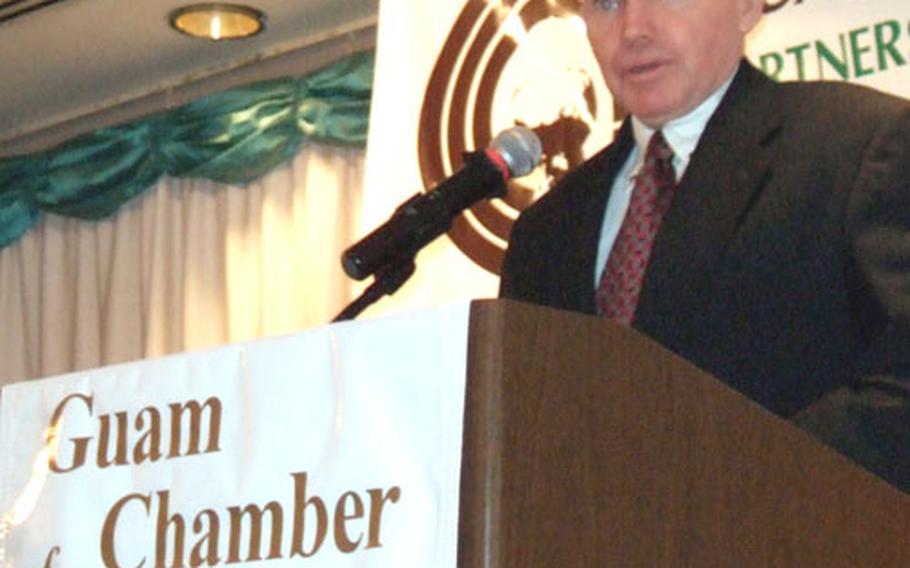 The head of the office that will oversee the relocation of 8,000 Marines stressed to Guam leaders during a five-day visit that he would work closely with the local community.

&#8220;There are no secrets,&#8221; said retired Marine Corps Maj. Gen. David Bice on Tuesday while addressing the Guam Governor&#8217;s Military Civilian Task Force, which deals with issues related to the realignment. &#8220;We want you as members of our team.&#8221;

Bice and B.J. Penn, assistant secretary of the Navy for installations and environment, who earlier this month named Bice to head the Joint Guam Program Office, kicked off the visit Friday by talking to the Guam Chamber of Commerce.

Penn told the group the realignment to Guam &#8212; which, as currently planned, will see $10 billion to $14 billion spent to move 8,000 to 12,000 servicemembers and their families to the island &#8212; is among the largest projects DOD has ever attempted.

Bice emphasized a desire to work with the Guam community so that the realignment will be beneficial to the military and to the community.

He indicated a desire to help Guam train local workers and to facilitate industry and small-business forums on accessing the job and business opportunities that will accompany the buildup.

&#8220;We&#8217;ll be talking to the Guam public service directors and their engineers about what we can get from them and what they can expect from us,&#8221; he said. &#8220;We want to team with the public services here in Guam. We don&#8217;t want to build this stuff inside the fence line on Department of Defense land.

The Marines relocation is slated to be completed by 2014 as agreed by the governments of the United States and Japan. Penn and Bice said that&#8217;s still their goal, but made mention that construction can only begin after an environmental study is completed.

The study is expected to begin Feb. 1 with the release of a National Environmental Policy Act notice of intent by Bice&#8217;s office.