Relocation off Aviano next after hare-raising roundup A few hundred volunteers of all ages walked along in a sometimes ragged line Thursday, trying to herd rabbits living near the runway at Aviano Air Base, Italy, into nets. (Kent Harris / S&S)

A few hundred volunteers of all ages walked along in a sometimes ragged line Thursday, trying to herd rabbits living near the runway at Aviano Air Base, Italy, into nets. (Kent Harris / S&S) 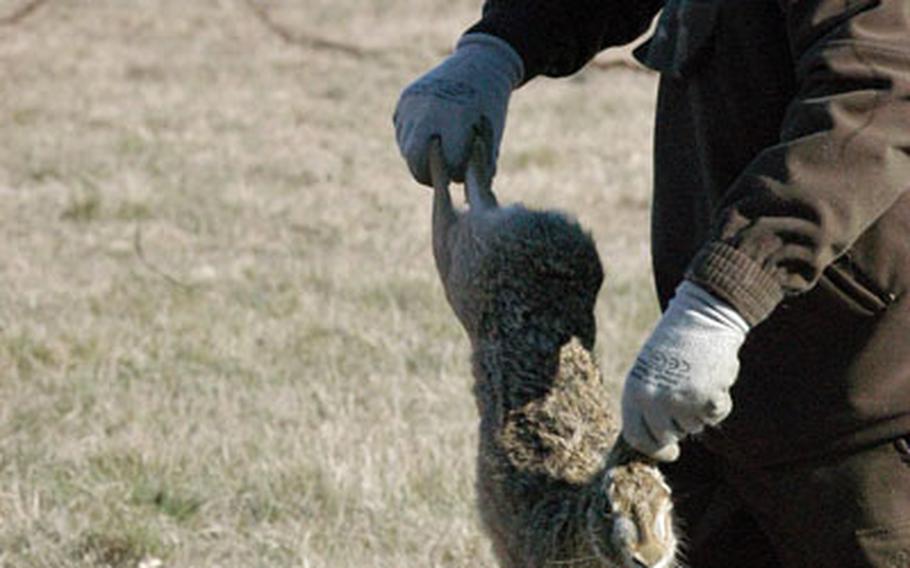 Massimo Scussat, an Italian park ranger, carries a rabbit captured during a roundup Thursday at Aviano Air Base. About two dozen rabbits were captured. All of them were to be released in locations outside the base perimeter. (Kent Harris / S&S) Participants in the rabbit roundup at Aviano Air Base, Italy, were told to wear bright clothing or bring something to make noise. David Rieker, 5, and Ellie Thompson, 2, chose to bring along some lids and bang them together. Megan Rieker, left, was probably going to have a quiet afternoon, because the kids looked a little tired at the end of the walk. (Kent Harris / S&S)

Actually, Elmer Fudd could have learned a lesson or two from a few hundred Italian and American volunteers who helped capture about two dozen &#8220;wascally wabbits&#8221; during a roundup Thursday on base.

Another lesson: Don&#8217;t be &#8220;vewy, vewy quiet.&#8221; Make a lot of noise. And wear bright clothing. The idea wasn&#8217;t to sneak up on the critters. Rather, it was to make them run. And run, until they made their way into a long net strung across the runway by members of the guardia forestale &#8212; the American equivalent of park rangers. The forestale are experts at such endeavors and carefully extracted the animals from the net and put them into cages. They were then going to release them in areas off base.

The game plan worked, sort of. The line got a bit ragged at times. And it probably could have used a few hundred more volunteers. And maybe some really scary people. The rabbits all ran toward the net at first, but then about half of them decided to make a break for it. One at a time. Many succeeded, despite the best attempts to scare them back toward the net.

Lehto said the rabbits needed to be captured, because they pose potential dangers to themselves, the fighter wing&#8217;s fleet of F-16 jets and motorists who drive along the base perimeter.

They also multiply quickly, especially on base where they don&#8217;t have any natural predators. Lehto said such roundups are held every few years to try to keep the population at a minimum.

A basewide e-mail asked for about 200 volunteers and got a little more than that. Many of them were making their first hunts.

&#8220;Watch how much noise I&#8217;m making,&#8221; said David Rieker, 5, banging two pot lids together like cymbals along with an even younger volunteer, Ellie Thompson, 2. The kids got a little tired by the end of the event, which lasted about 90 minutes and netted 20 bunnies.

Many of the critters weren&#8217;t happy, squealing as the Italian rangers carefully untangled them and put them into cages.

Participants then boarded buses and walked south from the north part of the runway. The rabbits there must have been watching across the net, because many ran to safety by sprinting past the edges of the extended line.