Religion’s not just for Sundays in Stuttgart 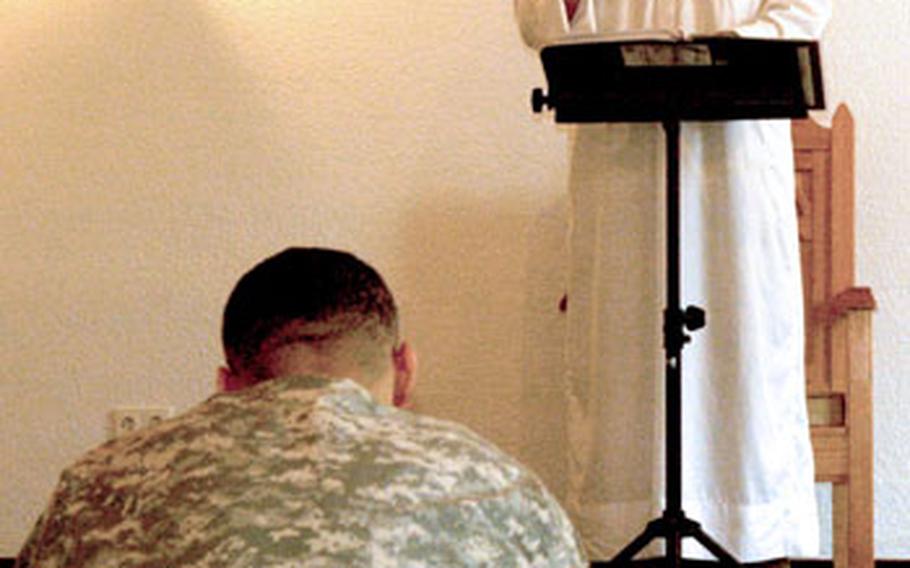 Chief Warrant Officer III Scott Weathersby, the Muslim lay leader for the Stuttgart community, leads weekly Friday services at the Panzer Kaserne Chapel. Religious programming has doubled in the past year in Stuttgart, where Col. Thomas Preston heads a team of eight chaplains, who on any given weekend lead 10 different worship services at the garrison&#39;s three chapels. (John Vandiver / S&S)

STUTTGART, Germany &#8212; Army Sgt. Peter Quinones has done a lot of studying on his own while trying to maintain his faith during his time overseas.

But last month, the Stuttgart-based soldier was able to attend his first Muslim service since being stationed in Europe, receiving instruction on the Quran from a new lay leader.

&#8220;I&#8217;ve never had this opportunity. I think something like this is pretty vital. It gets me a chance to come and learn more about my religion,&#8221; said Quinones following a service at the Panzer Kaserne Chapel.

Friday afternoon Muslim services started in February at the U.S. Army Garrison in Stuttgart. They represent one of the many new religious programs that have been added in the past 12 months on post. From daytime Bible study courses for spouses to Sunday services at Stuttgart&#8217;s more remote Robinson Barracks and financial management classes for young couples, programs doubled during 2008 as leaders looked for new ways to reach community members.

In the case of the Muslim services, it was a two-year search to find a qualified leader.

Indeed, during a time of tightening budgets, tapping into volunteers, sharing space for services and emphasizing programs that have a practical impact are imperative, according to Col. Doug Kinder, the new Installation Management Command chaplain for Europe.

&#8220;We have to be pretty creative. We&#8217;re living in a world where resources are scarce,&#8221; said Kinder, who during the past couple of months has been making site visits around Europe to gauge the needs of various installations.

With so much variety and demographic diversity from community to community, there can&#8217;t be a cookie-cutter approach, Kinder said. Rather, each installation needs to craft programs to fit their respective audiences.

But a trend that reaches across all the posts, regardless of the demographics, is the need to develop initiatives that extend beyond church walls and meet the day-to-day needs of military families, he said.

While in years past the main focus was on the Sunday service, that is just one part of the job for today&#8217;s chaplain. Seminars on &#8220;how not to marry a jerk,&#8221; suicide prevention awareness campaigns and initiatives to help couples deal with the strain of deployments are all areas where chaplains are now playing big roles, Kinder said.

But with all of the outreach, coupled with the strain of coping with deployments for many of the younger chaplains themselves, the corps of religious leaders is being somewhat stretched.