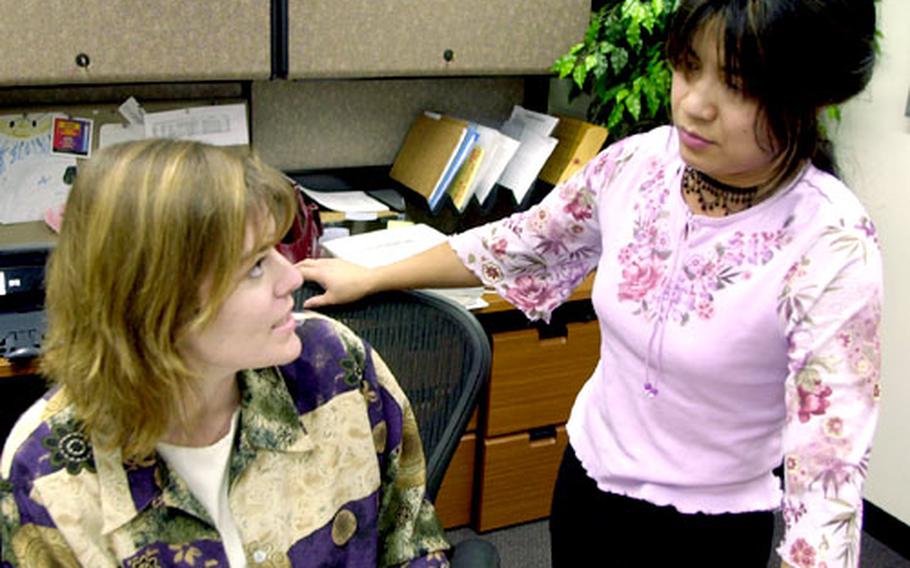 SASEBO NAVAL BASE, Japan &#8212; For 100 years, the Navy-Marine Corps Relief Society has been a financial safety net for servicemembers and their families.

A reception and birthday party is planned at 5 p.m. Friday at Harbor View Club. Base community members are welcome to attend, said Angel Person of the Sasebo branch relief society office.

A hundred years ago this Friday, 19 volunteers in Washington, D.C., began the society, according to organization literature. The organization officially changed its name in 1991 to Navy-Marine Corps Relief Society.

Through the first century, it provided more than $1 billion in interest-free loans and grants to more than 3 million active-duty and retired sailors, Marines and their families, organization literature shows. More than 3,000 volunteers serve the organization.

Person, 32, joined the Sasebo relief society team 2&#189; years ago as a volunteer. Six months later, when Sasebo branch director transferred with his wife to another duty station, she was offered the position. Person is the only paid staff member; volunteers make up most of the organization.

Person said &#8220;about 95 percent&#8221; of the assistance her branch provides is in the form of loans, followed by scholarships awarded as spouse tuition assistance.

Most years, she said, grants for emergency relief make up the smallest percentage of funds disbursed.

Tuition assistance is &#8220;only available overseas,&#8221; Person said, and is limited to $300 per semester and based on approximate full-time tuition.

Emergency grant amounts are more difficult to predict, she said. &#8220;Here in Sasebo there are times when we go for a short time without many people needing the assistance,&#8221; she said. &#8220;That seems to be because people in Sasebo are generally self-sufficient.&#8221;

Lyn Pipkin, wife of Chief Petty Officer John Pipkin of the minesweeper USS Guardian, volunteers at least 10 hours each week as chairman of the Sasebo office&#8217;s volunteer staff of six. All have been on board more than a year, including one for five years and another for seven.

&#8220;I enjoy the time I spend volunteering here because I like to feel like what I&#8217;m involved with is actually helping people in some meaningful way,&#8221; said Pipkin, the mother of Linmarie, 12, and Nicole, 6.

Her husband is master-at-arms Chief Petty Officer Chuck Person, and they have two children &#8212; son Sam, 11 and daughter Taylor, 10. The family leaves Sasebo in March for the chief&#8217;s new assignment at Atlanta Naval Air Station.

Person would like to see more people use the organization&#8217;s confidential budget counseling she and some of the specially trained volunteers perform.

For additional information on the organization, log onto www.nmcrs.org.

Here&#8217;s the breakdown for the disbursements (the total figure includes other assistance such as loans).

Here&#8217;s how the Sasebo figures break down, according to Connon and Sasebo Office Director Angel Person: