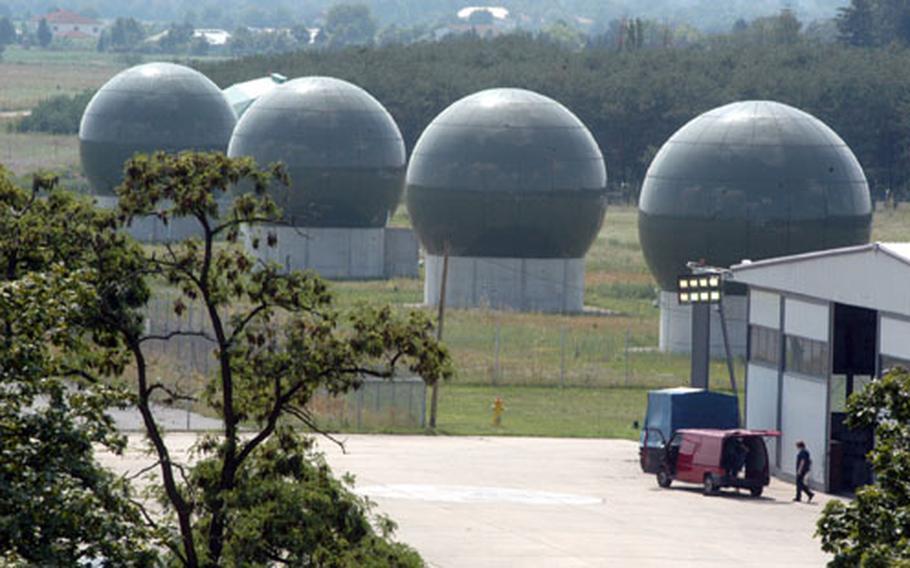 The communications relay station built on Darmstadt, Germany, property is located near a Griesheim housing area. Many inhabitants are concerned about radiation. (Peter Jaeger / S&S)

The communications relay station built on Darmstadt, Germany, property is located near a Griesheim housing area. Many inhabitants are concerned about radiation. (Peter Jaeger / S&S) 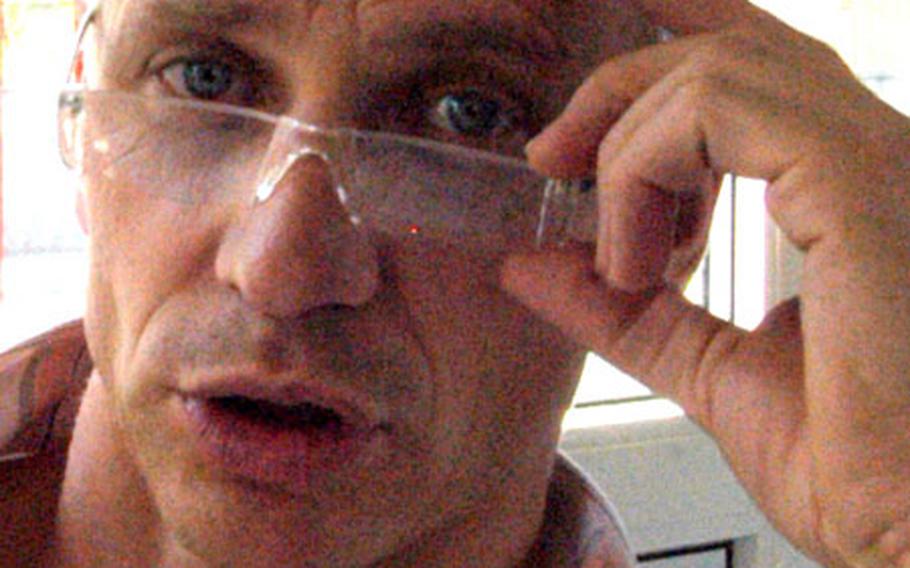 Wolfgang Sauer, owner of a diner near the American installation in Griesheim, Germany, gives his point of view about a communications relay station that recently went up in Griesheim. (Peter Jaeger / S&S) Norbert Leber, mayor of Griesheim, Germany, voices his concerns about an American communications relay station that was built near a Griesheim housing area and kindergarten. (Peter Jaeger / S&S)

GRIESHEIM, Germany &#8212; The woman backed up from the order window, warily, slowly, nearly backing into the cash register of her cigarette kiosk.

She didn&#8217;t know anything about the rise of the orbs, she said. She had no opinion on them, either.

Then she offered the same advice given by the nodding old man nursing a bottled beer beside the sidewalk: &#8220;Talk to the police.&#8221;

Griesheim is home to 25,000 people, a dozing main street of dormered shops and an annual festival in praise of the onion. It also now sits next to Project ICEbox, a U.S. military communications station set to go online at full capability sometime next month.

The Improved Collection Equipment, with polished green globes like plump olives, has caused both paranoid murmurs and outright indignation since the announcement last year of their arrival.

They read our e-mail and tap our telephones, some residents say. The mayor wonders whether they spy on German industry. Young parents who feel they live too close to the orbs are selling their homes, fearing radiation and mutation.

Rita Capodiferro, a neighbor who belongs to a citizens&#8217; movement opposed to the orbs, worries her neighborhood will become a target of al-Qaida. The town hall has already logged 1,700 signatures opposing the project, and Capodiferro said her group has since gotten about 3,000 more.

Activists have distributed leaflets announcing &#8220;Big Brother is Watching You&#8221; and accusing the orbs of working for the &#8220;STASI of the free world,&#8221; a reference to East Germany&#8217;s notorious domestic spy net.

The relay has been operating since May with some temporary mobile components. Town officials say the military has told them the site would be fully operational with permanent equipment next month.

The U.S. military announced it would erect the relay last year as part of its move of intelligence assets from the Bad Aibling area in Bavaria.

But though the relay moved from Bavaria along with the Army&#8217;s 66th Military Intelligence Group, that unit&#8217;s deputy commander said the orbs aren&#8217;t his. Instead, Lt. Col. Allan Coville directed calls to U.S. Navy Europe in London, which staffs the relay.

There, Lt. Cmdr. Terrence Dudley said the orbs pose no threat, despite their B-movie, lunar-outpost look.

However, as to what the relays do exactly, Dudley said he couldn&#8217;t say.

Locals believe the relay supplies data to the National Security Agency, the intelligence brains specializing in encrypting American secrets and listening in on foreign chatter.

The NSA&#8217;s headquarters at Fort Meade, Md., would not comment.

Opponents accuse the NSA of snooping via Echelon, an automated network not acknowledged by the United States but purportedly run by it and Australia, Britain, Canada and New Zealand. The system allegedly scans not only e-mail and telephone conversations but even faxes, looking for flags and filtering them via artificial intelligence. If Echelon discovers a threat, the message or call in question is supposedly referred to a human.

The European Parliament has issued reports concluding that Echelon is real, and suggesting that it targets civilian and commercial traffic. The parliament even encouraged Europeans to encrypt their e-mails.

That sort of PR is the reason protesters frequently target the joint communications center at Menwith Hill, England, which Germans believe is sister to their new orbs.

Griesheim&#8217;s mayor, Norbert Leber, doesn&#8217;t believe the relay is radioactive. But he means to find out.

Leber wishes the military had asked him before selecting the rural airfield. Though the field borders homes and even a kindergarten in Griesheim, it technically lies within the limits of the neighboring city of Darmstadt. Leber said he never wanted to stop the relay, but preferred a more isolated spot in Griesheim, away from houses.

Leber wonders, though, whether the relay engages in industrial espionage.

The NSA has previously denied it engages in commercial spying.

Whatever the case, residents complain that the military isn&#8217;t telling them anything.

Several neighbors have sold their homes, she said. Now she wants to sell hers.

Capodiferro also complained that the relay is about 200 yards from a kindergarten.

A woman married to a U.S. soldier staying in nearby military housing said she hadn&#8217;t even heard of the hubbub.

One of her German neighbors remains spooked.

The owner of a nearby shoe box of a greasy spoon, slot machines blinking and blooping in the background, was unfazed.

But one employee was worried about Griesheim&#8217;s new notoriety.

Despite the Orwellian angst, Capodiferro said she&#8217;s not against the Americans. She has fond memories of visiting a U.S. base as a young girl, gasping at fireworks on the Fourth of July. She said her anti-globes group even kicked out an anti-American activist.

She nonetheless wants the ICE to melt away, though she thinks those orbs have landed for good.