Relaxing day for GIs on historic day in Iraq 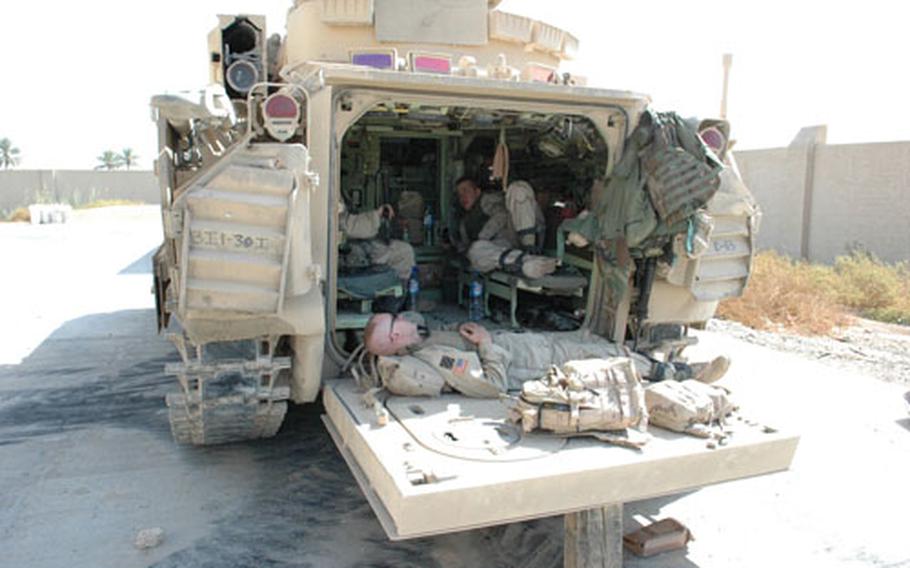 Soldiers from Company C of Task Force 1-30 relax on Saturday outside Muqdadiyah, where little violence was reported during the constitutional referendum vote. (Andrew Tilghman / S&S)

MUQDADIYAH, Iraq &#8212; On the election day in January, this city center was a snapshot of open warfare: insurgents unleashed rocket-propelled grenades from a nearby palm grove, a U.S. tank rolled through the streets returning fire, and several polling sites were shut down amid the violence.

For Saturday&#8217;s constitutional referendum, however, the city &#8212; with a sectarian mix of Shiites and Sunnis that mirrors the country at large &#8212; largely was quiet and most U.S. troops here stood by passively as more than 70,000 Iraqis reportedly turned out to vote.

&#8220;It&#8217;s a big, big, huge difference,&#8221; said Mike Saad, an Army translator from New Jersey who has worked here since July 2004 and recalled the violence that overshadowed the last election day.

The relatively quiet election day Saturday followed two nights of fatal violence. Four Iraqi police and two Iraqi army soldiers were killed in an nighttime attack on a polling site and a bombing.

Insurgents attacked six polling sites during the nights leading up to the vote. Iraqi police and Iraqi soldiers fended off the assaults, U.S. soldiers said.

Iraqi police and the Iraqi army handled nearly all security problems, including the six nighttime attacks on poll sites. While U.S. troops monitored the situations, they withheld direct involvement.

U.S. soldiers deliberately avoided making any visible appearance at the 63 polling sites in the Muqdadiyah region, aiming to avoid any suggestion that the military was unduly influencing the balloting process. By midafternoon Saturday, Iraqi election officials reported that more than 70,000 of the area&#8217;s roughly 120,000 registered voters had come to the polls.

Soldiers were instructed to allow local forces to handle outbreaks of violence, leaving U.S. troops as backup for large-scale problems. As of Saturday afternoon, U.S. troops had not responded to any incidents on election day in Muqdadiyah.

Staff Sgt. Mitch Court, a 26-year-old father of three and native of Ohio, spent much of the day perched in the gunner&#8217;s seat of a Humvee patrolling the rural roadways, where he encountered little beyond an occasional car violating the vehicle ban.

Dozens of soldiers assigned to quick response teams appeared relaxed and idle, eating Meals, Ready to Eat, smoking cigarettes or chewing tobacco, as they waited at temporary outposts set up this week in preparation for the vote.

The soldiers from Task Force 1-30, who could leave Iraq as early as January, said the outcome of the vote would have little direct impact on their day-to-day assignments. At the same time, they viewed the referendum as a barometer for the tone of their final months here.

In the city center, U.S. troops set up a temporary command post alongside Iraqi police, firemen and city officials. There they monitored reports from police and polling sites and prepared to respond in case of emergency.

Election-day problems were mostly limited to two roadside bombs that were removed before exploding, and reports of gunshots at one polling site, U.S. troops said.

At one rural fruit stand outside the city, a group of several men stood in the midday sun and complained about the vehicle ban as they waited for a bus to take them to the nearest polling site nearly four miles away.

Among them was Saad Mahdi, a 42-year-old unemployed Sunni and father of six, who said he was eager to get to the polls and vote against the constitution. He criticized the U.S. troops in his hometown, but also said the referendum was a positive development.

&#8220;As long as the Americans are standing on my head and restricting my movement, this will not be a real election,&#8221; he said through a U.S. Army interpreter. &#8220;But as long as we have the opportunity to express our opinion, it is a step in the right direction.&#8221;