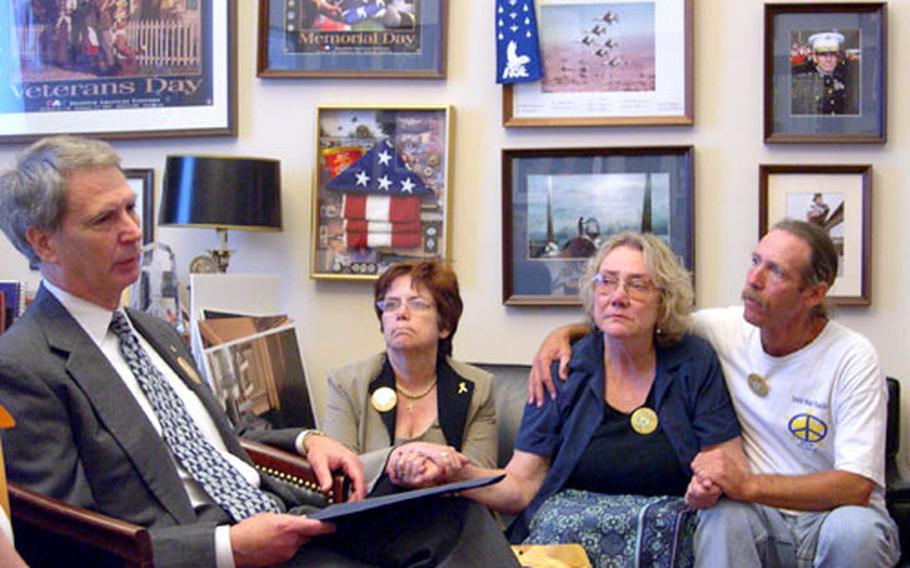 Rep. Walter Jones, R-N.C., left, speaks to members of Military Families Speak Out about his experience at a soldier’s funeral last month. With him are, from left, Dianne Davis Santorello, Celeste Zappala and Bill Mitchell. All three had a son killed serving in Iraq. (Leo Shane III / S&S)

Rep. Walter Jones, R-N.C., left, speaks to members of Military Families Speak Out about his experience at a soldier’s funeral last month. With him are, from left, Dianne Davis Santorello, Celeste Zappala and Bill Mitchell. All three had a son killed serving in Iraq. (Leo Shane III / S&S) 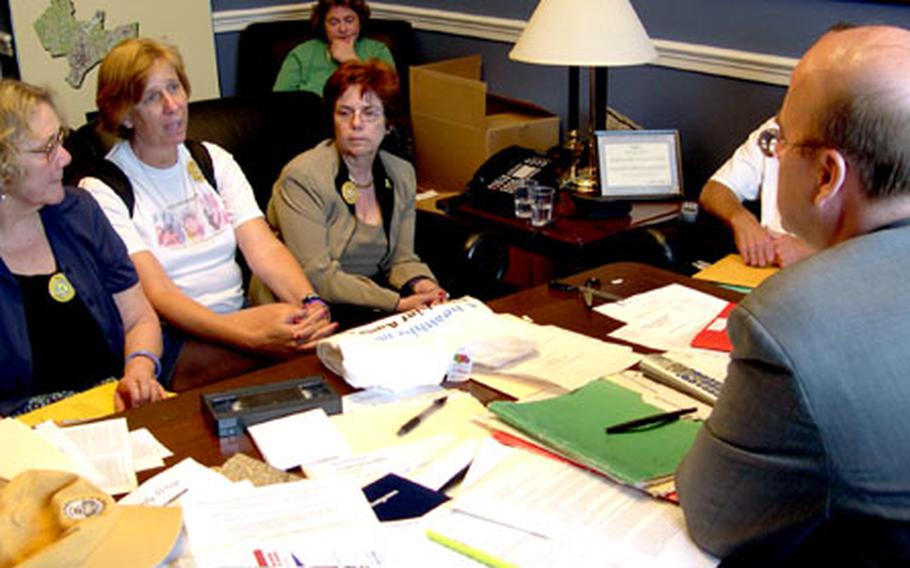 WASHINGTON &#8212; Several parents of soldiers killed in Iraq visited Capitol Hill on Wednesday to ask for congressional hearings on the Downing Street memo, which one mother called President Bush&#8217;s &#8220;Watergate.&#8221;

Critics say the document, which contains minutes from a meeting in July 2002 between British Prime Minister Tony Blair and top aides, shows that Bush was determined to go to war with Iraq and ignored evidence that showed the country had no weapons of mass destruction.

&#8220;Military action was now seen as inevitable,&#8221; the memo reads. &#8220;Bush wanted to remove Saddam, through military action, justified by the conjunction of terrorism and WMD. But the intelligence and facts were being fixed around the policy.&#8221;

The memo was first revealed by the Sunday Times of London in May. Earlier this month, both Bush and Blair dismissed the accusations, saying that the war in Iraq was justified because Saddam Hussein was ignoring international law.

But members of Military Families Speak Out, whose members are relatives of troops killed in Iraq, said Congress must investigate whether the president lied to the country to justify military action.

&#8220;This war was based on lies and deception,&#8221; said Celeste Zappala of Philadelphia, whose son was killed in April 2004 while providing security for investigators searching for WMD. &#8220;The only way we can understand how we&#8217;ve come to this disastrous position is to find out what the truth is.&#8221;

The group, which has frequently criticized the administration, met with congressmen and left flyers petitioning for a full investigation at the offices of Republican House leaders.

She said the Downing Street memo would &#8220;bring down the house of cards&#8221; if lawmakers choose to investigate it, and compared it to the Watergate scandal which eventually forced President Richard Nixon from office.

The group also petitioned lawmakers to set a specific date for the full withdrawal of troops from Iraq. Rep. Walter Jones, R-N.C., and other Republicans who last month supported an unsuccessful measure to mandate an exit date were presented with a certificate of thanks from the group.

Jones, who plans to introduce similar legislation on Thursday, said he was &#8220;heartsick&#8221; at the families&#8217; loss and pledged to help them in their efforts.

Also on Thursday, Democrats have planned a meeting concerning the memo, to be followed by a rally outside the White House.