Relatives gather at scene of grisly slayings at Kabul hotel Afghan police officers stand guard outside a lakeside resort on the outskirts of Kabul, where militants launched an attack that ended Friday morning and killed 18 people, including 14 civilians. (Martin Kuz/Stars and Stripes)

Afghan police officers stand guard outside a lakeside resort on the outskirts of Kabul, where militants launched an attack that ended Friday morning and killed 18 people, including 14 civilians. (Martin Kuz/Stars and Stripes) 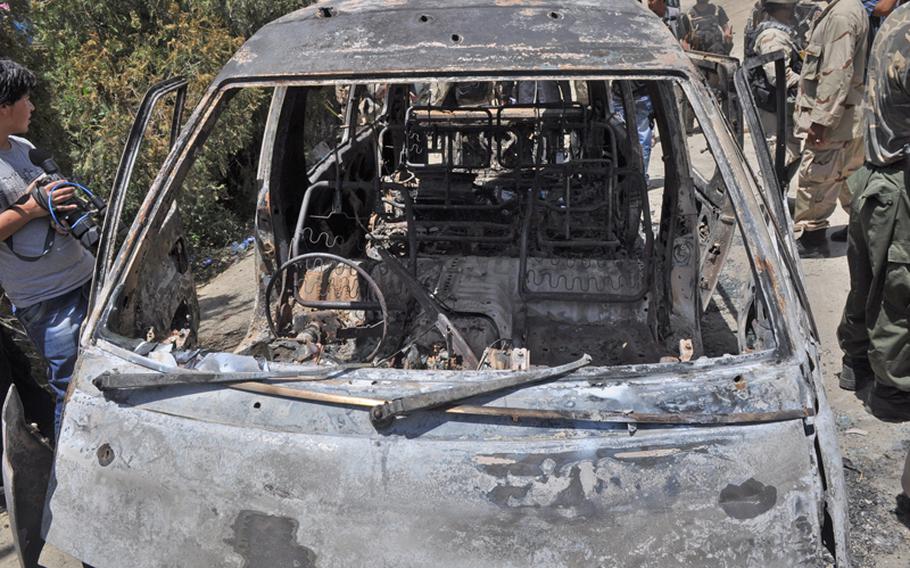 The charred remains of a minivan parked at a lakeside resort near Kabul, where a 12-hour siege by militants that ended Friday morning left 18 people dead, among them 14 civilians. (Martin Kuz/Stars and Stripes) 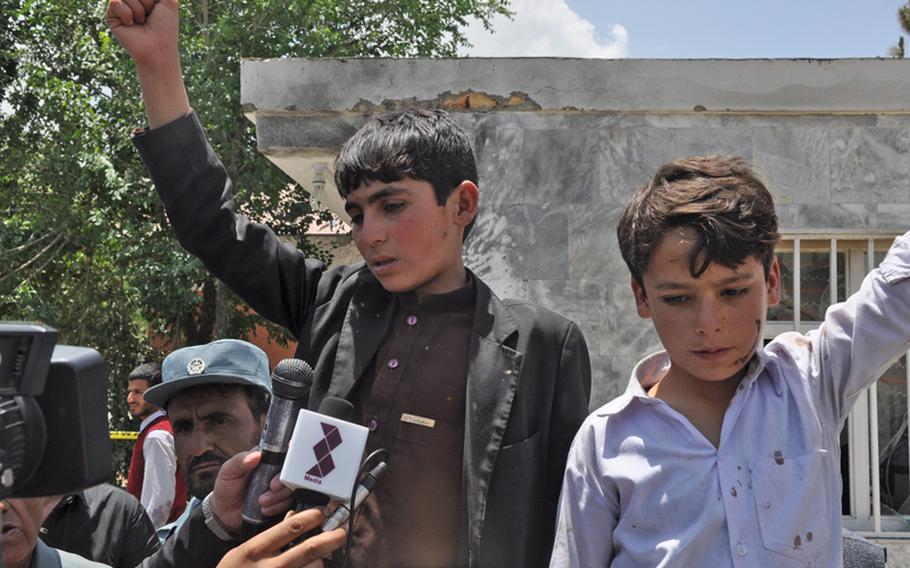 Two boys identified as hostages by Afghan security officials talk to reporters following the end of a 12-hour insurgent attack on a lakeside resort in Kabul that left 18 people dead. (Martin Kuz/Stars and Stripes) A boy identified as a hostage by Afghan security officials stands outside a lakeside resort on the outskirts of Kabul that was the scene of a 12-hour insurgent attack that left 18 people dead. (Martin Kuz/Stars and Stripes) 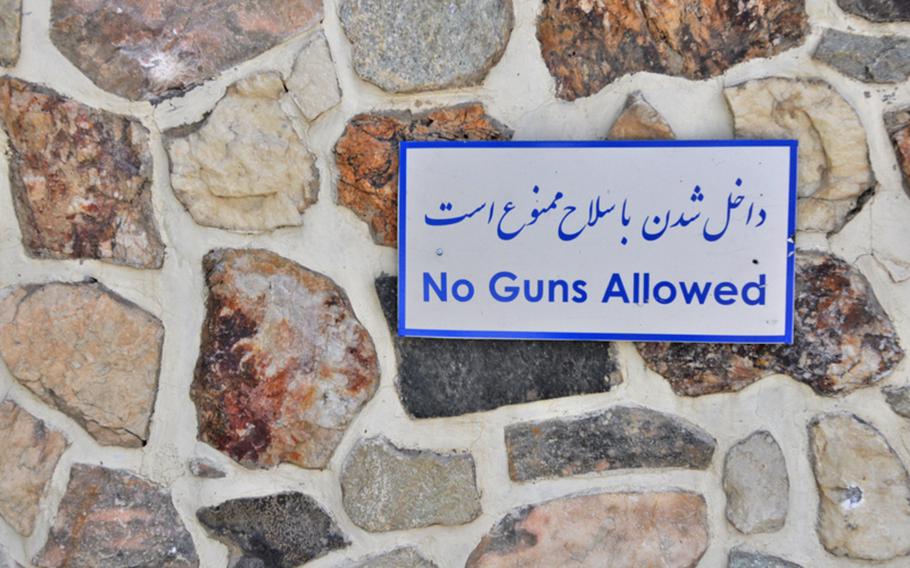 A sign outside a restaurant at a lakeside resort in Kabul where five armed militants staged a 12-hour attack that ended Friday morning. Eighteen people were killed in the ambush, including 14 civilians. (Martin Kuz/Stars and Stripes) The interior of a restaurant destroyed during a 12-hour attack launched by militants late Thursday night at a lakeside resort on the outskirts of Kabul. Afghan security forces killed the five insurgents, who had killed 18 people during the siege. (Martin Kuz/Stars and Stripes) The blood stain of a victim of an insurgent attack on a lakeside resort in Kabul that ended Friday morning with 18 people dead, including 14 civilians. (Martin Kuz/Stars and Stripes) 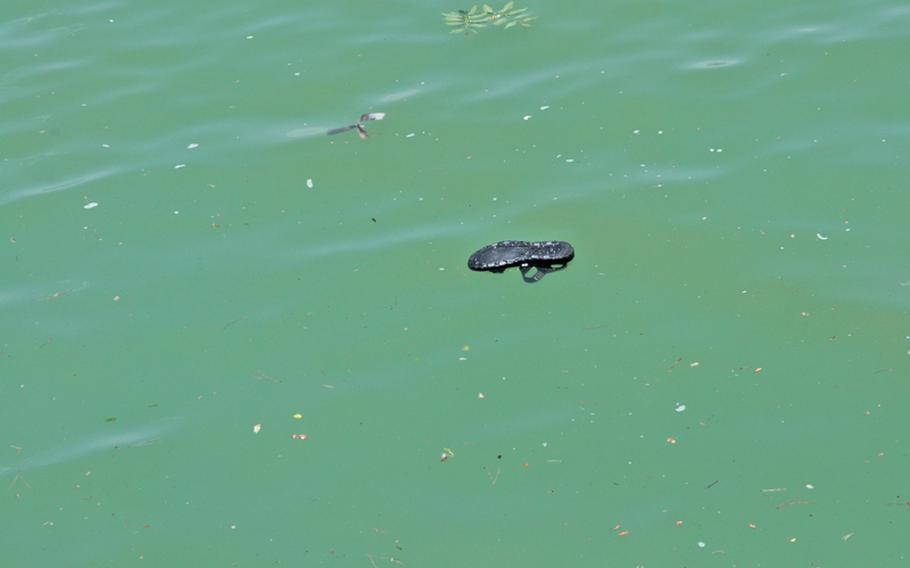 When insurgents attacked a lakeside resort in Kabul late Thursday, several guests jumped into the water to evade capture. The 12-hour siege left 18 people dead, among them 14 civilians. Afghan security forces killed the five militants involved in the assault. (Martin Kuz/Stars and Stripes) The body of one the five militants who staged a 12-hour siege on a lakeside resort on the outskirts of Kabul that ended Friday morning. Afghan security forces killed the five insurgents involved in the assault; the attackers killed 18 people. (Martin Kuz/Stars and Stripes) 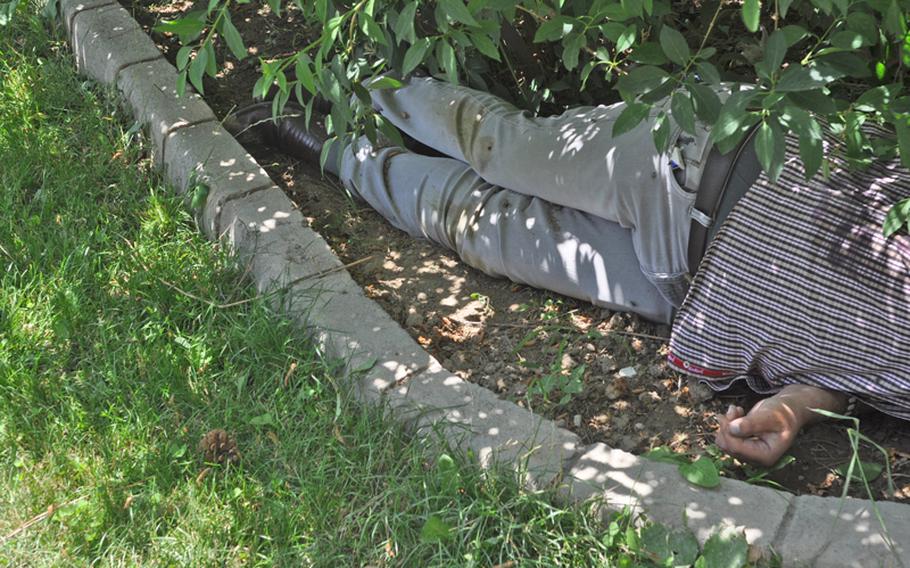 The body of a victim killed in an insurgent attack on a lakeside resort in Kabul that ended Friday morning with 18 people dead, among them 14 civilians. Afghan security forces killed the five militants involved in the 12-hour assault. (Martin Kuz/Stars and Stripes) White smoke rises from a lakeside resort on the outskirts of Kabul, where militants launched an attack late Thursday that killed 18 people, including 14 civilians. Afghan security forces killed the five insurgents involved in the 12-hour siege. (Martin Kuz/Stars and Stripes)

KABUL &mdash; The gunfire had subsided at a popular lakeside resort on this city&rsquo;s outskirts shortly before noon on Friday, replaced by the sobbing of those whose loved ones were among the 18 people killed in a grisly militant attack.

Fourteen civilians, three security guards and a police officer were gunned down during a 12-hour siege that began late Thursday at the Spozhmai resort and hotel on Qargha Lake.

Five men carrying rocket-propelled grenades and assault rifles and wearing armored vests stormed the resort, which sprawls among towering pine trees and mountains about 10 miles from Kabul&rsquo;s central district. It is a scenic, serene locale that, until this week, seemed beyond the reach of war.

The assailants shot and killed three security guards as they entered the hotel before firing on workers and patrons at the nearby Spugmay Restaurant, according to Afghan security officials. The hotel&rsquo;s manager was slain in the ambush.

One victim, perhaps 20 years old and wearing a red vest over a white dress shirt, lay on the hotel patio overlooking the lake. His blank eyes faced the sky and a large smear of blood outlined his lifeless form.

Arif Zahir, an 18-year-old Kabul resident who identified himself as the man&rsquo;s cousin, clutched his head and cried when he saw the body after Afghan security forces allowed relatives of the victims into the resort.

&ldquo;I speak not about this now,&rdquo; Zahir said in broken English. He moved away to briefly kneel beside the corpse before security officers carried it away on a stretcher.

After opening fire, the attackers took hundreds of hostages, many of them women and children, Afghan officials said. Several guests hopped a short iron fence along the edge of the resort&rsquo;s grounds and plunged into the water, seeking to avoid capture. Sandals could be seen floating in the lake hours after the assault ended.

Scores of officers with the Afghan National Police and soldiers responded to the scene before sunrise Friday and engaged in a firefight with the militants that ebbed and flowed for several hours.

By mid-morning, amid the crackle of automatic-rifle fire and the boom of RPGs, white and black smoke spiraled into the blue sky as U.S. military helicopters circled overhead.

The fighting stopped when security forces killed the last of the five militants, according to Ayoub Salangi, Kabul&rsquo;s police chief. He reported that security forces evacuated upward of 300 hostages during the early hours of the siege and later secured the release of 40 more.

The Taliban claimed responsibility for the assault. In a phone call Friday morning, Zabiullah Mujahid, the Islamist militia&rsquo;s spokesman, described the resort as rife with &ldquo;illicit fun and having wild parties.&rdquo;

He further contended that the resort, which includes several cottages and an amusement park with a Ferris wheel, attracts a large number of foreign visitors. Afghan officials disputed that assertion, characterizing the Spozhmai as a popular summer destination for families looking to escape Afghanistan&rsquo;s capital, with its 4 million people and temperatures that routinely top 90 degrees.

Hours after the hostage crisis ended, Gen. John Allen, NATO&rsquo;s commander in Afghanistan, released a statement that placed blame for the attack on a different militant group.

&ldquo;Afghan National Security Forces and coalition military sources acknowledge that this attack bears the signature of the Haqqani network, which continues to target and kill innocent Afghans and blatantly violate Afghan sovereignty from the safety of Pakistan,&rdquo; Allen said.

&ldquo;There is no doubt that innocent Afghan civilians were the intended targets of this unspeakably brutal attack,&rdquo; Allen added. &ldquo;&hellip;These atrocities should be condemned in the strongest of terms.&rdquo;

A gruesome scene awaited those who walked into the resort following the ambush. At least eight bodies were strewn inside the restaurant and across the surrounding grounds amid shattered glass, chunks of wall plaster and hundreds of automatic-rifle shell casings.

Two men lay tangled together on the ground next to an outdoor table that held plates of flat bread and French fries, with empty cans of Heineken near their feet and blood splotching their clothes.

Nearby, two men lay beneath the base of a hedge, as if they had hoped the thin branches might provide cover from the gunfire. Ten feet away was the blood-soaked corpse of a militant, an armored vest splayed on the ground above his head.

Lt. Col. Jimmie Cummings, a spokesman for the International Security Assistance Force in Kabul, said late Friday that Afghan security forces had responded to the attack with &ldquo;minimal support&rdquo; from ISAF, with the U.S.-led coalition providing air coverage and advisory teams.

The resort presented a relatively easy target for insurgents, who in the past year have struck closer to the capital&rsquo;s heavily fortified center. In April, militants launched coordinated assaults on several embassies, military bases and Afghan government buildings, killing eight Afghan soldiers and four civilians.

The siege of the Spozhmai marked the latest in a string of insurgent attacks across the country as summer warms up and the so-called &ldquo;fighting season&rdquo; intensifies.

On Wednesday, a suicide bomber in the eastern province of Khost killed 21 people, including three U.S. soldiers, and a roadside bombing in nearby Logar province left seven civilians dead.

To see the reporter's tweets on the attack, go to Twitter: @MartinKuzEmail: kuzm@estripes.osd.mil