Relatively untouched DMZ is home to a number of natural wonders 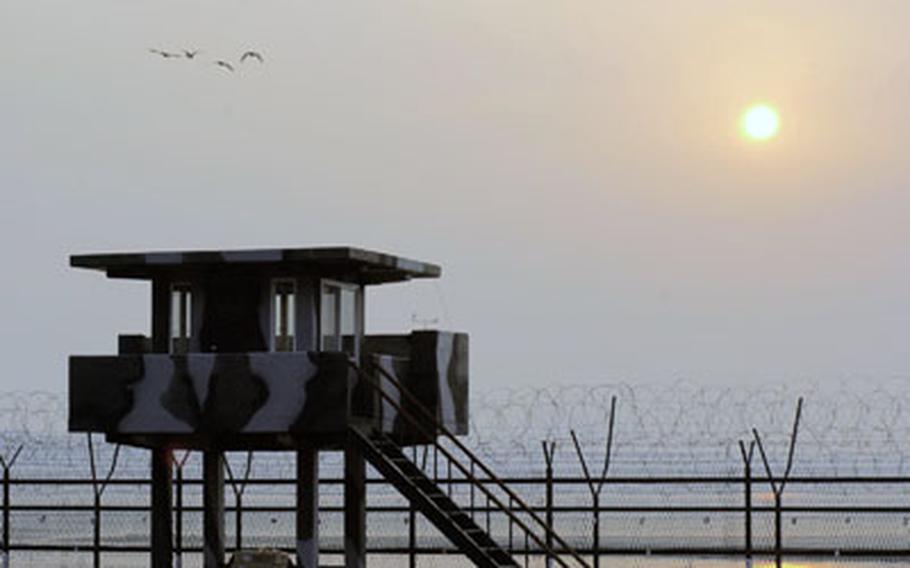 Buy Photo
Birds take flight over the Imjin River in Korea’s Demilitarized Zone, which has become a nature preserve of sorts thanks to the fact it has been left relatively untouched by man for more than 55 years. (Jon Rabiroff/Stars and Stripes)

Buy Photo
Birds take flight over the Imjin River in Korea’s Demilitarized Zone, which has become a nature preserve of sorts thanks to the fact it has been left relatively untouched by man for more than 55 years. (Jon Rabiroff/Stars and Stripes) Ecologist Jeon Seon-hee, crouching, talks about animal tracks with visitors during a recent eco-tour she led into the Civilian Control Zone, an area adjacent to Korea’s Demilitarized Zone. Jeon is one of many South Koreans already lobbying to keep the DMZ free of development in the event the Koreas someday reunify. ()

DEMILITARIZED ZONE, Korea &#8212; The water deer nibbled away on the vegetation on the gently sloping bend along the Imjin River, seemingly unaware of the dozen people pointing and staring at it through a field scope from the opposite shoreline.

Nearby, the group observed a family of white-naped cranes feeding, something the endangered species does when wintering in the relative solitude of the Demilitarized Zone that divides North and South Korea.

While mention of the DMZ conjures images of stone-faced soldiers, barbed-wire fences, guns and guard towers, the area between North and South Korea has remained virtually untouched by humans for more than 55 years.

As a result, the DMZ has essentially become a 2.5-mile-wide, 155-mile-long nature park that is home to more than 50 species of mammals, roughly 200 kinds of birds and in excess of 1,000 plant species. Some of the birds and animals that live or visit here are threatened or endangered.

Now a movement is under way to protect the natural wonders of the DMZ from perhaps their greatest threat &#8212; peace and the reunification of the peninsula.

Ecologist Jeon Seon-hee, who regularly leads eco-tours into the area, said the land is a one-of-a-kind treasure, serving as a "green belt" from coast to coast and including a variety of ecosystems &#8212; ocean fronts, rivers, wetlands, mountains, valleys and heavily wooded areas.

"What I realize from talking with visitors from all over the world is that we are all curious about the ecological features of this area," she said through an interpreter. "This is the kind of natural heritage we should deliver to our next generation."

The threat certainly seems remote that the DMZ &#8212; surrounded on all sides by soldiers and barbed wire and harboring an estimated 3 million landmines &#8212; might someday be filled with highways, railways and apartment buildings.

But even though the two Koreas have been technically at war since 1950 &#8212; an armistice halted hostilities in 1953 &#8212; many South Koreans believe a reunification will come, and some think it will happen sooner rather than later.

So, in an odd twist of fate, the biggest threat to this peaceful area would be an official peace.

"I hope [the DMZ] would be retained as a conservation area. It would be a shame if it wasn&#8217;t," said Richard Widdows, a Purdue University professor spending a year teaching at Seoul National University.

"I&#8217;m just blown away by the wildlife here," he said on a recent eco-tour. "There are species here you won&#8217;t see anywhere else, and certainly not in the numbers that they have here."

A number of organizations and individuals are cataloguing the area&#8217;s various species, endangered and otherwise, with an eye toward preserving vast tracts of the DMZ if and when Korea is reunited.

Jeon, for example, has spent the past five years documenting endangered species she has seen in the western DMZ and the adjacent Civilian Control Zone, a buffer region on the South Korean side of the border. The eco-tours she leads are designed, in part, to garner public support for preserving the DMZ.

The rare animals she has spotted include white-tailed sea eagles, cinereous vultures and red-crowned cranes. Experts say Asian black bears, leopards, Amur goral, seals and otters also have been spotted in and around the DMZ in recent years.

The wildlife can sometimes provide a welcome distraction to U.S. servicemembers serving in the DMZ.

"I don&#8217;t think I&#8217;ll become a zoologist or anything like that, but I&#8217;ve found it very interesting," said Sgt. Frank Murillo, a security escort in the Joint Security Area.

He said his strangest encounters have been with musk deer, also known as vampire deer, which many believe are mythical beasts until they see one of the long-fanged creatures face-to-face.

In the summer, Murillo said, an area near The Bridge of No Return becomes a nesting area for thousands of egrets and cranes.

Murillo said that while he has yet to see or hear any evidence of it, it is safe to assume that wildlife sometimes end up on the short end in their encounters with landmines. That, he said, is his first thought any time he sees vultures circling overhead.

On an observation deck overlooking a guard tower manned by three South Korean soldiers, Jeon watched thousands of birds resting along the glimmering Imjin River in the distance. She said the Civilian Control Zone &#8212; where some farming and only a limited number of people are allowed &#8212; is already being compromised.

"When I used to come here several times per month, and I saw nature, I was comforted by it," she told a group of visitors. "But, if you look at the surroundings of this area, the habitats are rapidly being destroyed."

Pointing to rice paddies and ginseng fields carved into hillsides and recently erected military buildings nearby, Jeon said, "Let&#8217;s just leave the scenery intact, as it is.

"Far away, you can easily see the skyscrapers and the apartment buildings," she said, gesturing to the south. "If North and South Korea were reunited, and this area turns into an area like that &#8230; then the birds would not come to this area anymore, and our lives would become dry."

"I hope, like in the United States, where we have kept our park system intact, they would set [the DMZ] aside for animals you couldn&#8217;t find anyplace else."